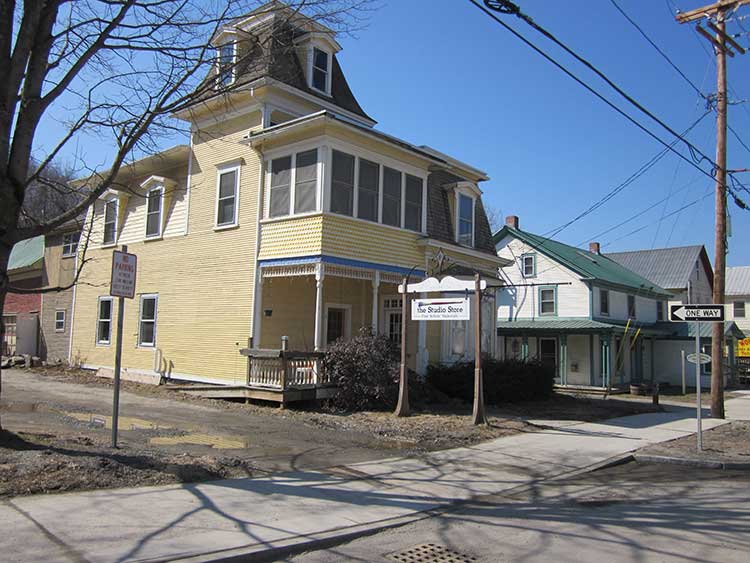 The Studio Store has moved. The long-time fixture on Pearl St. by the bridge moved to its new location on Main St, March 1. This is the business’s third site. Owner Andrea Pearlman says the original site was in a tiny room in the old Red Mill Building 27 years ago. “It was the year after the Vermont Studio Center opened, in 1985,” said Pearlman.

The local establishment stocks all the essentials for painting and drawing. Pearlman opened the store initially to meet the growing need which the founding of the Vermont Studio Center created. Shortly afterward she moved the store into her house on Pearl St.

Pearlman, who has silvery hair and a sharp, sarcastic wit, says that she doesn’t foresee any future moves. “Last move for me,” she said with a hearty laugh. “I’ll never do this again. This was brutal.”

She says that after four large truckloads, she still found inventory she didn’t even know she had. Pearlman says that she had plenty of help from friends, neighbors and clients in the move. “They were great,” she said.

Pearlman stands in the new store, which is filled with the pleasant smell of paint. Not from the tubes of new acrylics and oils lining the walls in racks like toy soldiers, but from the fresh coats on the clean white walls.

The new space has plenty of sunshine streaming through from the north and south facing windows, as well as from the bay window facing Main St. Pearlman intends to create a small working space in this sun-filled, bay window area for children. She envisions the youngsters being entertained and distracted while their parents shop in peace.

“Also, that way I can grab one of their paintings if it’s good,” she said. “Kids do the best work.”

The new store location also has much more room than her old spot, and Pearlman points out the obvious fact that the Studio Store now has a storefront on the village’s refurbished Main St. Pearlman is pleased with the recent renovations to the heart of the village, while acknowledging the downside of the construction process that many feel hurt the businesses along the corridor that tried to weather the extended process.

Pearlman, though, doesn’t think the revitalization process hurt her business at its old location much. “But the year before was the bridge [referring to the extensive renovations beside her Pearl St. site], and that hurt,” she said. “It was a tough move, but I’m happy to be here now.”

Though she’s only been in the new space for two weeks, one gets the feeling it’s been there a while. All of the wares and materials are displayed with care and an artists’ sense of flow. Pearlman, who is a painter herself, says she hasn’t had the time to paint in the two weeks since her move. She’s hoping to have things settled to a point where she can return to the canvas soon.

She said she had a little girl come in recently with 60 cents, and she sent her home with a few pencils, some paper and a smile.

The Studio Store’s new location is directly across from the Pearl St. intersection and the same familiar sign hangs out front.