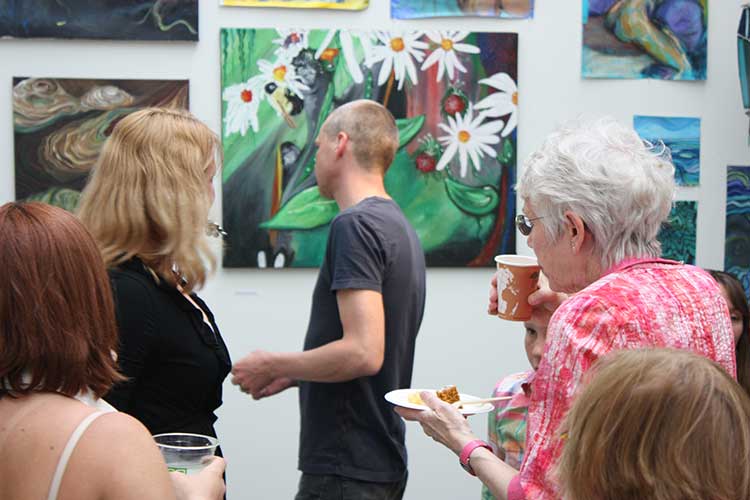 On Thursday, April 19, a crowd of students, faculty, staff, alumni, VSC trustees and administration crowded around the entrance of the new VAC building for the ribbon cutting ceremony.

President Murphy opened the ceremony with a speech thanking a wide variety of people who helped make the new VAC possible, including the board of trustees, the chancellor, the Arts and Sciences departments, the VSC and JSC Directors of Facilities, Dean of Administration Sharron Scott, the Art Department faculty, and finally, the students who would use the VAC, be they art majors or simply students exploring new areas of study. “These are the facilities you deserve,” Murphy said, and called the new VAC a “new gathering place, to take risks, to revise and try again, and to learn from and become experts.”

Moore was also impressed with the new building, saying that it now housed “really wonderful spaces.” He also said that the building was vital to the campus because “we never want to forget that the arts are important to everyone.” 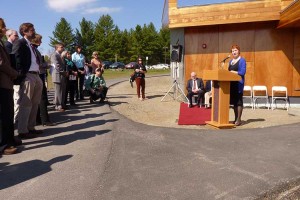 Leslie was both humorous and grateful during his brief opening remarks. “Thank you for the new building, I’m glad we tricked you into it,” he said, receiving laughs from the audience. “The building has finally caught up to the people working here.”After the opening speeches, scissors were handed to Leslie, Murphy, Donovan, and Brennan, and on the count of “three” they simultaneously cut the ribbon and officially opened the building to the crowd outside. As people streamed in, they were greeted with at least 750 pieces of student art, curated and hung by Assistant Professor Mary Martin and her students. Video installation and puppet pieces were hung in the Black Box gallery, while the main gallery was occupied solely by BFA student work. The rest of the VAC housed art by BA students or any student who wished to have their pieces viewed by visitors wandering through the building, and included ceramics, paintings, sculpture, drawings, printmaking, and photography. Refreshments were provided throughout the building, and included assorted local cheeses, vegetables, and pastries.

Each studio was also occupied by professors and students to answer questions and even help visitors to try out some art techniques for themselves. For example, guests were encouraged to create monotype prints in the Printmaking and Painting studio, and could keep the prints that they made once they were completed. 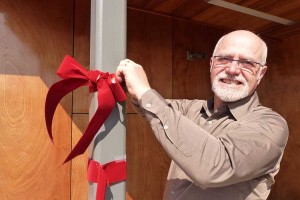 BFA students were also present at the opening. Sean Crossett, Pamela Bows, and Nikki Chicoine sat on a bench in the BFA gallery, watching visitors look at the art. “It’s really exciting because it’s usually just other art students looking at our work, and now we have more of a general public coming in and looking at it,” said Crossett.

Ethan McGovern, a Tech Theatre major, returned to the VAC to see what changes had been made. “I’m actually interested in going back to the art degree that I originally came to Johnson to get,” he said, and also speculated how he could combine his art and theatre degrees. “I’m excited to check everything out.”

For Leslie, this was the building that he finally felt the students deserved. “I started here with quite a dysfunctional program,” he said. “If you knew the old VAC, it was half of that up here [on the hill], and it was shed-like. You know, bits and pieces everywhere, just isolated classes. It was really hard to get a sense of community, which is so strong here now.” For him, to see the new building coming together was a “dream come true of a space.” Even more inspiring for Leslie was to see students flood the building with their work, and alumni from as far back as 1985 traveling all the way back to Vermont to see how things had changed. “It really is a milestone of ‘yeah, we did it!’ And we’ll keep doing it.”