Wiseman to go on paid leave after fall semester 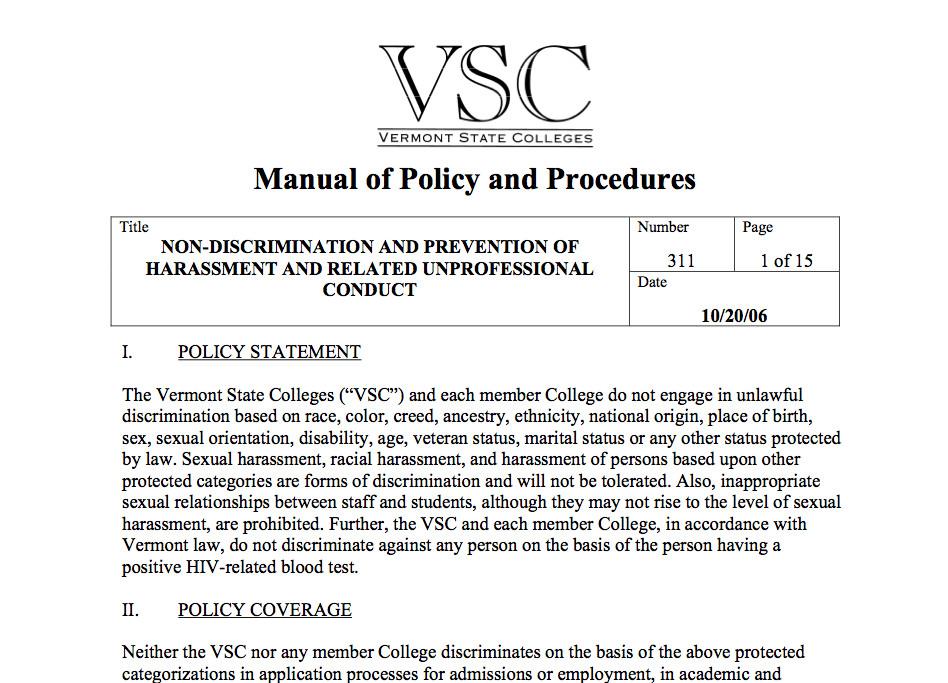 JSC Humanities Professor Fred Wiseman will stop teaching classes at Johnson State College at the end of the fall 2012 semester, according to information released by JSC Dean of Administration Sharron Scott on Friday, Sept. 14.

Responding to a Basement Medicine request under Vermont’s Public Records Law for release of documents pertaining to any severance agreement between the college and Wiseman, who has been at the center of a controversy involving allegations of sexual harassment, the College provided a copy of an agreement signed prior to the beginning of the fall semester.

Requests for three other documents filed at the same time, including the complete Policy 311 report delivered to President Murphy’s office in May, were denied, citing permitted exemptions under the Public Records Law.

An official separation agreement between Wiseman, JSC, the VSC and the VSC Faculty Federation was dated Aug. 1 “as a resolution of the disciplinary process” related to Policy 311 complaints against Professor Wiseman.

According to the agreement, Wiseman will continue to teach full-time for the fall 2012 semester, during which he will be paid full salary, but he will no longer be the Humanities Department Chair. During this time, Wiseman “will be subject to all JSC and VSC academic standards in teaching, academic advising, scholarship, and service to College and community.”

Wiseman will then be on paid leave during the spring 2013, fall 2013 and spring 2014 semesters, per the agreement, during which time he will receive half of the base pay salary he would have received for full-time service.

The agreement states Wiseman will retire at the conclusion of the 2013-2014 academic year.

Additionally, the agreement stipulates “The college will not impose any discipline on Professor Wiseman as a result of the Policy 311 complaints filed in the Spring 2012 semester. Professor Wiseman shall not retaliate in any way against any individual who initiated, investigated, cooperated with the investigation into, or deliberated on the Policy 311 complaints against him.”

In March 2012, then-JSC student Nicole Daigneault filed a formal complaint against Wiseman alleging a violation of the Vermont State Colleges’ Policy 311, which among other things prohibits sexual harassment.

An official summary of those findings from the Office of the (JSC) President, provided by Daigneault’s attorney, David Sleigh, noted, “While the investigators did not find that Ms. Daigneault’s overall academic environment at the college was objectively intimidating, hostile or offensive, the Investigators arrived at the conclusion that harassment based on sex as a protected category occurred. Further, they concluded that there is ample evidence of ‘Related Unprofessional Conduct.’”

In a subsequent letter from JSC President Barbara Murphy to Daigneault, also provided by Sleigh, a part-time instructor at Lyndon State College, Murphy said she “accepted” their findings, and that administrators would “initiate the next steps set forth in that Policy.” (See https://www.basementmedicine.org/top-stories/2012/09/10/questions-surround-allegations-of-sexual-harassment/)

In an email interview with Basement Medicine last week, Wiseman said, “I cannot make any comments about the student who made a complaint against me. That could be construed as retaliation under governing College policies. I may, however,disclose that all allegations against me were investigated and I was not disciplined in any way. I expect that if I had acted in violation of College expectations, there would have been discipline.”

In a letter to Basement Medicine accompanying the release of the August1 agreement, JSC Dean of Administration Sharron Scott noted that “ For reasons that President Murphy has discussed, we will not be able to speak about the details of the agreement. However, President Murphy offers the following general statement on the way we approach such matters:

“As the President of Johnson, as an educator and as a person, I want to be clear that I have always taken allegations of harassment and unprofessional conduct, very, very seriously. That includes conducting a thorough, objective and fair investigation when an issue arises. What matters to us in terms of resolving any particular dispute is the result. My chief goal as President is to provide a safe campus and a safe teaching and learning environment for all students, faculty and staff, while minimizing the risk of undue disruption and conflict for the community.”