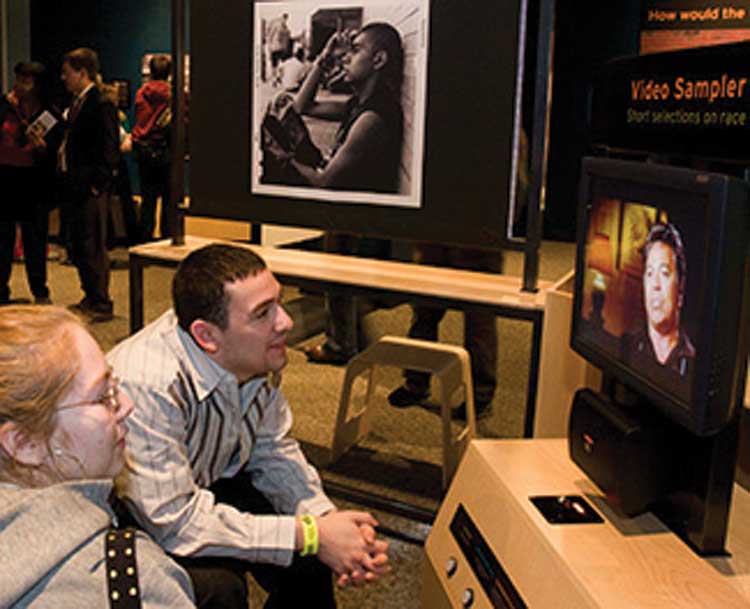 The ECHO Lake Aquarium and Science Center in Burlington will be hosting the exhibit, “RACE: Are We So Different?” until Jan. 27.

This exhibition was developed and produced by the American Anthropological Association with funding from the Ford Foundation and National Science Foundation. A flier for the exhibit states that the goal of this exhibit is to “help individuals of all ages better understand the origins and manifestations of race and racism in everyday life by investigating race and human variation through the framework of science.”

Three themes are present in this exhibition: the science of human variation, the history of the idea of race, and the contemporary experience of race and racism.

This exhibit is housed on the first floor of the Aquarium, in a large, dimly lit room. The first thing you see when you walk into this room is a wall lined with photographs, each with a handwritten answer to the question, “What Are You?”.

This is part of a traveling identity project called the “Hapa Project” founded in 2001 by artist Kip Fulbeck.

One photo is of a woman with a very light skin tone and wide-set blue eyes who is Filipino.

Another was of a large, dark man who states he is “a hundred percent black and a hundred percent Japanese.” The purpose of this project is to expose and debunk racial myths. You cannot know a person’s history, story or culture simply by looking on the outside.

Another component of this exhibit is stacks of money, large and small, representing the average amount of money different racial groups make on a yearly basis.

Whites had the largest pile, followed by Asian, which was slightly lower, then Latinos, Blacks, and Other.

The extreme difference between Whites and Blacks is astounding. For Whites, there were 34 bundles of money stacked up while Blacks only had 3.25 bundles of bills.

This exhibit also has several interactive displays. One is a map of Africa, Europe and Asia, where you spin a dial to see the pattern of migration starting in Africa and moving east towards Europe and eventually Asia.

The purpose of this display is to show that human life started in Africa, closest to the equator where the darkest skin tones are, and eventually shifted to other continents farther from the equator, resulting in the lightening of skin color.

Another interactive display at this exhibit is called “Who’s Talking”. This is a TV screen which presents first a set of six women, all of different ethnicities who take turns speaking. The job of the viewer is to guess which woman it is who is speaking, which is surprisingly difficult. They also have a set of six different men to guess at, too. “I got three out of six!” said Calley Brown, a viewer of the exhibit. “It was harder than I thought it would be though. I mostly guessed.”

This exhibit was designed for middle school ages and upward and has no specific pattern in which it must be viewed. It is interactive and interesting, keeping visitors engaged.

This exhibit also counts as a Creative Audience event and a group trip will be taking place on Saturday Nov. 10 or you can choose to take a solo trip. Tickets are free and available to students in the First Year Experience Office, Dewey Room 154.