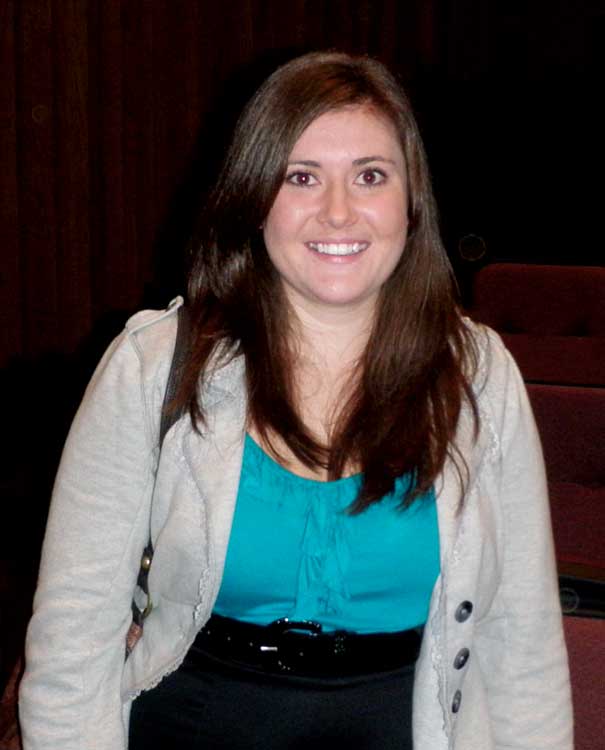 Professor of Environmental and Health Sciences Brad Moskowitz believes that internships are a critical way for students to apply what they have learned in college to a real professional environment. The evidence for that belief was on display Oct. 25, when he hosted a showcase of successful internships in Bentley 207.

“Johnson State College really prides itself on this whole idea that we can extend the classroom experience,” says Moskowitz, “that learning doesn’t just happen within the four walls of a classroom, or even just on the college campus.”

Four presenters gave speeches, each of them from a different major.

Preuss said, “Part of my job description is being responsible for a cabin of girls, as well as two junior counselors. Fortunately, I do have the opportunity to have junior counselors so I’m not overwhelmed with all the girls.”

The counselors did their best to provide a safe, fun and memorable summer, “But your job doesn’t end there,” said Preuss. “You do things you wouldn’t expect to do, like lice checks and comforting homesickness and putting on skits at lunchtime and just being crazy. That part wasn’t in the original job description, but you have no way of getting out of it.”

Many of the younger girls had never been by themselves away from home before. “There were a lot of tears and comforting that had to happen, but we all survived,” said Preuss.

Preuss feels that she succeeded in becoming a confident, positive role model and advocate of outdoor stewardship, and even impressed the camp administration.

“I was able to get a foot in the door with this organization,” she said. “I was offered a position with them this winter, which I didn’t take, but I have an opportunity to go to their leadership school.”

Next was Murielle Wronski, a.k.a. Muzzy. Wronski is a third-year Health Science, and Wellness and Alternative Medicine major, who did her internship working with kids at the Power Source Training Center in Leominster, Mass.

Wronski was passionate about her internship. “I want to be a physical therapist when I get older,” she said, “and physical therapy is a branch of rehabilitative health. They use specially designed exercises to help patients regain their physical abilities. Athletic Revolution [the Center’s youth program] focuses mainly on injury prevention.” These injury prevention workouts are geared towards each athlete and the muscles they use most.

“Some of my responsibilities were leading warm-up exercises, assisting in injury prevention techniques, assisting athletes during their workouts such as spotting, and assisting in speed and agility sessions,” said Wronski. “Each athlete is given a five-day workout cycle that’s specified to their needs as an individual for what sport they are doing, and if they have any injuries in order to heal them and not harm them.”

Michael DiTomasso, who discussed the impacts of Tropical Storm Irene on the state of Vermont, gave the third presentation.

DiTomasso’s project was unique in that it was completely independent of any employer. “I just did an independent research project to gain a better understanding of how to conduct a research project,” he said. “I was talking with Tania [Bacchus], and we came up with the idea of researching the impacts of Tropical Storm Irene on the State of Vermont.”

DiTomasso gave a breakdown of the damage the storm caused. “Some of the environmental impacts include disrupted river ecosystems, primarily from dredging, crop loss, and field erosion,” he said.

He contacted several experts for interviews, such as hydrologist Jim Ryan, who explained dredging to him.

“Dredging is how, right after the storm, a lot of roads and infrastructure were damaged,” said DiTomasso. “People couldn’t get around, people couldn’t move, so they went to the riverbed and dug up rock and streambed material by themselves to create roads and these other structures. It disrupted river ecosystems beyond repair; it really affected trout populations and created higher velocity rivers, which is leading to faster erosion.”

According to DiTomasso’s research, 406,000 feet or 77 miles of streams were dredged in Vermont.

He also estimates $10,000 worth of crop loss in Vermont over the next decade.

He then mentioned the erosion the flooding caused, and that it also increased the chance for landslides to occur in the future.

By DiTomassio’s estimates, this is the second most costly and damaging flood to hit Vermont since 1927. He encourages towns to include the risk of flooding into their infrastructure plans.

Laber made it clear that she was passionate about medicine. “I chose this major because I was always interested in the medical field,” she said. “I love studying the body, I find it absolutely fascinating. Also, my mom was a nurse, so she had a big influence on me when I was growing up. I chose to do my internship with stress testing because I had personal experience with one.”

The echocardiograms are moving pictures of the heart valves, made to search for clots and other anomalies. “It was really neat for me to first see those pictures,” said Laber. “You could see the heart beating, and you could hear it: it was just really cool.”

She reassured the audience that she had minimal dangerous exposure from the nuclear tests, which involve injecting an isotope called cardiolite into the patients so that their heart tissue shows up in a scan.

Laber got into FAHC in the first place due to her JSC course load, which includes Anatomy and Physiology and Exercise Physiology. Knowing basic EKG interpretations also helped Laber, who noted, “I thought it was really fun to recognize what’s going on on the screen, in that person’s body, which is phenomenal to me.”

Laber’s internship resulted in a job in the medical industry, as FAHC hired her as a cardiology technician. She describes it as having been “a blast ever since.”

Moskowitz encouraged the student audience to try an internship themselves. He said, “There is money for you to study Biology or Environmental Sciences here in Johnson State College. So if you are interested in those majors, there is $40,000 available for scholarships, per student, for a four-year stand when you’re here.”