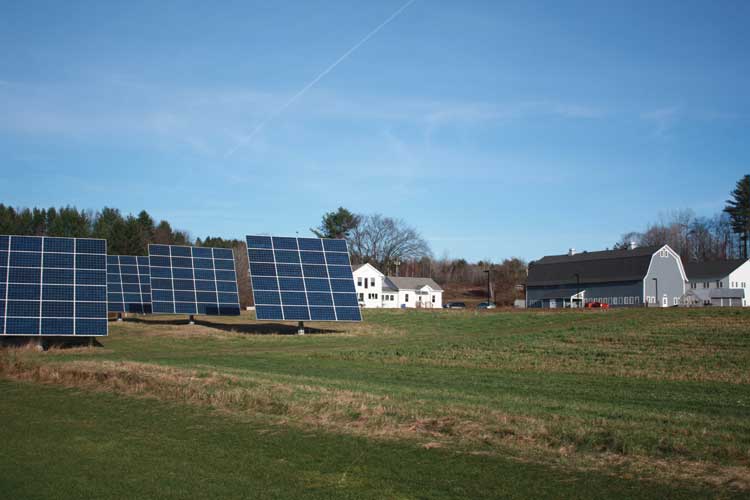 Laraway Youth and Family Services has installed 10 new solar trackers on its campus.

Laraway is a non-profit agency offering alternative education, therapeutic foster care and public school-based intervention programs to at-risk children and youth from all parts of Vermont. In 2011 Laraway relocated to a 39-acre farm in Johnson.

Located on Route 15 one mile west of Johnson village, the new campus includes a fully renovated farmhouse and a newly constructed 12,550 square foot school providing a total of 16,800 square feet of instructional and office space. Laraway leases some of the land to a neighboring farm and plans to develop agricultural work programs for its students.

The solar trackers now stand in the field next to the school. They were installed by Engineer Construction, Inc. and went live on Oct. 25.

The primary benefit of a tracking system is to collect solar energy for the longest period of the day, and with the most accurate alignment as the sun’s position shifts with the seasons. The solar tracker will produce up to 80 percent of the power used by the Laraway school.

The energy company AllEarth Renewables, which produces the AllSun trackers used at Laraway, contacted the school about the possibility of installing the solar trackers. The trackers were installed at no cost to the Laraway School thanks to Green Lantern Development (GLD), which  funded that piece of the project. GLD is a group that gets investors together to support alternative energy initiatives.

The Village of Johnson Water and Light Department was also involved in the project. They installed a new electric pole near the school, which allows the power produced by the solar trackers to feed into the grid.

Another benefit that Laraway is looking at is how the solar trackers and the solar-generated electricity they produce can be incorporated into Laraway’s curriculum.

“We hope that some of our older students may become interested enough in the trackers and solar energy to pursue careers in that field,” said Greg Stefanski, executive director of Laraway Youth and Family Services. “The trackers also symbolize our goal of empowering our children. We have now empowered our facility in a similar way by taking this step. I am most excited about the project and how we will now be able to incorporate it with our students and programs.”