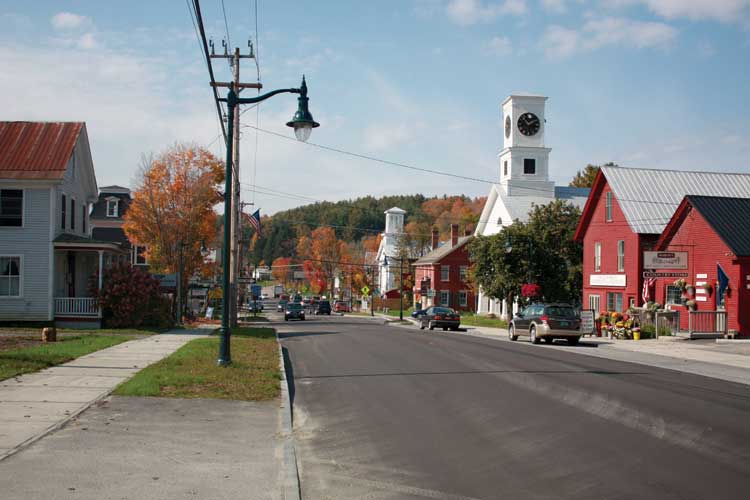 Route 15 in Johnson has been under construction for several years. The end is finally in sight with all major construction now finished and a final paving planned for the summer of 2014.

The project was originally designed to enhance the qualities of the small town, draw new business and make it easier to get around.

According to the town’s website, “Johnson Main Street Project is a downtown revitalization initiative the goals of which are to beautify the downtown, increase the safety of Main Street travelers, and enhance the attractiveness of Main Street for community and business interaction.”

Those improvements, stemming from multi-year projects, appear to have met those goals, but they have come at a price for commuters, pedestrians, and local businesses in the village.

For Dawn Locke, a new member to the Johnson Works Committee and co-owner of Northern Highlights Salon, the impact on parking throughout the project has been a major problem. “I spoke to the town about the lack of on street parking and they told me there were 49 spots before construction and there still are, though not on the street anymore,” said Locke. “There is now a community parking lot next to the art store to make up for the spaces lost. I really like the new look of town and the business wasn’t severely affected due to the regular customer sticking it out with us, but the number of walk-in clients definitely dropped.”

Karla Demars, owner of Hidden Treasures Smoke Shop, said that the prolonged construction had a serious impact on her business. “The construction almost killed us, it really hurt the business,” Demars said. “The traffic control was done on either side of the driveway, blocking the entrance, making it really hard for customers to get in here.”

With that problem now in the past, Demers says she appreciates the improvements. “Now that it’s done (or mostly) I really like the new street lights and think overall it looks good,” she said.

Abby French grew up in Johnson and moved back to town with her new baby during the height of construction. “It was a nightmare trying to take the baby for a walk, when the sidewalks were dug up and you had to walk through the backed-up traffic crossing back and forth to avoid the ditches,” said French. “I also remember sitting in traffic, and a worker from Marvin’s Maple Store coming out offering free samples to people waiting in their cars. You could really tell it was hurting the business. At one point there were signs in windows saying ‘we are open’ but it was almost impossible to get to the stores because there were no sidewalk or places to park. You couldn’t even stop because of the lines of traffic going both ways. It was just really bad.”

Despite those evident frustrations, French acknowledges that downtown is now better off. “It does look good, I really like the new street lights, sidewalks and cross walks that you can actually see now,” she said. “I think it’s a huge improvement but maybe they could have gone about it differently.”

The pain was for the most part equally felt downtown, east and west of the intersection. “The thought was good and it definitely improved the look of town but it certainly affected business during construction,” said Jim Bradford, manager and former owner of DJ’s.

Unfortunately some businesses had to close because of the project. Sweet Hollow Herbs and The Quilted Lily both closed their doors due to lack of business; people just couldn’t get to them through the construction, according to the owners.

The downtown project involved two distinct phases, notes Duncan Hastings, municipal manger for the town of Johnson. “The project had two specific components. One was the Streetscape component, which is the Village project, and the other was the Storm Water System replacement component, which was a VTRANS project,” he said.

Both projects were combined so as to reduce future impacts on the downtown and to take advantage of savings which could be derived from doing construction on both projects at the same time.

“In other words, the last thing we wanted to do was construct the Streetscape improvements and then have the state come back a year or two later and rip everything back up to replace their storm water drainage system,” Hastings said. “I should point out that the state storm water system was in a state of complete disrepair and failure and desperately needed to be replaced. This is something many people may not be aware of.”

The storm water project did not cost village ratepayers anything. Almost all of the costs of these improvements were either earmark funds or VTRANS Enhancement Grant funds.

Total cost for the project is approximately $3.5 million.

With all major work now completed, downtown businesses, residents and pedestrians are over the worst of the growing pains. The final repaving should prove much less disruptive.