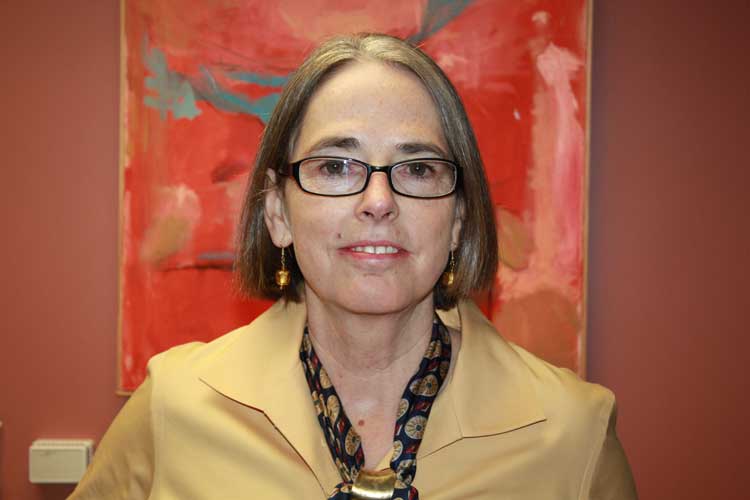 Mary Childers, author and ombudsperson at Dartmouth, brought an intensely personal first-hand account of growing up in rough poverty as she discussed her book, “Welfare Brat: a Memoir” at JSC on Nov. 7.

Her message was about much more than her book, however; she shed light on subjects like the web that poverty weaves, social stigmas, stereotypes, class, race, and her own personal struggle from poverty to Ph.D.

“Welfare Brat” tells the raw, personal story of Childers’ early years growing up in a tough neighborhood in the Bronx, in an Irish-Catholic household of seven children fathered by four different absent men. Five of the seven Childers children dropped out of high school.

Her family was dependent on welfare, government food, schemes, and under-the-table jobs to survive.

Childers’ mother battled with drinking, severe mood swings, violence and a tendency to look to men to find happiness. “We never knew if good Mom or bad Mom would come through the door,” said Childers. Though she loved her family immensely, from a young age she was determined to break the cycle of generational poverty, unlike her mother and older sisters.

“Mom was always open to reasons why we should stay home from school,” said Childers. ”People who wanted more were taunted, academic achievement and hard work brought on teasing and ridicule, not reward in my family and neighborhood.”

Yet despite all the obstacles, she realized the importance of education and lost herself in books, school and work, determined to be self-sufficient. “I wanted to take an honors class in high school and the teacher refused to enroll me based on my home life,” Childers said. “My family was the stereotype of welfare families (in the Bronx), except we were white.”

Childers went on to get her Ph.D. in English Literature. She has created an impressive career for herself ranging from Associate Dean of Arts and Sciences at Brandeis University to Director of the Office of Equal Opportunity and Affirmative Action, and Director of Women’s Resources Center at Dartmouth College.

Childers has also held various teaching positions at universities and colleges around the U.S. She has been a consultant for discrimination prevention training, equal employment policy review, grievance investigations and mediations.

She is the recipient of the Award for Civic Engagement and Leadership from the Community College of Vermont as a result of her efforts to raise consciousness about poverty in the state.

“All lives are launched or derailed by circumstances, as well as by temperamental inclinations,” said Childers. “Most of us experience a competition between the call of our best resolve and the sovereignty of our automatic selves. Nonetheless, economic and social class fundamentally influence the ways we cultivate our moments of inspiration and aspiration. In the absence of education, resources and evidence that effort pays, many poor people, such as those I love, are sustained primarily by delusion and lottery optimism.”

Childers asserted that those inner obstacles to breaking the cycle of poverty and dependence can be just as devastating as external circumstances. “I am intimately acquainted with how lack of opportunity and personal irresponsibility can become intertwined and strangle a life,” she said. “It’s clear to me that I could develop from welfare brat to chip-on-the-shoulder chick to contributing, dissident citizen because I had the good luck to come of age when many people in the United States approved of a war on poverty rather than what Herbert J. Gans calls ‘the war against the poor.'”

Childers runs workshops based on her memoir. She has collaborated with Vermont Equal Opportunity Programs, the Windsor Prison, and the United Way of Burlington, among other organizations, to address challenges and stigmas faced by the poor.

This month Childers was chosen by the Vermont Humanities Council’s First Wednesday Series to speak about her book, to help raise awareness and to emphasize the importance of education. Also while she is in the area, she is speaking to local organizations whose goals are to help underprivileged people and families including CCV students, teen moms, single parents and local educators.

She is now touring, speaking about her book and shedding light on social issues. “Nothing busts stereotypes like sitting down and getting to know someone,” said Childers. “Children need to be encouraged to learn so they can break past the stereotypes and we need to put a focus on paying attention to the child’s ability and not their background.”

That is a lesson she has learned from long, bitter experience.