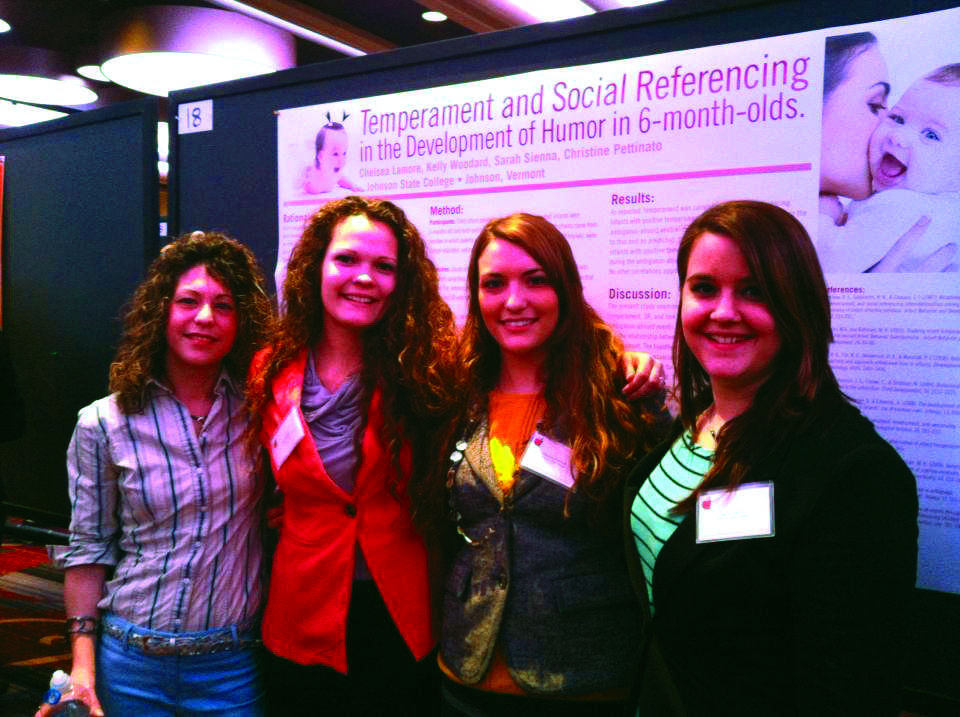 The conference took place Mar.1-4, and hosted students presenting over 300 posters on psychological research. Kelly Woodard, Christine Petinatto, Sarah Sienna, and Chelsea Lamore have been researching, analyzing, coding, and collecting data with Mireault since the summer of 2012 as part of a research project as psychology majors, and they recently submitted their findings to the EPA.

The research was on temperament and social referencing in the development of humor in 6-month-olds, and, in presenting its hypothesis, the team became a part of its field in a real way outside the walls of a classroom.

“I think the main thing is when students go to a research conference like this, it’s important to see their discipline in action,” said Mireault. “Academic disciplines don’t just live in the halls of academia.”

For some people, the conference may have felt overwhelming, but for the students representing Johnson State, the conference solidified their hopes for a future in their field. The team felt as if they were where they were supposed to be.

“It was such a unique opportunity to be exposed to the professional research aspect of psychology,” Woodard said. “I felt like a kid in a toy store. I also felt very comfortable, like this is the environment I’m supposed to be in.”

Over the four-day conference, Woodard, Petinatto, Sienna, Lamore, and Mireault attended lectures, watched poster presentations on a number of current research topics in psychology, and got the opportunity to sit in on Philip Zimbardo’s talk.

Zimbardo is an icon in psychology. He has done a lot of work in Heroism and Evil, but is most well-known for his Stanford prison experiment in 1971, in which he and his colleagues created an experiment that looked at the impact of becoming a prisoner or prison guard. He performed the experiment on college-aged adults who were normally healthy, psychologically and physically, and who knew they would be going into a prison-like environment. Zimbardo wanted to witness what would happen to each participant when thrust into the prison setting.

The trip, which was part of the team’s internship required for graduation, gave the participants a brief insight into the field in which they hope to work. According to Mireault, there may have been some sort of reward for the best poster, but that wasn’t the point of the trip. The point was coming together with other researchers in their field, and being able to contribute, because contribution is an important aspect of the college experience.

“I had a great experience,” said Sienna, “Being at the conference made me think about my goals past graduation and really solidified for me that I’m in the right field. I would absolutely do it again in a heartbeat.New York itself was great and the conference was an experience that I am incredibly thankful for.”