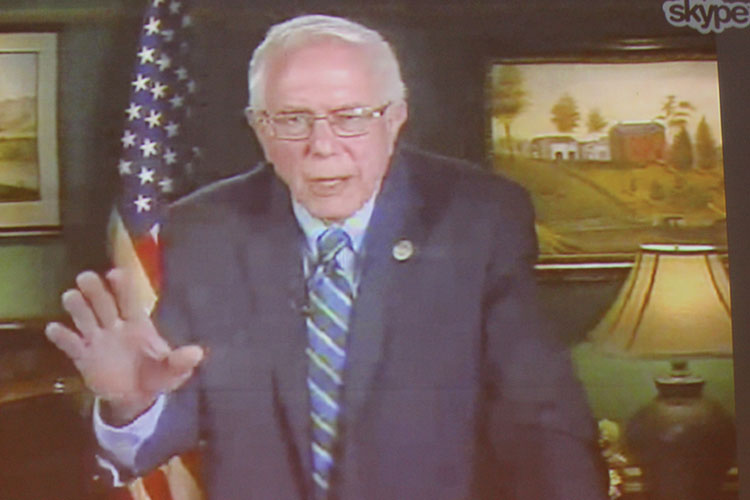 Despite technical and logistical difficulties, about 55 people convened in Bentley 207 for a Student Town Meeting, hosted by the social solutions class and Harper Gay, Bernie Sanders’ outreach assistant. Sanders’ original plan was to be at JSC for the meeting, but he was held up in Washington due to pressing business on the Senate floor.

Sanders appeared via Skype. During the question and answer period, the visual of the senator disappeared. The audio connection was basically maintained throughout the rest of the meeting. A few times the connection was lost, but without much loss of talk time.

Sanders focused on the state of the economy and environment. He discussed a disparity between employment figures: the government stated the unemployment rate is 7.7 percent, but Sanders said 14.3 percent is more accurate when including citizens who have given up looking for work.

According to Sanders, most newly created jobs are low-wage jobs on which one can’t support a family.

Sanders discussed the inequitable distribution of wealth in this country, and told the audience that the top 15 percent owns 38 percent of the wealth in the country while the bottom 60 percent accounts for only 2.3 percent of the wealth. This huge gap is continuing to widen. A recent study showed that from 2009 to 2011 all new income went to the top 1 percent. Sanders said the Walton (Wal-Mart) family owns more than the entire bottom 40 percent of the U.S. population does.

There was some conversation about social issues in the United States, which Sanders said are steadily improving. He said electing an African-American president was a huge step in social progress. The 113th Congress currently touts the highest number of female senators ever: 20. Sanders also cited the fact that medical schools are currently comprised of more female students than men.

He also said there have also been significant improvements in gay rights, and that more and more states are fighting for gay rights. Support for gay rights is increasing each generation.

Sanders, a member of Senate energy and environmental committees, said that global warming is one of the most underreported stories in the media. He said scientists have severely underestimated the exponential amount of damage that has and will occur, and that the planet will heat 8 degrees by the end of this century, causing major damage to the polar icecaps.

Sanders opened the floor for questions after his opening overview.

A student in Martha Lance’s social solutions class asked about President Obama passing the Keystone pipeline, a system to transport petroleum products from Canada to the United States, prompting Sanders to call global warming this generation’s equivalent to the Sixties civil rights movement.

Sanders had a long response when asked about the most underreported issues in today’s media.
He said that most of the mainstream media outlets are controlled by large corporations, creating a bias in news reporting.

“Look at how media had addressed some of the major issues of our time,” said Sanders.
“By the time we went into the war in Iraq, it was very hard in the mass media to hear voices of opposition. We have done some studies on this with the Sunday news shows. Almost everybody on those shows was telling us why we had to go to war in Iraq. That became the media narrative.

“If you look at another issue, which is what I call the collapse of the middle class… How often do you hear about that?

“You will. I’m not gonna tell you that there aren’t good articles in the New York Times or Washington Post every now and then. But, by and large, the fact that we are moving towards an oligarchic form of society where a handful of wealthy families, very wealthy families, control economic and political life. That is not something the media will talk to precisely because those are the folks who control the media.

“The third issue I will use is global warming. We are facing, according to scientists, a planetary crisis, a planetary crisis which is already impacting our country. All of you know what Hurricane Irene did to the state of Vt.. You know what Hurricane Sandy did to New York and New Jersey. The 10s of millions of dollars we have provided to help those communities in Vt., in N.Y., in N.J. rebuild.

“What the scientists are telling us, is that we are going to see more of those extreme weather disturbances more frequently, with more severity. Does anyone really believe that the corporate media is discussing that issue in any degree that it should?

“So media is a huge issue. Concentration of ownership in media is very important. What’s the antidote to that?

“But we need to hear a diversity of points of view out there, because otherwise you hear this parroting over and over again of the corporate perspective and the corporate perspective is, ‘Well, global warming is complicated. Some people say it’s real, some people say it’s not.’ Not true. Virtually all scientists who have studied it understand that it is true.

“So media is a huge issue, and you can agree that we can start with alternative media.”
For more information, visit Sanders’ website is sanders.senate.gov.