First Relay for Life at JSC 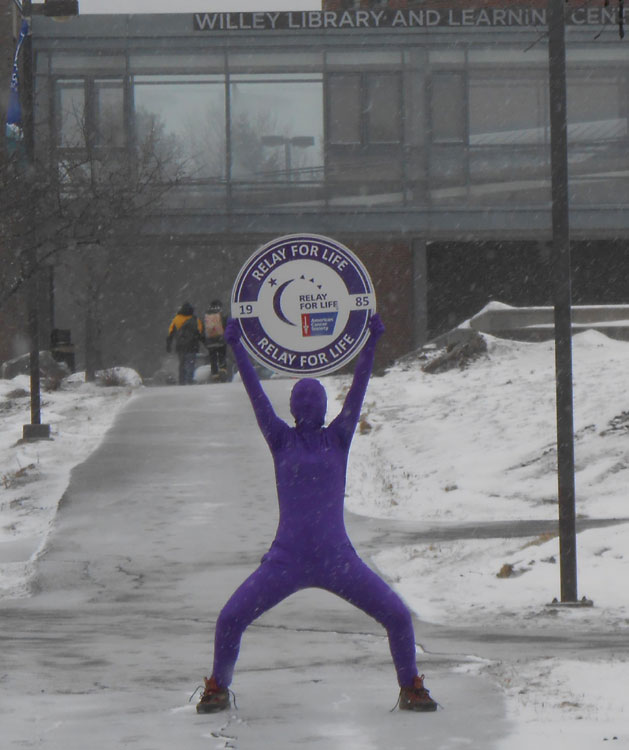 Drumming up support for Relay for Life

Community support has allowed the American Cancer Society to bring a Relay for Life event to the Johnson State College campus May 3-4.

Relay for Life is a walk in honor of cancer survivors, to remember loved ones lost, and to simply fight back against the disease that, according to the American Cancer Society, is expected to claim 580,350 Americans in 2013 alone. That’s almost 1,600 people per day.

The event is being coordinated by Donne Rae Decatur, community executive of development for the American Cancer Society (ACS), alongside Coordinator of Student-Athlete Development at JSC Kristin Cannon, and any students who express an interest.

“This is the first ever Relay For Life held at Johnson State College,” said Cannon. “I think it shows the commitment and passion of our students, faculty, and staff to host an event that is new to our campus and to work together for the same goal. Our students have really been the leaders in bringing this dream to a reality and we hope that the entire community supports and celebrates this amazing event.”

A kick-off meeting was held Mar. 25 to raise awareness as well as to register teams. Thus far 21 teams have joined the cause, bringing the total number of participants to 121. The goal is for each participant to raise $100 toward cancer research by accepting donations or by holding fundraising events throughout the community.

Seventy cents from every dollar that is donated or raised will go towards cancer research, and much of the remainder goes toward establishing camps for kids with cancer such as the Hope Lodge in Burlington which houses cancer patients while they go through treatments.

As an added incentive, the SGA pledges to award $500 to each participating club that raises $100 per person on their team.

“Our campus has done a great job of turning this cause into a passion of theirs and hopefully we can get up to 200 participants!” says Cannon.

Everyone has a different reason for taking part in the 12-hour walk, from 6pm to 6am, which is representative of what patients go through over the first 12 months after diagnosis. Being an overnight event is also representative of the emotions that people experience through the course of their treatment, as they begin to feel weak and tired, but continue to find the will to survive. The point is to join together as a team and as a community to help fight for a world with more birthdays.

“My primary reason for relaying,” says Johnson’s Cross Country Team Captain Steven Lamonde, “is my grandparents, three of whom have or have had cancer of various types. My grandfather passed away late last year, and he is the primary reason I relay.”

While Lamonde relays to remember a family member who lost his battle with cancer, JSC Peer Mentor Team Captain Kelsey Lamphere joined the relay in honor of a survivor.

“I relay for my grandmother who is a survivor of uterine cancer,” she says, “As soon as I heard that Johnson State was hosting Relay for Life, I wanted to get involved to walk, not only for my strong and healthy grandmother, but for those who didn’t survive their cancer battle.”

Everyone has a story about someone in their lives that has fought cancer, whether they were a family member, a friend or simply an acquaintance, but nobody expects the disease to hit so close to home, and spread as rapidly as it often does.

“I became involved with Relay for Life here at Johnson,” says Women’s Soccer Team Captain Stephanie Fay, “because my uncle was diagnosed with cancer about four months ago, and it’s continuing to spread throughout his body. I became involved because I wanted to raise money for him and other cancer patients.”

Collectively, the 21 teams of various sizes have rallied just over $1,500, and they still have a month to go. The women’s soccer team with Stephanie Fay as their team captain ranks first in terms of money raised, with a total of $520. The individual, though, who has raised the most money is Women’s Soccer Team Member Kyleigh Joseph, having raised $315 with the help of her sponsors.

There is still time for new teams to form, and anyone can register or donate to a team online at www.relayforlife.org There will be a late registration fee of $10 per person to be paid either online or at the start of the event on May 3.