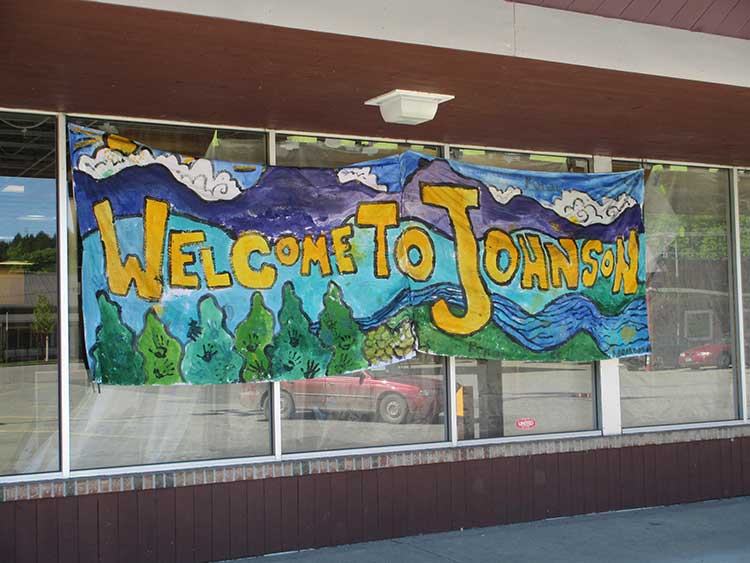 It has been a long wait for residents of Johnson, but the lease has been signed, and work has begun on a new grocery store in the downtown shopping plaza.

“I am delighted,” said Town Manager Duncan Hastings. “I’m getting my shopping list ready as we speak.”

The lease agreement between entrepreneur Mike Comeau and Pomerleau Real Estate was signed at a ceremony outside of the store that was attended by Governor Peter Shumlin as well as other state, local and federal officials on Monday, May 6.

The former Grand Union building that Comeau will renovate has sat vacant since the flood in April 2011 and has been a tremendous loss for many community members unable to make the commute to Morrisville.

Renovations on the building are to be extensive. “Right now we are in the middle of doing all of our demolition work inside the store,” said Comeau. “It will be completely renovated from top to bottom; about the only thing that will stay is the shell of the building. We are putting in a new ceiling, new flooring, all new restrooms, new plumbing, new refrigerated cases, new wall coverings,  and new paint. It’s really a 100-percent renovation, and the outside of the building will get a nice clean look as well.”

Cost-wise, Hastings writes in a town newsletter, “Through the grant writing skills of Community & Economic Develoment Coordinator Lea Kilvadyova, the town secured a $500,000 grant from the state’s Community Development Block Grant program, which will be loaned to Mike Comeau for store equipment. In addition, Pomerleau Realty is going to be doing approximately $400,000 in improvements to the facility and Mike Comeau will be investing over $1,000,000 in his store.”

Comeau has a similar vision in mind for this store as he has in place at his two other stores in Richmond and Waterbury, “It’s going to be a simple, straightforward grocery store,” said Comeau. “It will have all new equipment, all modernized and energy efficient as possible. It will be a nice clean easy-to-shop store.  We are going to try to offer all the staples at very competitive pricing, and we’ll also have some of your co-opy , healthy, natural, and organic products in there as well. We will also stock as many local products as we can. I’m really excited about it.”

Not only will this new grocery store provide closer shopping for town residents; it will be offering up to 40 full and part-time positions, and will also contribute in other significant ways to the local economy. “The Grand Union when it was in that shopping center was a fairly large user of water, sewer, and electric utilities,” said Hastings. “So we’ve actually seen the loss in revenue in the water, sewer, and electric departments from having lost that business, so that will be good, to regain that revenue for the utilities. The work being done on the building will also increase the tax rolls. And the town is probably going to issue a tax stabilization agreement for the first few years of operation but certainly after that it will be a nice addition to the tax base.”

Comeau says he hopes to open in August, but he is concerned that date may be a little too optimistic. “But it is definitely going to open sometime late summer,” he said.

In the meantime, Johnson residents can at least console themselves with the thought that better food shopping times are definitely coming.