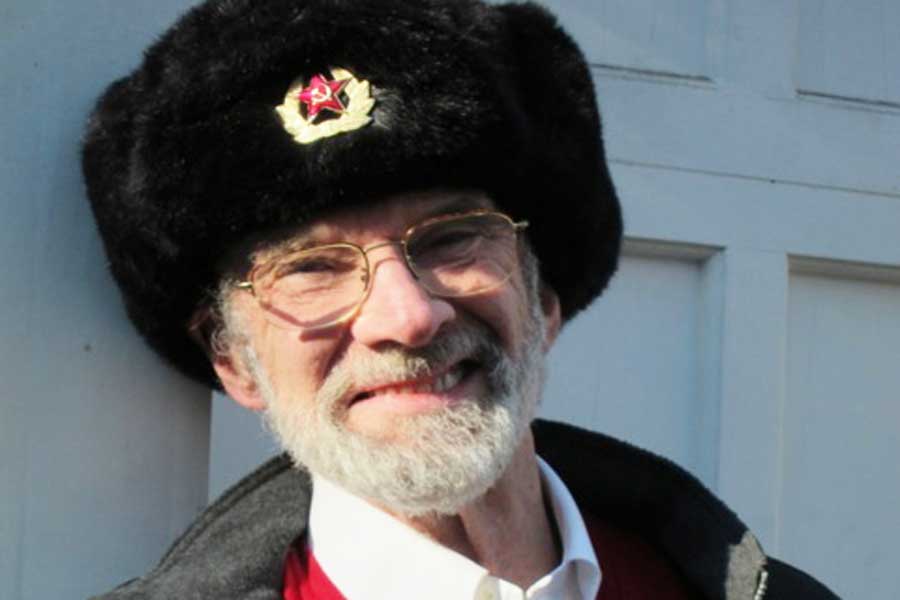 Former JSC Humanities Professor Eugene Sapadin passed away on Thursday, Sept. 19, at the Vermont Respite House in Williston. He was 73.

Sapadin taught at JSC for 39 years before retiring in 2011. The mystery surrounding his life prior to his arrival at JSC was one component of his famously enigmatic persona.

Rumors swirled around him, none of which he actively discouraged during his nearly four decades at the college. It was theorized that he worked as an engineer on a nuclear submarine—that his occasional forgetfulness was a consequence of nuclear radiation.

Some asserted he was one of Ken Kesey’s Merry Pranksters.

Sapadin did or did not author Hollywood screenplays; he was or was not part of the Witness Protection Program, seeking refuge in Vermont.

When asked to comment on these rumors in a Basement Medicine article about his retirement, Sapadin said, “Under advice of counsel, I’m pleading the Fifth Amendment. I think that’ll be a good Sapadin quote anyway.”

Tony Whedon, a former JSC writing & literature professor and Sapadin’s friend since the 1970s, said his deepest secret was this: “his big heart.”

“He was a sweet man,” Whedon said. “Brilliant, funny (and pun-filled to the point of exasperation), beloved by the students—even those he flunked, who often re-enrolled in his classes. He was something of an enigma to his colleagues, and I’m sure he liked it that way. He brought to the college class and panache, and a sorely needed sense of irony about our situation.

“Twice Gene and I taught a class in Dante together, wading through the fires and ice storms of Inferno, and ending up in the lofty climes of Paradisio, the last of which we both found excruciatingly boring. Teaching Dante with Gene was one of the most exhilarating experiences of my life. He did the philosophy and history, I did the poetry. I suppose the students enjoyed more our Mutt and Jeff act than they did our rather discursive lectures and discussions. I worked like hell to prepare for class, but Gene’s lectures rolled out without notes—effortlessly. There’s no way to describe this journey we took together, except to say it was a sort of capstone to our friendship.”

A favorite saying among Sapadin’s students was that Sapadin made them “think with a capital T.”

During Sapadin’s tenure at JSC, there was a popular beer pong move at student parties known as “The Sapadin.” The move required a foot, at waist height, placed on the table when shooting.

Sapadin was prone to throwing items into the trash can from the opposite corner of his classrooms—and hitting the mark. Sapadin told interested students he played baseball at Middlebury in the 1960s, although when pressed admitted he wasn’t particularly good, doing so with the grace of “a six-foot-six baby giraffe running around.”

He was known for using “out there examples” to illustrate his teachings, including, but not limited to: murder, cannibalism, rape, dismemberment of coal miners, and sexual intercourse with sheep.

“[These examples are] all kinds of things,” Sapadin said at the time of his retirement, “but then we relate them back to ethics, or you relate them back to philosophy. Will robots ever be able to think? Will we ever think of them as human? That’s something we [talked] about.”

Sapadin’s uncensored examples were known to occasionally offend students, though often included himself as the villain in his examples to defuse the potential offensiveness.

He would often begin examples like this: “So this is the sex slave market, and I’ve just kidnapped a few people…”

JSC graduate Kevin Paquet remembers Sapadin was a polarizing figure, though the majority of his students seemed to love him. “It was all a question of style. He was a very tall man who made very big gestures. He had this habit of marching up to the front row of desks and planting a shoe on one of them like Captain Morgan, always without losing the narrative he was telling.  I kept a tally one week for fun, and in one class he did it a total of 25 times.

“The minority faction of students unhappy with him used to say things like, ‘He’s making this up’; or, ‘He doesn’t know what he’s talking about.’ I ended up deciding that I didn’t care if he made stuff up. As for not knowing what he was talking about: I first met him in a philosophy class. I don’t think I could trust a philosophy teacher who thought he knew everything.

“He was always very private. When I was part of the paper there was this series called ‘20 Questions for…,’ where journalism students would interview faculty and staff for the paper. One of us asked him if he’d be interested and apparently got a flat “no” for an answer. Sapadin had a public side, but he also had a private side, and there’s no doubt in my mind which one comprised the majority of him. I wish I could have known more, but I’m grateful for what he shared.”

John Duffy, Emeritus Professor of English and Humanities at JSC, taught at the college until 1990 and was a longtime friend of Sapadin. “In the 1970s, Gene took two leaves-of-absence from Johnson to teach philosophy at the University of New Hampshire and the University of Alabama at Mobile,” he said.” “Faculty meetings were noticeably boring without his special wry humor.”

Duffy and Sapadin co-taught American Popular Culture in Film and Fiction for 10 years. “During those 10 years about a thousand students took the course, he said. “It soon acquired a subtitle: ‘Cowboys, Crooks and Lovers.’

JSC President Barbara Murphy notes that Sapadin was a major intellectual presence on the campus with a far-reaching influence on generations of students.

“Eugene was smart and quirky, extremely well read, and believed that an education ran very deep,” she said. “He always tried to teach what deeply mattered about the human condition. He believed strongly in the power of dialogue as a way to come to new understandings.

“I couldn’t always predict what Eugene would have to say; in fact, I rarely could. But, I came to appreciate that words and meaning mattered to him greatly. I remember a talk he gave at a senior class dinner about eight years ago. He was chosen by students as a favorite professor. I can’t quite remember what he spoke about. But it was all in rhymed couplets.”

Following the announcement of Sapadin’s passing, the JSC Facebook place was flooded with rememberances and dismay at learning of his death.

JSC Staff Assistant Sandra Noyes wrote, “I haven’t stopped crying since I received the news of Gene Sapadin’s passing. I am the staff assistant in the department Gene was part of. A day never passed when he didn’t come in my office to discuss events that were going on in his life or mine or even in the general world. He would always turn the conversation around to make me think of the answers to ‘What if?’ He was there for me after the loss of my husband and very happy for me when I started a new life with Wade. He was at our wedding smiling like a proud dad.”

Many students weighed in as well, all pointing to some facet of this quirky professor that left a lasting impression. “Gener was one of the most ridiculous and brilliant people I have ever had the pleasure of knowing,” wrote Sarah Golden. “He remained a close friend for the years following my time with him at JSC. My heart is breaking along with everyone else who ever had the honor of loving him. The thought of him never gleefully shouting about Occam’s Razor with his grasshopper leg bent at a right angle at the knee and perched atop a desk is…inconceivable.”

Associate Professor of Writing and Literature Tyrone Shaw shared a friendship with Sapadin that went back nearly 40 years. He was, said Shaw, a kind, generous, and loyal friend among many of his other attributes. “That he’s gone seems impossible,” he said. “He was Sapadin, for God’s sake. But reality intrudes, reminding us of why we need philosophers, and why we needed Sapadin.

“He was one of the main reasons I came to JSC in 1993 – he and Tony Whedon. ‘You should come here,’ he said. ‘You’d enjoy it, and they would enjoy you.’ Like so much of what Gene said, that turned out to be absolutely true…I’m sure about the first part anyway. Yes, he was dazzlingly brilliant, but he also had the master teacher’s gift of making difficult abstractions understandable. He cared deeply about his students and that feeling was reciprocated. Watching him teach was a revelation.”