Community Journalism Day: technology changes, but the power of the press remains the same 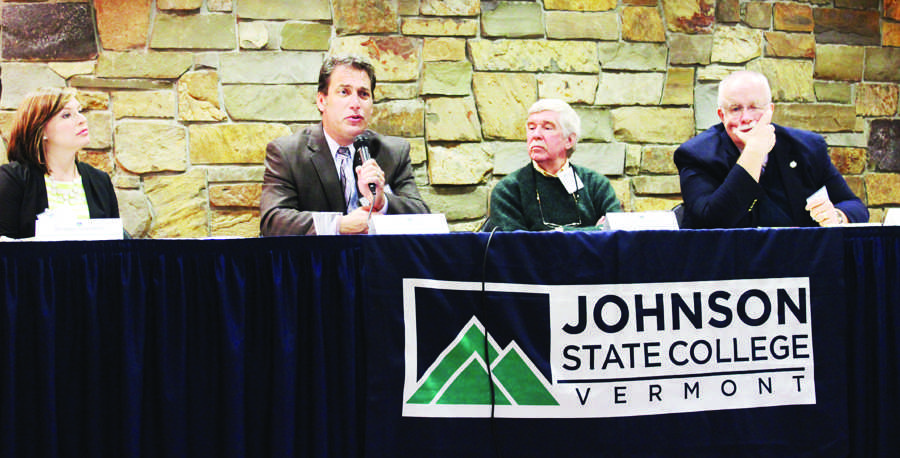 Community Journalism Day attracted exactly the sort of curiousity that the day’s panelists said is the crucial ingredient in journalism.

The day consisted of four panels and a keynote address, held Fri., Nov. 1, in the Stearns Performance Space.

Many of the attendees were high school students from Brattleboro and BFA.

Mike Donoghue kicked-off the conference, speaking about his 45-year tenure as a journalist.

Donoghue has been a sports, news, crime, police and general assignment reporter for the Burlington Free Press for 45 years.

He has also been an officer/part-time Executive Director for the Vermont Press Association for the past 35 years, and has been an adjunct professor of journalism at the Saint Michaels College for 30 years.

Donoghue was recently awarded the 2013 Sevellon Brown AP New England Journalist of the Year award for his investigative series on a Vermont State Police sergeant who falsified time cards and traffic tickets.

“I have won some awards,” said Donovan, “but this one pleased me quite a bit, because this was the first time they chose from TV, newspaper and radio together.”

“I was fortunate to have some excellent mentors during my time and I was fortunate enough to have one educator in particular that took me under his wing,” said Donoghue. “He told me I was going to write for the student newspaper…I became a sports writer…and by fluke I happened to be at the Burlington Free Press one day and I said to the sports editor that if he needed any help I was available…So I got hired as a senior in high school.”

Donoghue said he loves working as a journalist because he gets paid for his curiosity, because, he said, when you are a journalist, you can ask anyone anything.

Donoghue also defined news as “the unique, the unusual, and the need-to-be discussed.”

“As we often say, you are writing the first draft of history,” said Donoghue.

Donoghue advised that anyone aiming to be a journalist should “write, write, write, and read, read, read.”
Donoghue also stressed the importance of accuracy, and said that not everyone tells the truth.

“News is like music,” said Donoghue. “It is always present in some form, but it is ever-changing.”

Donoghue finished his address by advising “you are going to face a lot of forks in the road, and whether you take a left or you take a right, take it with gusto. Head forward and just see where it leads. It lead me to a lot of different places.”

After Donoghue’s keynote address, the first panel of the day was “Disruption and Adaptation: How Local Media are Adapting to Changing Technologies and Reader Demand.”

On this panel sat Burlington Free Press Web Editor Philip Tortora, founder and editor of VTDigger.com Anne Galloway, WCAX’s Steve Botari, and Addison Independent’s Angelo Lynn, who discussed experimentation with new forms of media such as Twitter, as well as video experimentation, mobile apps,  and targeting different demographics depending on which form of media they choose to use.

Galloway acknowledged that the way people are viewing news is changing. They are reading less, and also want to take less time to gather news information.

For this reason, news outlets try to get out news faster by breaking stories on Twitter, with a link to the story posted later.

“I think you’ll see us going into more multimedia in the near future,” she said. “People are consuming news more and more in new ways. That’s just going to continue to evolve as technology evolves…It’s our job to adapt.”

Lynn said he may be the dinosaur of the panel, but the Addison Independent has also created a mobile app system. Its staff sends out newsletters as the news breaks, and is searching for more ways to reach out to the community.

However, Lynn continues to be a proponent of print media, of hardcopy. He’s not a believer that newspapers are dying, even though the audience is shifting to digital news.

Lynn said his biggest fear is that people, especially young people, are not reading stories that they don’t think that they want to know.

“The whole art of a newspaper used to be headlines, pulled quotes, all those sorts of things,” he said. “Photos that drew you into stories you didn’t know you were interested in. So you read them, and you became better-rounded.”

Botari said that today, you have to know your demographic, and readers’ preferred news medium.

Additionally, living in a small town means that everybody already knows what is going on, but they don’t know the context. Start breaking down issues into manageable information so people can really understand why what’s happening is happening.

Another topic of discussion was how to pay for the news that readers want. Lynn said too many people believe that information should be free.

He said we have to be willing to pay for things, because printing a paper and paying reporters costs money. To draw in readers, the Addison Independent gives viewers 10 percent of a story free on the web, and then ask them to pay for the rest on a subscription basis.

The second panel, “Where the Sun Don’t Shine: The Fight for Access to Public Records,” explained why journalists have to keep at a story until gaining access to information needed to tell the story accurately.

Donoghue’s best advice was to learn how to tell when sources are spinning a story in their favor. He said public officials often hire professional media flacks to point the reporter in different directions, and away from where the real story might lie.

An example of this came from Shanahan, who told the audience about a story she was doing on Laurentian Aerospace in Plattsburgh.

With the economy at such a low in northern New York, people began going to school to work for this new company that was supposed to be built in their town. Shanahan said she found the company had major financing problems. There were lawsuits, and it was clear that the aerospace company wasn’t coming any time soon, but town officials didn’t want to say that.

A press release from the town said that they were really excited to welcome the new company.

“They kept saying that they were going to begin construction and start hiring people, but they’re not there,” Shanahan said. “Sometimes you have to read into things further and connect the dots on your own.”

Ultimately Shanahan did a simple Google search on the company, and found the gaps in their story, but she could have also acquired the information through a public records request.

Public records request, according to Picard, can be submitted by anyone, journalists or otherwise. He advised students to keep pursuing a story until they get the information they’re looking for.

The problem with public records requests, though, is that some people don’t leave a paper trail.

Following lunch was “What You Need to Know: What Media Professionals Seek When Hiring New Journalists,” which included panelists Bethany Dunbar, managing editor at the Barton Chronicle; John Dillon, news director of Vermont Public Radio (VPR); and Matt Kannar, of the Stowe Reporter.

“I have been thinking about this question ever since Tyrone asked me to speak on it,” said Dunbar. “And what I keep coming back to are certain personality traits, as much as skills. You obviously need to be able to write, writing is critical…you need photography, and video skills, which you can learn, but also there are certain personality traits that really help you in this job, traits that you can cultivate. The biggest one is curiosity, I can’t emphasize that enough…that’s what it’s all about:  you want to know what is going on. You want to know what the government is doing, what businesses are doing, and you are willing to be open-minded about it.”

According to Dunbar, internships are a great way to make connections, even if they are unpaid, because they can often lead to jobs.

Dunbar also said that being an extrovert is an important part of the job, because you can’t be afraid to ask the dumb questions.

Next Kannar spoke about the competition within this field, and how important it is to get your resume noticed.

“My suggestion would be to keep and maintain any contacts that you make in this industry, whether it be high school teachers, college professors… if you do an internship, keep in touch with your superiors at the newspaper, because the thing that is going to help me get one of those resumes to the top of the stack is if somebody like Tyrone calls me up and says, ‘Hey, I heard you’ve got a job opening, you should really consider this person.’

“That person is immediately going to get special attention, and is going to make my job easier as I am making the selection process. So the first step in the process is getting your resume noticed. That would be my top piece of advice.”

Dillon said it was valuable, but not crucial, to have a degree in journalism, and how that can help when finding a job.

“Nowadays having seen what is actually taught in journalism in terms of computer-assisted reporting, everything to do with new media, the tools that are available now to find information, that kind of training is helpful,” said Dillion. “And I don’t want to hire the smartest person in the room either; I want to hire the most curious person in the room. I want someone who wants to go find out things.”

Next the panelists listed off “deal-breakers,” qualities that would lead to an unsuccessful journalist in the newsroom. Among those qualities were being “wishy-washy,” cocky, using the job for personal gain, inaccuracy, bias, plagiarism, and lack of creativity.

The panelists listed the following as desirable qualities: being self-motivated, tenacious, compatible within the group dynamic and to have a certain moxie.

“No one wants an Eeyore in the newsroom,” said Dillon.

The final panel, “Still Indispensable,” involved Steven Pappas, the editor of the Barre-Montpelier Times Argus; Jennifer Hersey of the Orleans Record; Tommy Gardner of the Stowe Reporter; and Bethany Dunbar of the Barton Chronicle.

The panelists discussed the role of journalists in promoting and maintain communities’ civic health.

Pappas said that when he began working as editor of the Times Argus, he thought that, to remain current, the Times Argus would have to focus on “more issue-oriented stories. So instead of covering just the meeting, we decided to cover the meeting and the implication of the meeting, do the review but really hit the issues harder.”

“You can put as many names and faces in the paper as you want to,” Pappas said, “but it has to have some meaning.”