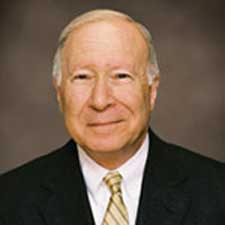 Diamond, who serves on the VSC board’s Finance and Facilities committee, is a former three-term Vermont attorney general and Democratic party candidate for governor. He serves on the District 5 commission of the Vermont Natural Resources Board and is chair of the Vermont State Employees Credit Union board of directors. He is also a senior advisor to the law firm of Diamond and Robinson and a former member of the board of trustees for Vermont Law School.

In an Oct. 8 letter to the Johnson State College community, VSC Chancellor Tim Donovan announced Diamond’s appointment and then laid out the anticipated process for the upcoming search.

According to Donovan, the soon-to-be appointed committee will recommend at least two finalists to the VSC board by the end of February, 2015. Donovan noted that initially the committee’s efforts will be confidential. “As has been past practice, the early stages of the search will be conducted confidentially,” Donovan wrote. “Confidentiality is assured to attract the best possible range of candidates, some of whom will not apply if their interest is considered public information. Consequently, the early phase of identifying candidates to be invited to the college will involve only the search committee. Once candidates have accepted an invitation to come to the college, their names will be made public and the subsequent process will involve any member of the Johnson community who wishes to participate.”

A search committee will be charged with recommending two or more finalists to the full Board of Trustees for its consideration by the end of February.

In his letter, Donovan stressed that the board’s intent was to have the college community’s input in multiple forms: directly through the members of the search committee and through feedback following the finalists’ visit to the campus.

Following the search process that was used to select current Lyndon State College President Joe Bertolino, Donovan said this search committee will consist of 13 members: five trustees, five JSC members “who bring faculty, staff and student perspectives” to the table, one community member or alumna/us, the president of another VSC institution, and the current chancellor.

Assembly chair, Associate Professor of Writing and Literature Tyrone Shaw, said he had communicated the Assembly’s recommendation to the chancellor, noting that the suggestion was “in addition to, not at the expense of” other search committee members. “It is the Assembly’s strong feeling that a robust representation of full-time faculty in the upcoming process is appropriate and necessary,” he said.

Some of the search committee, including Diamond, former board chair Gary Moore, and Tim Donovan will be on campus Thursday, Oct. 16, to solicit suggestions for participation on the search committee. “I expect we’ll be talking about the Assembly’s recommendation at some point during the group’s visit to the college,” Shaw said.

Diamond, Moore, and Donovan will host two open meetings during their afternoon visit, one from 1:30-2:30 and another from 2:45-3:45. Both will be in Stearns Performance Space.

The group will also meet with Dean of Academic Affairs Dan Regan and department chairs at 4:00 during the regularly scheduled Council of Chairs meeting.

In his letter, Donovan also asked for input from the college regarding the qualities it seeks in a new president, specifically for the committee “to hear your thoughts on the search process and suggestions as to qualities and skills the board should be looking for in a president who can lead the college into the future. Your ideas and input will help shape the characteristics by which the search committee and the board evaluate candidates.”

Donovan said he hoped to have advertisements for the position in regional and national publications by the end of October.