Mtn. bikers ride past the bumps and berms 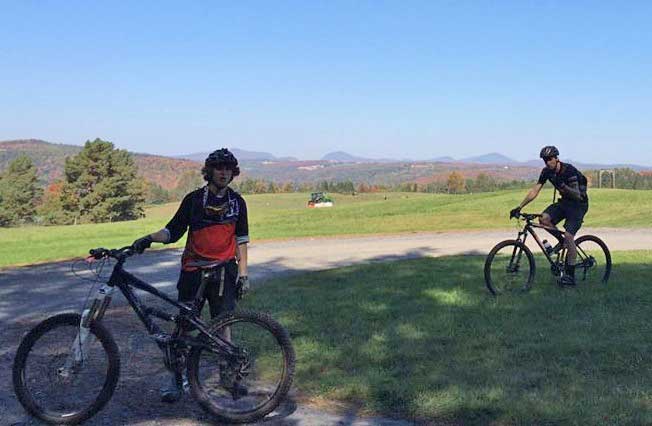 The difference between planning and execution is vast. It is the unforeseen event frequently transforming into the unforgettable memory that makes mountain biking much more than simply peddling through the woods.

Stowe, Vt. is known in the mountain bike community for its creation of Cottonbrook, the first marked mountain bike trail in Vermont. Since then, the technologies involved with mountain biking have advanced as well as the popularity of the sport. Over these years Stowe answered this advancement with the creation of miles of maintained trails, some of which are in the same area as the original marked trail.

This past Monday, I attended the JSC Mountain Bike club’s weekly ride at the Cady Hill trail system in Stowe. The group was small, consisting only of Zach Levy, Lucas Peduzzi, and me. We showed up later in the afternoon, around five o’clock, and the parking lot was reasonably full. We unloaded our bikes and decided to start heading uphill immediately to find a decent downhill section.

The Cady Hill trail system is laid out over a 320-acre plot of land and has slightly over 800 feet of vertical descent. The enormity of this trail system was apparent during the ride, as we saw almost no other bikers.

After reaching the top of the climb we took a quick break before making our first descent. The trails at Cady Hill are machine made and this was noticeable when riding them. They are well laid out and the riding is smooth. The somewhat complex mapping of the trails throughout the woods helps Cady Hill stand out from other trail systems in the area.

On this downhill stretch, the bumps, berms and jumps combine to create a flow through the open forest that is difficult to match digging trails by hand. At the bottom, our rear tires skidded to a halt in fallen wet leaves. The leaves cover some of the trail, yet in the center where most of the bikers tread, the leaves have been pushed aside, creating a line that weaves through the fall forest like a brush stroke.

One last exhausting climb and we came to the lookout point at the top of the hill. A vantage point across the tree line was cleared to open a full view of Stowe Mountain. From a low branch hung a two-person chair from one of Stowe’s lifts. This was the perfect place to rest and crack open our water bottles.

The next downhill section was more technical, with exposed roots and rockwork. The trail led us right to the parking lot, where even more cars were parked than when we started the ride. It was almost dark. With winter coming soon, the sun sets earlier
so late afternoon rides frequently go into the dark. Leader of the ride and newly appointed president of the JSC Mountain Bike club, Zach Levy, explains future plans for the club.

“Sure, the days are getting shorter and so are the rides, but we still had a turnout and ride at one of my favorite places, Cady hill,” said Levy. “This is the same place where a few of our club members led a ride for the Stowe Leafblower classic that was held by the Stowe mountain bike club a few weeks ago. We did a short loop that included most of our favorite trails like bears run and their newest trail, Florence. We are now gearing up for the spring as our season comes to an end. Plenty of things to come.”