JSC students get Serious about Science 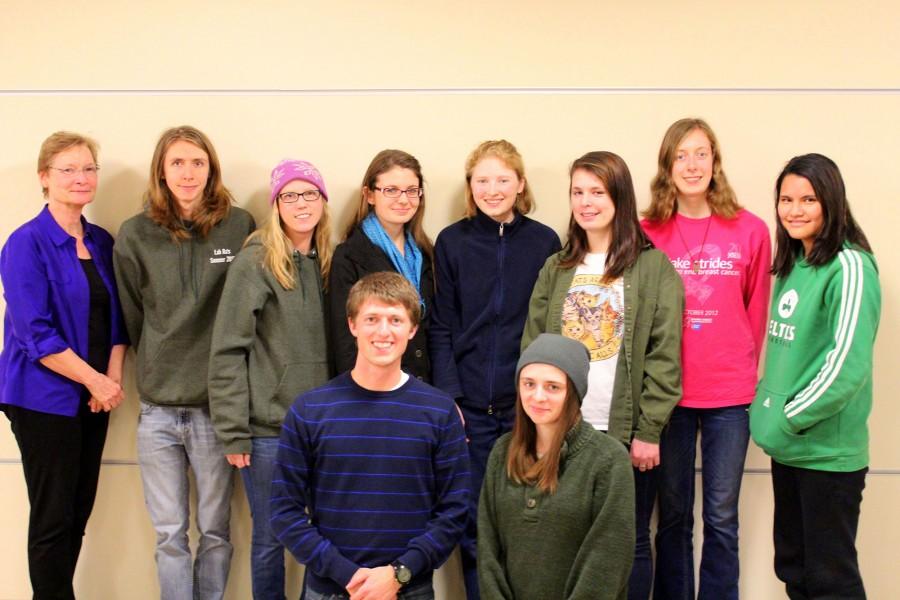 It is late Monday evening, Feb. 1, and the Serious About Science club is migrating across a freezing quad from their usual weekly meeting place in Bentley Hall, room 200, to convene in the basement of Governors Hall.

Excitedly, they converse while filing into Governors, arms loaded with reams of construction paper and bags of various ornamentations including Avengers-themed stickers, glitter, and pipe cleaners of assorted colors.

They are crafting one-of-a-kind Valentine’s Day cards packed with science-related puns to sell, in order to fund potential trips to the Boston Museum of Science, plan experiments, and facilitate student-friendly events such as a cornstarch slime slide.

The adhesive responsible for bringing the club together on this evening, however, is the desire of each member to foster a sense of community among all Johnson State students with an interest in any subdiscipline of science.

While part of the club’s founding can be traced to the SGA, its first few steps were conceived, appropriately enough, in the lab.

“All of the summer science interns that were here were a part of a group called ‘lab rats,’” said club member Shavonna Bent. “So we met every two weeks throughout the summer. At each meeting, we would read an article or someone would present their research that they were currently doing, and we would discuss it and have scientifically-minded discussions around topics that [were] current.”

“Liz Dolci, Heather [Murphy], a bunch of us were just talking and we said wouldn’t this be great for every student to be a part of. To not just get what they get in their classes, but also participate in these discussions and really see the broad scope of science,” Bent said. “Politics Club was our first-ever academic club and we said, ‘why not have a science club as an academic club as another pilot version? If other departments want to do academic clubs it’ll be great.’ So that’s why the SGA [Student Government Association] was involved, and why I was involved as a member of the SGA.”

Thus, the Serious About Science club was founded, and its title was coined by President Steven Lamonde. Soon after, the group developed from a series of conversations into an active academic club.

Lamonde, a senior at Johnson, was originally approached by members of the SGA, notably Bent and additional member Nasser Abdel-Fatah, with the interest of galvanizing different departments into forming as many academic clubs as possible.

Lamonde’s role as president is to moderate discussions, as well as to help organize and coordinate club events through their meetings along with Murphy.

As the club’s advisor, Dolci provides alternative solutions and support for their fundraising efforts and planning for experiments.

Although Dolci serves as an advisor and not a member, Vice President Murphy echoes the sentiment of her peers, who describe Dolci as an integral presence for the club and its functions.

“She’s great, she keeps us on track when she’s at [our] meeting and we’re trying to talk about seven different ideas at once, she really narrows us down,” says Murphy. “She’s fun because she thinks we’re all great, so it’s nice to have someone backing us that really believes that we’re a good club.”

The recent Environmental and Health Sciences department dinner on Jan. 26 brought faculty and students of various disciplines in science together for a night of food, trivia, and roundtable discussion to promote the club and department. The event brought 33 people together, faculty members and students combined.

“I was the emcee of the Environmental [and] Health Sciences department dinner; great success,” said an emphatic Lamonde. “Faculty loved it, students loved it, we had a 50-50 raffle, [and] we did a lot of fundraising through that. We prepared and played a game of Jeopardy. For each category [there] was a major within the department; the faculty said that they loved it, and that they had a wonderful time.”

According to Bent, the aforementioned Valentine’s Day card sale was successful in paying off the student and faculty dinner — successful enough to have funding left over to begin planning their first experiment, which will take place at some point later this month. “We’re hoping to have John Pellerin [professor of chemistry] come in and help us with the typical blow stuff up [experiments],” said Bent.

The club hopes to hold a dinner at the beginning of each semester to welcome new students and involve them with the faculty and other environmental and health science majors or minors.

The overarching theme for the members of Serious About Science is their message of unity within the scientific community.
As the club’s secretary, Cairns submits minutes from club meetings to the SGA. Cairns stresses the importance of that community aspect in her department for prospective science majors, and encourages those still undecided that science is far from impossible to pursue as an interest.

“We really want the incoming science majors to know that the science department is a community, and that we’re all here for you, the professors, the older students,” says Cairns. “We want people to realize that science isn’t as intimidating as a lot of people seem to think it is.”

While club funds are often limited, Murphy remains optimistic that they will meet their goals with enough hard work.

“We definitely would like to plan some trips. Because of the big dinner we hosted this semester, we won’t be able to go anywhere right now. Our funds are kind of limited from paying that back,” says Murphy. “We’ve thought about little trips like birdwatching with Steve [Lamonde], and things like that. I think one of our end goals is that we wanted to see Biodome in Montreal if possible, or get a VIP tour of the Natural History Museum, things like that.”

With enough financial flexibility and support, Serious About Science will have begun to put their plans for their first experiments in motion. These experiments, Bent hopes, will attract undecided students and science majors alike at Johnson State College, and consequently grow the club exponentially.

“Science is really fun … I think we’re a great group of people and we have some good discussions,” Bent says. “We are going to do fun experiments now that we’ve done some fundraising and have the money for that. If you are at all interested in the sciences, it’s absolutely a great venue that’s not super academic, but you’ll still learn something while having a really great time.”