Rolling a fat one 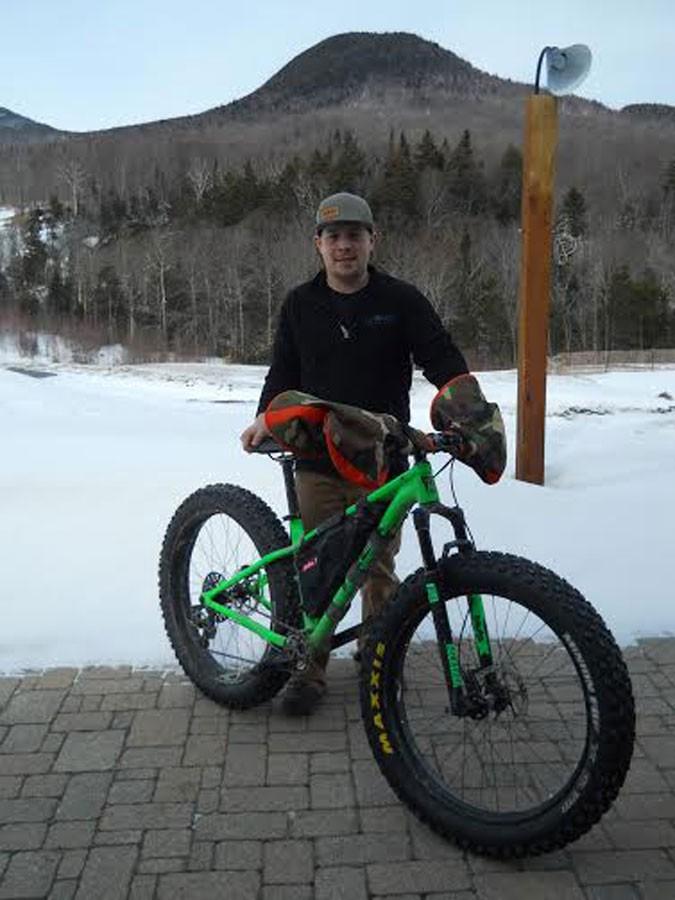 While this winter has provided less than ideal skiing conditions for Vermont, many cycling enthusiasts have had ideal conditions while rolling a fat one.

Fat biking is one of the newest forms of cycling in Vermont and the country. The geometry of the bikes are similar to a traditional basic cross country mountain bike, consisting of a rigid frame, with a wider wheelset to hold the roughly 5-inch wide tires. To further simplify it, just picture a mountain bike with fatter, bulkier tires.

Ethan Dull runs Jay Peak Resort’s Fat Bike Center, and he had his first fat bike experience in 2006 when the new sport was very young. Jeff Manning, owner of the Village Bike Shop in Derby, Vermont, noticed the increase in popularity of fat bikes in 2010, but says he wasn’t set on getting one for himself until 2012 when his friends all got one and he saw the significant demand in Vermont for the bikes.

After having a conversation about fat biking over a beer with a friend, Dull thought he could probably get a fleet of fat bikes for people to rent at Jay Peak. After working out a deal with the mountain to rent out a space, he was ready to go.

“Fat biking is more of a weather-proof activity, as opposed to skiing or snowboarding,” says Dull. “Right now the trails aren’t the best for cross country skiing due to the lack of snow this winter, but it’s been great for the fat bikes.”

Thomas Durivage is an avid mountain biker during the summer months, and had his first fat biking experience last winter. “It was really interesting how the bike handled, considering the bigger tires,” says Durivage. “The bike handled just like the hardtail trailbike that I ride during the summer, while gently floating on top of the groomed trails.”

Dull says that he has always enjoyed fat biking since his introduction to it. “It’s great to be able to get out a lot this year considering the lack of snow,” says Dull. “Being able to ride all year round has been really awesome.”

With this in mind, cyclists can stay in shape for whatever aspect of the sport they prefer most during the summer months. Whether it’s those long road or cross country mountain bike rides, riders now have the opportunity to roll on two wheels no matter the season.

This is Dull’s second winter season running the fat bike rentals out of Jay Peak’s Nordic Center. “Last year was a little slower than I had hoped for, but it’s great to see people get out there,” says Dull. “I think that this year has mainly been slow due to the lack of people visiting the resort considering the lack of snow.”

Even though business might not be the best, Manning noted that prior to the fat bike explosion in 2012 it was difficult for people to actually get the size frame that they wanted. “Many manufactures have since jumped into the fat bike game and from 2014 to present day many different bikes are available, and there is almost a flood of them in the market right now,” says Manning.

According to Manning, most fat bikers are people who already ride bicycles, and are willing to go out and spend that extra $1,000 to $3,000 on an additional ride. “The fat bike is still relatively difficult for me to sell in this rural area in the Northeast Kingdom,” says Manning. “It is a relatively expensive piece of equipment.”

Even with the expense of an additional bike for the winter, Durivage noted that he had no problem with purchasing a fat bike.

“We all have personal passions that we tend to spend a much more significant amount of money on than other passions we might have. Mine is mountain biking,” says Durivage. “If the idea of fat biking seems odd to people, they should simply go out and try it, and they will find that it easily parallels with any other aspect of riding.”

Manning says that Vermont can easily be considered a winter sports state: “Many people around here have been raised with something from snowshoeing to skiing.There are so many winter activities, and considering how this is still an emerging sport, many people find it difficult to fit it into their budgets considering what they have been doing their whole lives already. People ultimately had to pick which activity they want to focus their money on.”

Manning also noted that there are wannabe fat bikes on the market. “You can buy something at Walmart or online for much less money that will certainly have a similar look,” said Manning. “There is a high chance that the bikes will not have the same durability as a fat bike that’s sold at your local bike shop.”

Manning and Dull agree that fat biking offers new possibilities in riding. “We are seeing a lot of agencies embracing these bikes,” says Manning. “The state is starting to tell people that there is a good possibility that there will be shared use between state forest and national forest land between other recreational users including the snowmobile industry.”

Prior to fat biking, Manning noted that a lot of people had an experience where they took their bike out during the winter and ended up on the ground a lot.

“Now with the designs of the fat bike tires being able to float on top of terrain, it has opened up the winter for cycling,” says Manning. “The bikes are much more than just a winter bike because often times during the late fall or early spring when the trails get soft. Fat bikes will cause less trail damage by staying on top of the terrain better.”

Manning noted that when skiing is poor, fat biking is quite good. “I think we will see more and more of it being offered at ski areas like Jay Peak, as they have to offer more and more aside from skiing for business,” says Manning.

Considering once again that both Dull and Manning are the cycling enthusiasts they are, they agree that fat biking in Vermont only has room to grow. “The number of fat bike enthusiasts and bikes have been steadily increasing,” says Manning. “Many organizations have been working to make certain that they have fat bikes as a form of recreation.”

Dull noted that the Vermont Mountain Bike Association has gotten involved more with fat biking. The VMBA has recently added an entire winter riding resource page on their website.

Just like a daily snow report for any mountain resort, VMBA will give trail updates for every location in Vermont that offers recreational fat biking.

Along with VMBA’s involvement with fat biking, Dull mentioned that there are all kinds of fat bike events popping up all over the country. Vermont hosts a number of fat bike events like the Winter Bike Festival in East Burke at Kingdom Trails.

As far as the trails themselves go, fat bike trail crews across Vermont have taken many different approaches to maintaining their trail systems. Grooming methods range from some form of drag being towed behind quads, traditional Nordic trail groomers, to snowshoeing the trails with drags tied behind them.

Lastly, the ideal attire for fat biking can vary extensively. If you are doing a lot of ascending during your ride you will obviously be sweating. This is where it might be a good idea to carry a pack with a few different layers to put on, in case you have a fast and cold decent following your climb.

With the number of fat bikers on the rise in the state and more winter trail systems popping each winter, it is clear that fat biking is here to stay. For more information on fat biking and up-to-date trail conditions, you can visit VMBA’s website at vmba.org.