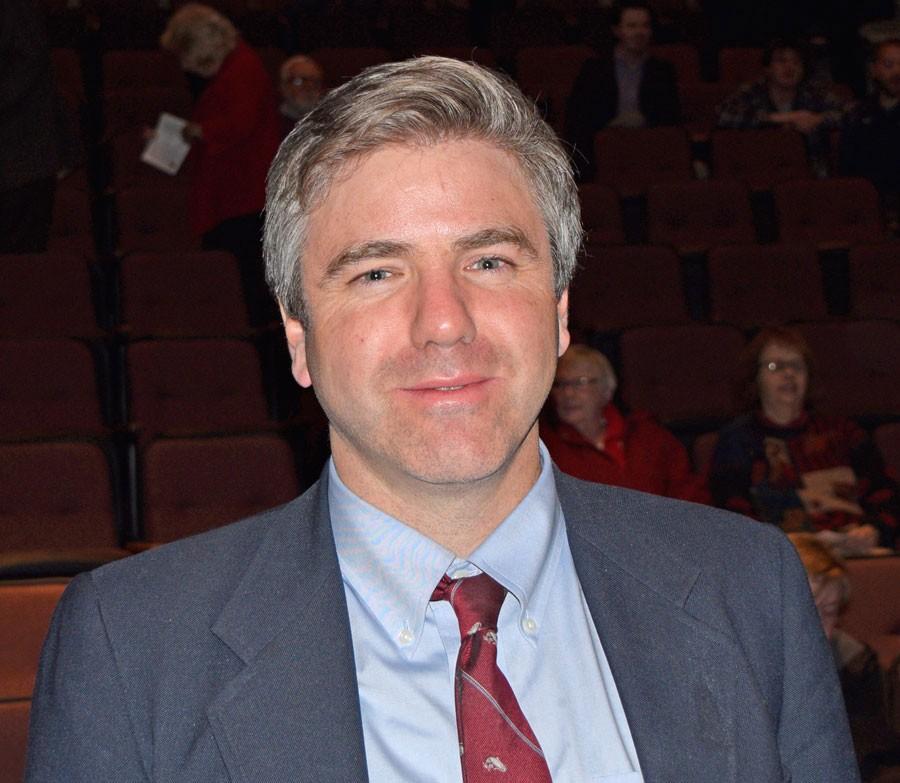 On Wednesday evening, March 23, in Bentley Hall, Room 207, Associate Professor at Vermont Law School Jared Carter stopped by Johnson State College for the 32nd annual Robert A. Ellsworth lecture, explaining the impacts of the newly developing policies between the United States of America and Cuba.

“Most people don’t know a lot about Cuba, or spend their time thinking about Cuban relations,” said Carter to a packed audience.

Carter’s lecture centered on providing context for the current state of affairs of U.S. and Cuban relations. Carter paraphrased the words of Thomas Jefferson to help describe the longstanding and very problematic attitude of the U.S. toward in Cuba; “President Jefferson said: ‘Cuba is an apple, and the Caribbean is the tree,’” he said. “And that apple is ready to fall into our laps. He’s saying Cuba is within our sphere of influence, he was saying [that] we rightfully own Cuba in many respects.”
Throughout his lecture, Carter implored his audience to consider the Cuban perspective rather than an American-centric perspective.

Following the Spanish-American War of 1898, the U.S. helped liberate Cuba from Spanish control; however, they did not “invite” the Cubans to their own declaration of independence in the signing of the Treaty of Paris on Dec. 10, 1898.

Carter also mentioned the lasting effects of the Platt Amendment, which was ratified June 12, 1901. He briefly explained the limitations placed on Cuban sovereignty through the amendment, which inhibited the ability of the country to devise treaties with other countries. The amendment also bound Cuba from full engagement in issues of foreign and commercial policy.

Also stated within the amendment was the designation of portions of Cuban land for U.S. military occupation, which allowed the existence of the infamous Guantanamo Bay Naval Base and military prison.
After some anecdotal discussion about the controversial naval base, Carter asked the audience to estimate the yearly cost to fund the site.

“The United States government, every single year in a perpetual lease, writes a check to the Cuban government for $4,080 for Guantanamo Bay Naval Base,” said Carter, placing the investment into context for the audience. “Imagine if Russia came in and said ‘we’re taking over all the coast and Chittenden County, and we’re going to write you a check for $4,080 a year.’ How do you think you’d feel?”
The naval base and prison, as Carter explained, is seen through the Cuban perspective as “an incursion on their sovereign territory.”

What ensued for both nations was the beginning of “tit-for-tat” policy, which developed over the following decades. For example, in response to the fining of several Cuban fisherman in Floridian waters, Prime Minister Fidel Castro cut water and electricity off from Guantanamo Bay on Feb. 6, 1964.
In retaliation, the U.S. government transported the largest desalination plant in the Western Hemisphere from California that same year to keep the base operating. To this day, the base remains isolated from the rest of Cuba.

Once again focusing on the Cuban perspective, Carter described the influence of prohibition and corporate interest in the U.S. being morally and economically detrimental to Cuba. “In Cuba, there was this perspective that ‘hey, we are essentially under the control of a foreign power,’ said Carter.

Throughout his lecture, Carter bounced around chronologically to describe the Cuban viewpoint. He explained the botched attacks of Castro’s revolutionary caravan on the military Moncada Barracks in Santiago de Cuba, following the annual celebration of Carnaval de Santiago de Cuba.

Castro helped devise the Agrarian Reform Law of 1959 to cultivate and nationalize unused farmland for sugar crop and stimulate a failing Cuban economy.

“There was very quickly a response from the Eisenhower administration,” said Carter of the beginning of the diplomatic standstill between the U.S. and Cuba.

“When Eisenhower said ‘we’re cutting 95 percent of the sugar quota that we’re buying,’” Carter continued, “the Cuban economy went into a virtual tailspin.”

This deterioration of sensible policy and mutual understanding between the two countries led to the passing of the trade embargo on Cuba through Congress, which would later be signed into place by President John F. Kennedy.

“Now, ultimately, what we see is an exodus of Cubans to the United States,” said Carter, leading into a discussion of the failed CIA-sponsored Bay of Pigs uprising from the Cuban exiles that lasted from April 17 to 19, 1961.

“Most of the exiles were captured and traded back to the U.S. government for baby formula and medicine,” Carter continued. “That was the birth of the Cuban embargo, and the relationship that we had.”

The Bay of Pigs invasion was followed by heightened tensions between the U.S. and Cuba. From Oct. 16 through 28, 1962, the Cuban Missile Crisis developed as Cuba sought the transport and placement of nuclear missiles from the Soviet Union to Cuban territory to dissuade the U.S. from continuous harassment.

The event ended as the U.S. agreed to secretly remove nuclear missiles from Italy and Turkey, while Cuba removed their own missiles. The crisis was pivotal in defining diplomatic relations between the U.S., Cuba, and the Soviet Union for the next several decades.

Carter described the embargo over the few decades following the Bay of Pigs invasion as an “ebb and flow.” At one point during Jimmy Carter’s presidency, the embargo had not been maintained and “disappeared,” only to be reinforced during Ronald Reagan’s terms.

Carter explained that relations with the U.S. and Cuba became tense after the Feb. 24, 1996 downing of aircraft belonging to non-profit activist group Brothers to the Rescue over Cuban territory, which killed four Americans.

One of the reactions, Carter said, was the swiftly instituted Helms-Burton Act of 1996, which strengthened regulations on the existing trade embargo, incentivizing Cuba to form a democratic-style government.

“Essentially, it took the power away from the president to end the embargo,” said Carter. “It made it statutory law passed by Congress. That’s why, in terms of U.S. and Cuban relations, the 90s was a low point.”

Carter, whose wife, Yuris, is native Cuban, described his own involvement in U.S. and Cuban relations during George W. Bush’s presidency as it related to family visiting.
“Bush adopted a policy that said that Cuban-Americans could not visit their family members in Cuba more than once every three years,” said Carter. “And you could only go for two weeks, and you couldn’t spend more than $50 a day.”

Placing the policy into context, Carter said the human impacts of the policy were tolling, on his own family and many others. Carter told one story of an Iraq War veteran who was restricted from visiting his dying mother in Cuba because of a trip he took two years prior.

President Barack Obama, however, eliminated restrictions on family visits to Cuba, and so progress was made to ease diplomatic relations between the two countries.

The timeliness of Carter’s lecture cannot be understated, following Obama’s recent visit to Cuba. He is the first sitting United States president to visit Cuba since Calvin Coolidge went in 1928 to negotiate sugar tariffs.

“Part of what makes these past couple of days so historic is what he’s come and done is poke holes in the embargo,” said Carter.

Carter reminded his audience that Obama cannot legally end the embargo, yet he described the avenues through which Obama has opened possibilities for commerce, business, trade, and travel.

“We [Carter and others] just got a license for the first brick and mortar job in Cuba since the 1950s,” said Carter, who is on the board of the Burlington, Vermont-based non-profit Cuban American Friendship Society. “There’s now opportunity to engage in brick and mortar business deals. We’re going to go down on May 1. We’re going to be repairing a large set of public tennis courts.”

One of Carter’s concerns with these newly developing policies is the growing interest of U.S. corporations imposed against the vibrant culture of Cuban society.

During his lecture, Carter embraced the Cuban perspective and fondly reminisced on his experiences in Cuba, which he does not want tainted by corporate interest from the U.S.

“Cuba is not my playground,” said Carter. “Just because I want it to be this disconnected place, that doesn’t mean that’s actually what Cubans want. The Cubans will need to decide their future.

“Only through having these individual interactions from a position of mutual respect and friendship are we going to solve these problems,” said Carter. “And that’s why I have hope for the future of Cuba, because for the first time in 60 years, [the U.S. is] coming at it with that perspective.”