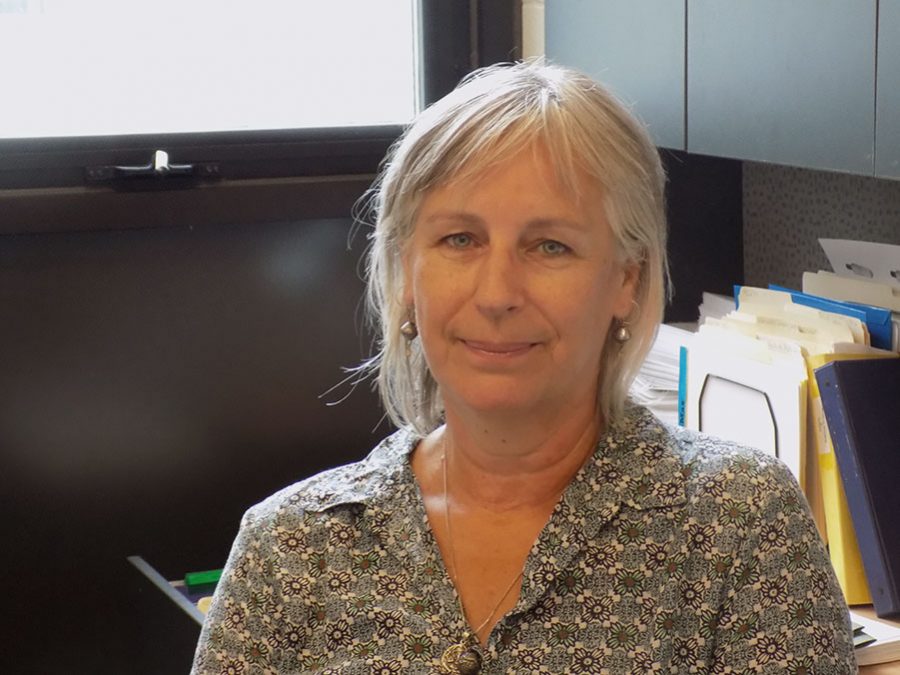 Shona Sladyk, a former administrative assistant to the academic dean at Johnson, has returned to the college after 15 years working at Sterling College in Craftsbury, Vt. and the University of Vermont College of Medicine in Burlington.
Sladyk’s new position at Johnson will be administrative assistant to the Environmental and Health Sciences (EHS) and Mathematics departments. She will be handling budgeting and ordering course materials and equipment.
“I came here in ’95 and started working with Vince Crockenberg [former Johnson academic dean] at that time,” said Sladyk. “I stayed here until 2001. From there, I moved on to Sterling College in Craftsbury, and I was there for five years as the president’s assistant. That was an interesting little place.”
Sladyk also worked full-time as the assistant to the associate dean of admissions at UVM before trekking back to Johnson State for a more concentrated part-time role. During her time away from Johnson, Sladyk also managed to beat breast cancer.
Five years ago, Sladyk’s full-circle journey caught some turbulence when she was diagnosed with stage one invasive ductal carcinoma (IDC). According to the National Breast Cancer Foundation, IDC forms in the breast milk ducts and can spread throughout the rest of the breast tissue and lymph nodes if left untreated.
Sladyk was treated at the UVM Medical Center while she continued working in admissions for the school. “When I was first diagnosed it was a very early stage cancer, it wasn’t really terrible,” said Sladyk. “But it was invasive and they wanted to be pretty proactive about treating it, so I signed up for the chemo and radiation. Around that same time the diagnosis and everything happens really quickly, so they’re right on it like, ‘Okay, we’re signing you up for chemo…’ and you have no time to think about anything. So I was just doing what I was told and pretty early on I realized that I needed to do something else to counteract the effects of the chemo.”
During her treatment, Sladyk understood that she needed an alternative route to heal from the constant low energy levels brought on by her treatment. “I actually changed my doctor and found a naturopathic doctor who was used to treating cancer patients. She’s in Burlington,” Sladyk said. “I also found an acupuncturist in Stowe, who I started seeing every week. She was also a Chinese herbal practitioner, so she gave me some Chinese herbal stuff as well. It was quite amazing because it kept my energy levels up. I was able to continue working throughout the treatment, taking one week off a month and working three weeks in between the treatments.”
“That got me interested in western medicine and alternative medicine,” Sladyk added. “I was quite surprised at UVM, where I was being treated at that time, I didn’t have any complementary medicine going on at all. They had no clue of what I was talking about.”
Sladyk attributes her success in defeating cancer to a willingness to stand up to the challenges that face her, such as IDC. “I think it’s just the way I am. It’s like, ‘Oh, here’s a challenge! I’m not going to let it get me down,’” said Sladyk. “It’s scary at first, but it’s been five years now, so I’ve officially graduated and am officially in remission. The hardest thing was telling my daughters, definitely. My oldest daughter had just graduated from UVM and she was planning on going off on an around-the-country road trip, which she put off for a year while I went through the treatment.”
Sladyk has come back to Johnson as a healthier person working for a familiar employer. Evaluating the lessons she learned from battling IDC, she maintains that keeping active in addition to meditation and painting more often has solved some other lifelong battles.
“I got through the treatment fine and just started looking after myself,” she said. “I was pretty healthy, but I had a problem with anxiety and depression for years and going through all this just kind of kicked me in the ass. I managed to get through all that realizing that a lot of it had to do with starting to exercise more.”
As for that new job, Sladyk is encouraged that many of her colleagues have remained at Johnson during her time spent away, bringing her comfort when she walks into her office in Bentley Hall.
“It’s been really nice, actually, because I don’t feel like I’m coming to a brand new job,” Sladyk says. “It’s nice to have autonomy. It feels like Bentley is my building.”