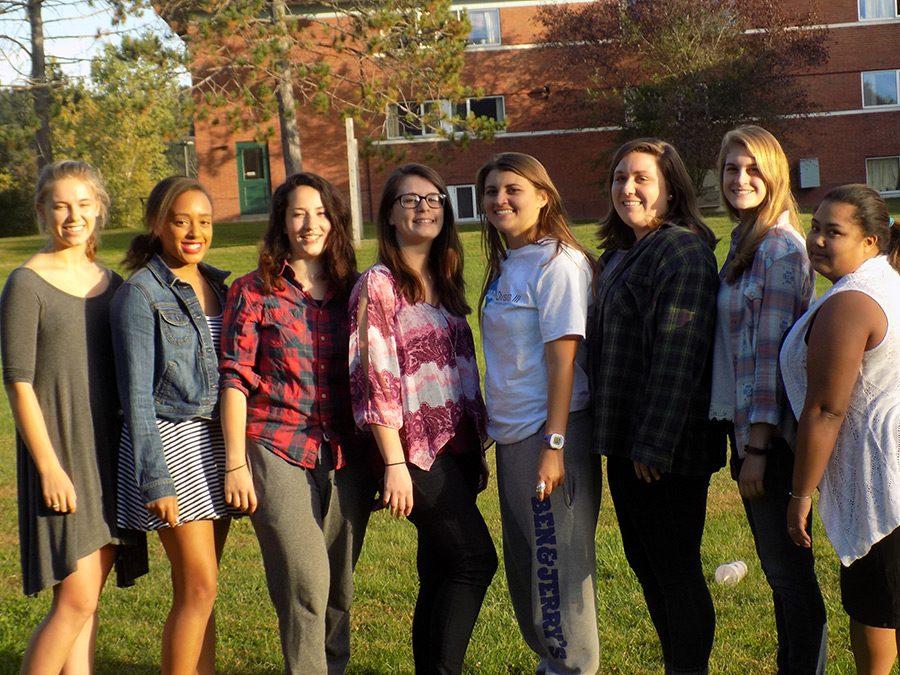 On Nov. 9, 1916, Montana’s Jeanette Rankin became the first woman ever elected to a seat in the U.S. House of Representatives. One hundred years later, the United States could elect its first female president and Vermont could elect its second female governor. Meanwhile, Johnson State’s current Student Government Association roster continues to work to reach and maintain gender equity and diversity throughout its own campus.

Whether it is coincidence or not, the SGA has gone from almost all-male representation in 2014 to currently having 10 of its 13 seats female-occupied. This includes an all-female executive branch.
Through this transition, the SGA sees the potential to inspire and empower current and prospective female leaders with such strong representation.

“In 2014, there was only one elected female to the senate or any executive positions, and she ended up resigning,” said SGA President Shavonna Bent. “Then Mary [Fafard], myself, treasurer Kim McDonald and Marina Turco all joined in various positions, one as a senator, which was exciting because we went from a male-dominated senate and cabinet to at least a more balanced executive branch.”
Bent, who was elected president earlier this year, acknowledges that JSC is ripe with female leaders but also recognizes the diversity on campus in other leadership roles.

“What I have noticed is there is a lot of leadership on campus in other places,” Bent said. “BAB [Badger Alternative Breaks] definitely has strong female leaders and role models. SERVE does as well, along with the presidential staff just by nature of having a more female-dominated campus. I’m not sure what our percentages are, but I know we have more females than males.”

According to the 2015 age and gender specific enrollment report released by the VSC, Johnson’s overall gender distribution sat approximately at a 70-30 split, with women being the dominant gender. Despite this disparity, Bent says there is equal opportunity for all who express interest in being involved with the SGA.

“As far as willingness to step up to the plate, I’ve never seen a female not step up because she feels like she can’t,” Bent continued. “What I have observed is that we have a lot of really dedicated leaders of both genders and people who don’t identify. We have a lot of leaders who say, ‘I’m too busy to do this.’ And that’s what I’ve seen on campus as far as unwillingness to step up. I think we do a really great job at Johnson of including leaders of all genders.”

Mary Fafard, who runs public relations and chairs Casino night, says such prominent female representation has a ripple effect on women who visit JSC and see this as the norm.

“This stands on campus and it also stands nationwide and statewide that the more women who are in leadership roles and the more women see them in those roles, the more likely they are to apply to run for elected positions themselves,” said Fafard. “I think that really happened two years ago when Shavonna was running for vice president — that’s when Kate [Abdel-Fatah] decided that she wanted to run to become a senator. I think when you see other females in powerful roles, that allows you to see yourself there as well.”

And though she admits to having some nervousness about joining the SGA, Fafard soon realized she had the support of her peers to take on a role of leadership at JSC.

Former SGA president Ben Simone, who interviewed Fafard in 2014, also understands the importance of having a more gender-diverse leadership model on campus for current, former and prospective JSC students.

Along with Simone, both Fafard and Bent are encouraged by the leadership model set by the SGA and JSC overall.

“I think it’s important that they see all that JSC has to offer,” said Bent. “Part of that is really balanced leadership that includes women and men, but I think you’re right, we do have a lot of strong female leadership. Especially with the interim deans this year in Sharon Twigg and Michele Whitmore.
“Just coming here, especially if you’re younger and you’re wondering what higher education looks like, is a great example of how we moved towards a more balanced and equitable distribution of genders,” Bent added.

Current SGA vice president Kate Abdel-Fatah did not plan on being a member of her current organization. However, she sees her recent ascension to vice president as an opportunity to help students have a voice at JSC.

“Honestly, being in this position, I feel like it is not what I am able to do for just females but what I can do for male, female and other on the JSC campus,” said Abdel-Fatah. “To me, it’s all about balance and having everyone know that their voices can be heard and that they are valid.

“I believe that female leadership is important, obviously, and I think JSC has some amazing women leaders,” Abdel-Fatah said. “But for young girls and boys, we should teach them to not look at the sex of the leader but what they can do.”

This year, the SGA hopes to host a “Women’s Week” to celebrate feminism and women in professional settings. Fafard hopes to accomplish this with some extra time to plan the events and bring in some high-profile guests.

“Last year we never got around to it — things happened, other projects come up, and it just fell to the back burner and we didn’t get it off the ground,” said Fafard. “This year, especially with a heavily female-dominated SGA and as history could be made in November, I think this is the year we should have a women’s week.

“We want to bring in female politicians, female business leaders from all over the state of Vermont,” Fafard continued. “I think that would bring to light that these women do exist, and that they are working every day and it’s not unusual to see women in leadership roles.”

Fafard, alongside her fellow SGA members, remains hopeful that JSC can add its own passage in the narrative that leadership is based on one’s merit and not their gender.

“When you see representation in high areas, you are encouraged to strive for your goals and to hold high positions as well,” added Fafard. “To see a female governor would encourage other young girls in this state to become the next governor. Seeing a female president would do the same, and seeing female SGA members does the same.”