One small step for JSC, one giant leap for the unified colleges 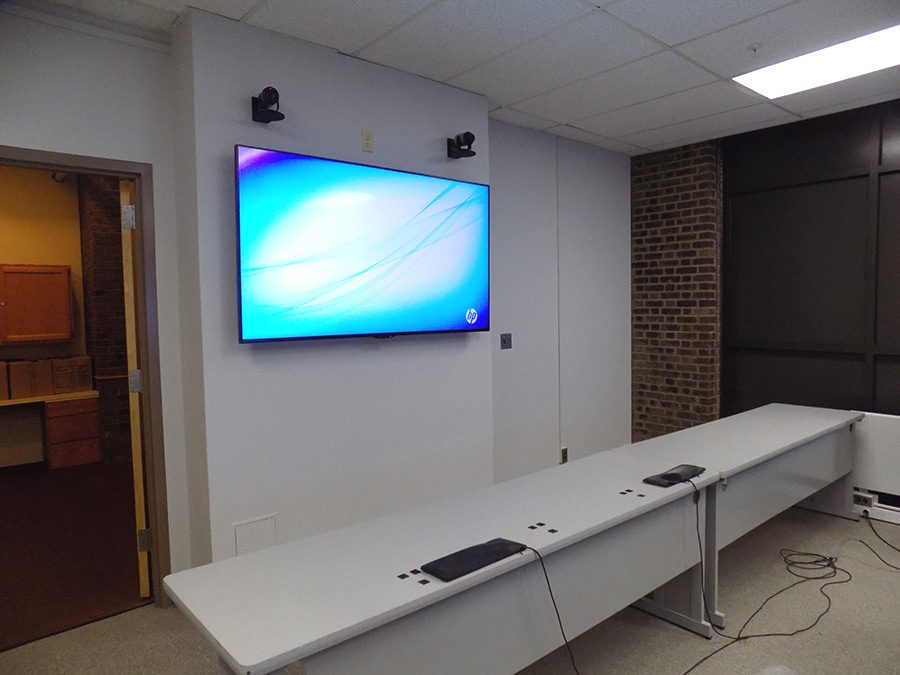 It’s a fact that student enrollment has been down for the VSC system over the past few years and public funding for higher education in Vermont is low. According to a study conducted by Vermont’s Higher Education Subcommittee, the VSC was appropriated $24.3 million to split between its five colleges in 2016. The decline in public funding for higher education since the 80s has contributed to tuition increases and lower enrollment numbers for traditional four-year students.

Utilizing the connected classroom technology was the only feasible way that longtime adjunct Tom Ware’s federal taxes course was going to fill his classroom this semester. When his class meets at JSC every other month in Bentley 211, his JSC students interact face-to-screen with their classmates from Lyndon via the visual communication software Vidyo, along with three video screens around the room.

“People are very interested and excited about all of this because it’s the future with this unification,” said Ware. “This class would not be happening at Lyndon because there’s only four students. And we [at JSC] started with nine students and we’re down to eight. This is one of the ways to get those classes to go.

“We tried to do federal taxes for ten years and never got enough students here at Johnson,” Ware added. “We finally ran this spring with the idea that it would be joined with Lyndon, and Lyndon fell through on their end. So I ran it with nine or ten students here. Twelve is enough, but neither eight or four would work at either school.”

Ware, who splits his time driving between the two campuses for his monthly class, says that, despite the logistical problems, the connected classroom is essential for students’ professional development.

“This is the future,” Ware said. “I think when you get out in the real world and you’re working, and you need to learn this stuff at work, people are going to be dispersed like this. You’re going to need to learn how to do online classes by yourself, how to do interactive conference-type stuff like this.”

Because this is a pilot course, there is some uncertainty among students and faculty as to whether or not either schools’ technological capabilities will be able to provide a smooth connection from class to class.

Business major Shannon McDuff acknowledges such technical issues this semester while being live streamed into another classroom 50 miles away.

“All our technology issues are pretty much revolving around [Vidyo],” McDuff said. “Ideally, when your professor is not on campus, you need to be able to see the other class, the professor talking on campus, and also what’s on his monitor.

“Not everyone in the class is a technology expert, so trying to arrange that through phone calls or just trying to work that out by semi-long distance [is difficult],” McDuff continued. “It’s interesting, because we won’t always have someone in the classroom that works in IT helping us out. They’re definitely made available now to us, which helped. IT in our last class was a huge help in getting everything set up.”

Like McDuff, JSC student Naomi Flemings says there have been some issues with this form of telepresence delivery, but says she is intrigued by the experience. “It’s a good experience, and it helps you learn more about other campuses,” said Flemings.

“We had some issues connecting once, but I think the experience of connecting to Lyndon itself is interesting,” she added, “because we can hold a class that probably wouldn’t be able to otherwise. We can actually see the students and see what they’re thinking and saying at the same time as we are.”

As part of the potential unification expenses, it is projected that $500,000 will be needed for future connected classroom courses and IT departments for both campuses, according to Chancellor Jeb Spaulding’s Sept. 26 “Report and Recommendations” document.

With connected classrooms becoming more viable among VSC schools, Jim Black, chair of JSC’s Business and Economics Department, said the technology is crucial to keeping classes from being cancelled on students.

“We have two classes scheduled in there for next semester,” said Black. “This is an economic necessity; the fact of the matter is that your tuition is as high as it needs to be and we need more money. Our classes are too small and what it ends up doing is cancelling these small classes for economic reasons, then you don’t get the robust education that we’d like to give you because we can’t offer you the class range.

“The thinking is that we can economize by combining this and using this technology resource in a way that students can get a better robust education,” said Black. “Our desire is that you don’t have to travel and that you could get it here, and Lyndon students can get it there. That’s our plan, and we just want to see where that goes.”

Black said the emphasis remains on the low-enrolled, upper-level courses that are most vulnerable to being dropped.

A way to help assure a quality connected classroom experience is to provide faculty with the same opportunities that students get to learn the telepresence technology, according to Associate Dean of Distance Education Bobbi Jo Carter.

“Typically the way I’ve seen these types of video conferences in classrooms be the most successful is when the faculty receive professional development training on the best way to interact with students via the video conferencing,” said Carter. “Because it’s a whole different experience than being in front of a traditional classroom. You have to teach people how to talk to the camera and how to make eye contact so that students on the other end feel engaged.”

In addition to providing training for faculty, Carter says that by having telepresence technology on campus up and running, newer courses can be considered.

“We have the video conferencing which allows us to offer things that we wouldn’t otherwise, simply because if a class isn’t filled, then we have to cancel it,” Carter said. “Whereas if you can pull in students from other institutions, then between all of those institutions you can fill up the class. That leads to foreign languages. Interestingly enough, we’re in conversations right now with the dean of academics, Sharon Twigg, regarding the possibility of being able to offer a distance Spanish course.

“This is because we don’t have the demand for it to be able to justify a full-time person here on campus,” she continued. “Finding an adjunct instructor in this area who can come in and teach it for us is a little bit difficult. But this technology allows us to go out to the world and find somebody who would be willing to deliver that course for us.”

If Professor Ware’s federal taxes class is successful with its trial run, then more VSC students like McDuff and Flemings will have access to classes that would otherwise be dropped because of low enrollment.

“I like the idea of it,” said McDuff. “They have a lot of work to do with it, but if this unification is going to happen, and they want it to be successful, then I think this is going to be a big part of that with these connected classes. I know that this class wouldn’t have been available to Lyndon students if it weren’t for the connected classrooms. I know it can be beneficial once they get it running. I hope they get it working and I hope they can figure out all the kinks.”

Moving forward, Professor Black says he is curious to hear from students inside and out of the connected classroom.