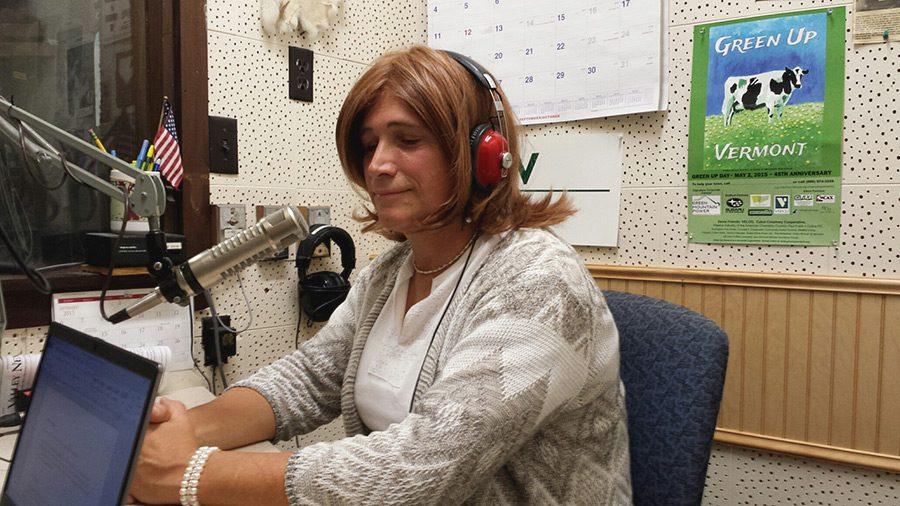 When Christine Hallquist stepped into her office at the Vermont Electric Cooperative in Johnson on Dec. 2, 2015, she felt several decades of gender dysphoria, insomnia and anxiety wither away.

She asserts, after a long struggle with gender dysphoria and anxiety, she’s happy to be a trans role model.

But before she went public with her transition, the president and chief executive officer worried that coming out as transgender to her business community would cost her the job she has occupied at the Co-Op since 2005.

Hallquist figured she would at least lose her national presence as a vice chair of the Strategies and Technical Advisory Committee for the National Rural Electric Cooperative Association, where she strategized new methods to enhance the efficiency of electrical grids and mitigate impacts of climate change in its affected communities.

“All this work [I’ve] done nationally – forget about it – my job was clearly my biggest fear; at that point, my family knew, my friends knew, my community knew, everybody around me knew except my business community.”

Despite her fears of losing everything, Hallquist decided “the truth was more important.”

For this installment, Basement Medicine will explore the relationship that transgender role models like Hallquist, alongside transgender students at JSC, have with the various forms of media in trans representation.

Earlier that year on a July weekend, Hallquist phoned her board of directors, afraid she’d be fired if she went public to her peers and in the media.

However, she was surprised at their response: “Every single one of my board members told me on the phone how much they appreciate and support me and that my gender change is not going to change their view at all of me.”

After going public, Hallquist said years of incessant panic attacks and sleepless nights subsided. “It turns out it was all related to my tension between being authentic and not being authentic,” she said.

Aware of her role as a spokesperson not only as president and CEO of a large Vermont utility, but a spokesperson for transgender and women’s rights, Hallquist says she’s committed to both her business and LGBTQ communities.

Like Hallquist, South Burlington resident and transgender male Marcus Pizer says he views himself as a resource for trans rights, despite his relative youth. “I just want to get out and fight for the others trans guys [and] trans women [and] bring attention to the issues we’re facing and continue to fight for our rights,” said Pizer, who was a keynote speaker at JSC’s 22nd annual Ally Dinner last April.

“I’m just doing the best I can to bring attention to the fact that our rights are basic human rights,” he reiterated.

Shane Wyman, an English and secondary education major at JSC and transgender male, says the increased visibility of transgender role models on social media have positively affected his own transition. “When I found out about my trans identity, there was somebody to look up to and learn about the process from,” Wyman said.

As Wyman advanced further into his transition, he found comfort seeing 25 year-old transgender activist and musician Skylar Kergil’s own transition process over his YouTube channel.

“It was helpful to have him there and to be in contact with him at some pretty weird points in my own life. It’s good to have that resource,” said Wyman, who lists Aydian Dowling, another prominent trans activist and entrepreneur, as another significant figure for his own aspirations.

Dowling, 28, was the first transgender man to be a cover model for Men’s Health Magazine and currently runs his own trans-focused clothing line, Point 5cc. 20 percent of the proceeds are funneled to his Point of Pride nonprofit foundation, which Wyman says is a boon to his own confidence as a health-conscious trans male.

“Just seeing that a trans guy can make all these accomplishments, like getting the cover of Men’s Health magazine and change the game for other trans guys to just be seen as regular men was incredible,” said Wyman.

Although Biology and secondary education major Blair Koonz says she doesn’t have many role models outside of trans actress and model Laverne Cox, she believes the trans community would still benefit from more positive representation in the media.

“I feel like having a role model and looking up to one specific person puts them on a pedestal and you can’t objectively look at stuff,” said Koonz, who someday hopes to be a positive, educated voice for her students.

“I don’t look at people, I look at actions,” she said. “Being there for students and helping shape them to become better people and just trying to be a positive figure in my future students’ lives.”

Today, much of the coverage of trans issues by mainstream broadcast networks feature varying schools of public opinion; however, Wyman says it’s liberal sources like MSNBC that represent trans issues more positive light. “They try and talk about the issue with Trump’s policies. But they’re also democratic and liberal, so they’re kind of biased to lean that way.”

Wyman praises national print publications like “Advocate,” an American LGBTQ-centered magazine, and the Boston Globe for their recent efforts to represent trans issues fairly and accurately.

Most recently, National Geographic’s January 2017 issue dedicated itself cover-to-cover to the exploration of gender on a worldwide forum. From the science to the social and legal pressures, the issue delves deeply into lives of transgender people everywhere from New York City, the Dominican Republic and Samoa.

“I’ve seen a lot of people’s perspective change just from reading that National Geographic issue” said Wyman. “Even my own grandparents didn’t understand it before they read the [issue], and when they read it they finally were able to understand what I was going through on a different level.”

“If people grow up to see themselves as characters who are doing things in media – it’s the same thing that happens with race and the binary, cisgender people in the media and mental illness representation – it’s all a big deal,” said Butt. “So having something to look up to, not just in a real person, but also in TV and representation in the media [is important].”

Although he’s conscious the awareness proliferated through television may have its backlash, Butt says when shows accurately represent transgender issues, the outcome is often positive.

While popular shows like Fox’ musical comedy “Glee” and CBS’ long running soap opera “The Bold and the Beautiful” feature prominent transgender characters, neither show features a transgender actor or actress. According to Koonz, this has been a persistent problem within popular TV shows.

“Any time you see trans people in fiction, it’s pretty much exclusively in badly portrayed stereotypes, or they’re dead; they’ve been murdered,” she said. “You never really see trans characters be developed outside of being trans – they don’t get happy endings.”

Beginning in 2002, a 10-year examination of popular TV shows and major broadcast networks by American non-governmental media monitoring organization GLAAD (Gay & Lesbian Alliance Against Defamation) deduced: from the trans characters from 102 “catalogued” episodes, 54 percent of the storylines had negative or offensive representation.

Transgender male Randy Raymond turns to social media and other trans people more frequently to avoid such misrepresentations. “Before I started hormones, that would really get to me,” said Raymond. “What I think helped was meeting more trans people in the community; seeing how they deal with their dysphoria and even reading more positive comments on a documentary on YouTube.”

Raymond says he’s noticed a positive shift with trans representation specifically throughout the social media over the last five years. “Even over the past five years, it’s gone from the stereotypical trans woman, who is thought of to be more of a drag queen, into a broader variety of trans people, trans males included,” said Raymond.

With no disrespect to the drag and crossdressing communities, Koonz says she despises the blurring of trans issues with drag culture and says such publicity has negatively affected trans visibility.

“A man in a dress; it’s a stupid stereotype,” said Koonz. “It’s part of the reason why I have issues with drag in the media – not its history – it’s important for trans people to help identify themselves. It continues to lead us to the idea of drag and trans as the same [without] understanding the actual difference.”

Koonz and Raymond both acknowledge the growing presence of trans issues within the media has started to affect discussions on public policy matters like last year’s controversial Public Facilities and Security Act passed March 23, 2016, by North Carolina’s legislature.

The law, better known HB2 (House Bill) or the “bathroom bill,” erased state ordinances which allowed trans people who have yet to legally or physically transition to use the bathroom that matches their gender identity.

Similarly, the Trump Administration’s rollback of federal protections for transgender people, issued by the Obama Administration, recently caused tension between transgender students and trans activists and the school districts by which they are affected, according to a Feb. 22 Washington Post article.

Pizer says trans issues regarding such policies are either avoided by media outlets or are badly misrepresented. “When the media stays silent on trans issues, they… further erase our struggles and lives,” he said. “But when they do, it’s so misrepresented to make us seem like predators [that it] make us feel like we’re different when we’re not.”

Conversely, Wyman says the recent controversies have brought more awareness to trans issues. Though, he acknowledges the coverage itself as “a flip of the coin” on the tone the press uses to represent such issues. “I’ve seen what looks like a lot more people coming together and being a lot more vocal about protecting trans rights,” said Wyman.

“There were just several marches across the country to protect trans rights, which I don’t think we would have seen 5-10 years ago, especially if it weren’t for media getting the word out about it.” Hallquist, who regularly attends UVM’s annual student-organized “Translating Identity Conference,” says she encourages trans and questioning students in Vermont not to fear their transition being public, despite any negative media representation.