Collins delivers an upbeat assessment in State of the College address 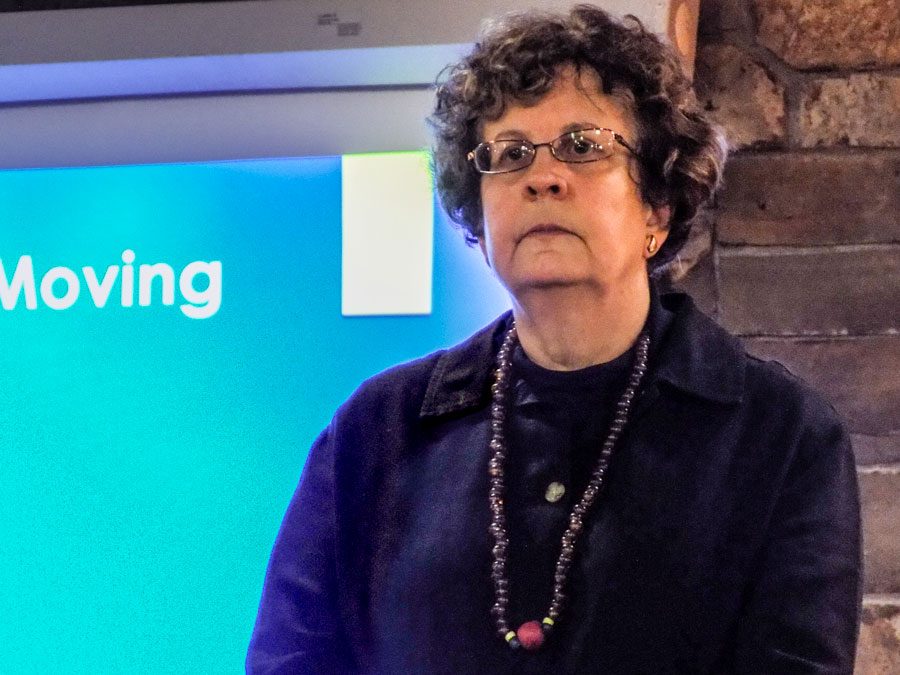 A boost in state funding for unification and VSCS base costs, a receding budget deficit and future enrollment and retention goals for Northern Vermont University (NVU) headlined JSC and LSC President Elaine Collins’ third annual State of the College Address on Monday, Nov. 6, in the Stearns Performance Space.

Fiscally, Collins lauded 2016 and 2017 as a “banner year,” highlighting the recent state appropriations that added $600,000 to JSC’s ongoing base appropriation and $1.6 million to support unification.

Out of the $1.6 million the colleges received from the state, Collins said JSC and LSC have “spent or encumbered” $910,686, leaving a remaining balance of $739,314. She reports that 45 percent of the remaining funds will be targeted for marketing and website work with another 13 percent covering technology, and the rest handling legal and miscellaneous costs.

The president also highlighted the $225,000 granted by the Davis Educational Fund to help fund the revision and redesigning of NVU’s core general education program that began this past summer.

Enrollment has seen its third year of steady increases from 1,538 in fall ’15 to 1,560 in fall ‘17, according to Collins, who notes that first-year student numbers have increased one percent over last year. JSC’s External Degree Program and Online programs also represented modest hikes in enrollment since the latter launched in last year, although the current number of 456 is expected to increase again when the next seven-week session begins.

Within these increases, numbers for underrepresented students have risen from 11.7 percent in 2015 to approximately 14 percent in 2017.

In the near future, Collins said NVU’s goal is to enroll 3,000 students between the JSC and LSC campuses by emphasizing the recruitment of graduate, transfer, adult, out-of-state and international students.

This uptick in enrollment is generating more revenue for the college, which, in turn, has diminished its budget deficit since 2015, according to Collins. The deficit, which has been balanced each year with reserves, has fallen 54 percent from $904,483 in the 2015-16 academic year to a projected $414,000 for this academic year.

“It does put us on track with where we expected to be with this unification,” said Collins. “We expect to have a balanced budget by fiscal year 2019 (FY2019).”

After an upswing in last year’s retention rate, the college saw this year’s rate fall to 64 percent from just under 70 percent for the 2016-17 academic year, according to Collins.

Collins also reported that JSC’s average GPA has seen an increase from 84.89 in 2015 to 85.22 in 2017, something Collins said is being observed for a possible link to monitor the college’s difficulties with retention. “So given this, it’s going to be very important as we continue to see if there’s a correlation between higher rates of academic standing and first-year retention rates,” she said.

“We’re hypothesizing that there will be this correlation,” said Collins. “But if we do not see any relationship there, we may need to focus on other causes of attrition, such as financial, social and programmatic causes, among others.”

The president highlighted recent accomplishments such as Ologie’s (Ohio-based marketing firm) development and launch of NVU’s “Do North” brand and anthem video in the past two months. She also recognized California-based web development agency KWall for creating NVU’s initial microsite and full website.

“We’ve spent a great deal of our energy thus far focusing on our brand and the northern mystique,” said Collins. “We hope that our successful branding campaign will attract students who may not have thought of attending a Vermont State College. But always keep in mind that the degree to which we’re able to live and breathe this brand will be the reason that they stay.”

Among the unification items Collins emphasized, the New England Association of Schools and Colleges’ (NEASC) approval of JSC’s and LSC’s substantive change proposal—written by former JSC Academic Dean Dan Regan—garnered round of applause for NVU’s transition team members in the audience.

“This has been a huge labor of love on the part of the team and by Dan [Regan],” said Collins. In 2019, she noted that the campus will prepare for a visit of a two-person team to check on the progress of the unification initiatives, including governance, academic planning and evaluation, and enrollment and budget. A more comprehensive visit from NEASC will occur in 2023.

Both colleges have saved an estimated $973,591 from the consolidation of its administrations and by making adjustments to retirement to allocate for other expenses. When factored in with savings from non-personnel adjustments, such as print and publication savings and information technology savings, that figure is an estimated $1,100,000, said Collins.

During a time in academia where fewer traditional students exist and competition is fiercer among colleges to attract from that diminished pool, Collins said any increases in savings, appropriations, retention and enrollment and national visibility will prove vital to NVU’s long-term health.

“But in spite of these challenges, it’s my belief that the best days of Johnson State College are yet to come,” she said, pointing to the creativity and innovation of its programs, such as its new fine woodworking and furniture program, as two guiding principles NVU will need to distinguish itself from competitors.

She also highlighted the ongoing strategic plan which identified priorities such as economic viability, student retention, innovative pedagogy, global awareness and diversity and inclusion to help embolden and, again, distinguish NVU from other institutions.

Before concluding her presentation, Collins reiterated that the task of improving retention rates falls on everyone at JSC and LSC.

“We need to be more intentional about understanding which of our retention strategies are having an impact,” said Collins. “…I should also add that everyone on this campus, every single person here needs to be involved in ensuring that we’re able to achieve the highest retention rates possible. We have to improve this area. We have to.”

After her presentation, President Collins fielded questions and concerns from staff and faculty.