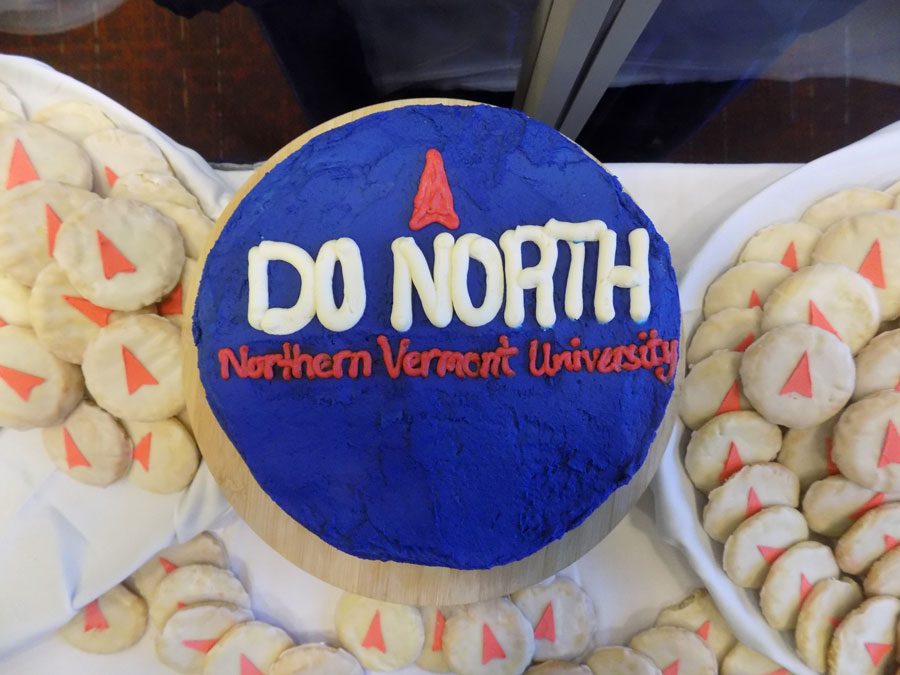 “Although today we are branding a new university, this day comes within a context of change that has followed our two colleges across the historical road to unification,” said NVU President Elaine Collins in her opening remarks of NVU’s brand launch celebration last week in Bentley 207.

NVU’s “Do North” brand was publicly debuted via email and a physical viewbook by JSC Web and Digital Communications Manager Melissa Weinstein and LSC Executive Director of Communications Sylvia Plumb.

The celebration, which was attended by JSC students, faculty, college administration and Vermont state legislators, connected the histories, personalities and commonalities of the JSC and LSC campuses while keeping an eye on NVU’s future.

The two reimagined mascot costumes — a hornet and a badger — danced around before the ceremony, high fiving audience members and representing both campuses’ athletic programs.

Collins’ speech highlighted several new initiatives, including an exclusive viewing of NVU’s new anthem video, and reflected on accomplishments that she said JSC and LSC will look to build upon as a single university.

Among the new initiatives she acknowledged was NVU’s new general education core curriculum and strategic plan slated for the university’s inaugural fall ’18 semester, and LSC’s creation of a multi-disciplinary climate change science degree. “This degree is likely to be the only one of its kind in the country,” she said.

Collins extended the guiding question, “How can I make an impact in the world?” for NVU’s curriculum to NVU’s overall purpose of readying students for their respective careers and the world.

“This is just the beginning,” Collins said in her final remarks with the acknowledgment of the work still needed to be completed. “Keep in mind always that the greater our quality, the stronger our contributions can be to the northern tier. We had an amazing run since 1828 [JSC’s founding year]. Let’s join together in the way that we have demonstrated across time to ensure that the best years for our two colleges are yet to come.”

A YouTube link to the video was released last Thursday via email to the entire JSC and LSC community.
Sporting LSC’s hornet mascot costume, Senator and Pro Tempore of JSC’s Student Government Association Dana Prouty spoke of her experience learning about unification. “When I first heard of the unification, I thought, ‘What does this mean for me? How will this affect my education?’” she asked.
“Since then, I’ve been lucky enough to do things such as perform with the talented musicians in Lyndon’s jazz ensemble at the State House last year and listened to Baratunde Thurston [author of “How to Be Black”] talk on Dibden stage alongside my soon-to-be classmates — and be a hornet for a day,” said Prouty.

After the formal celebration, mingling attendants were provided refreshments such as hot cider, glazed cookies and a round blue “Do North” cake. Earlier that day, Lyndon held a similar celebration with a cake featuring NVU’s official new logo, according to Collins.