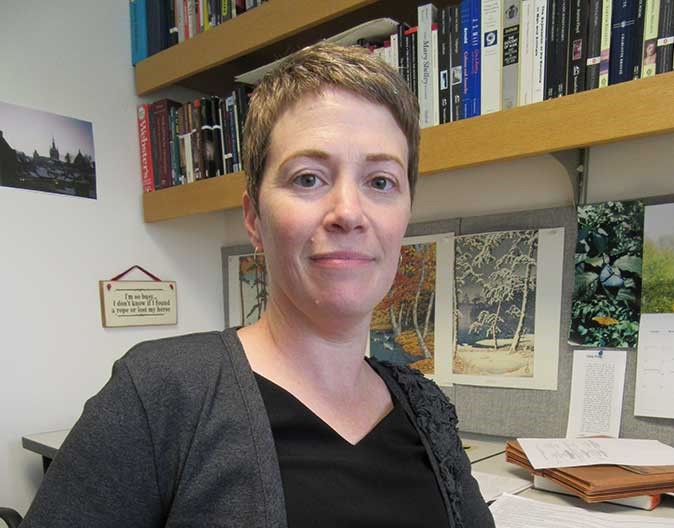 JSC’s Faculty Assembly voted unanimously to approve Northern Vermont University’s (NVU) revised general education Core Curriculum on Nov. 14, with the stipulation that the proposed capstone course be removed, and, that students be required to take either a climate change, sustainability or social justice-enriched course. In addition, the Faculty Assembly will consider any amendments that might be proposed by LSC faculty.

JSC Professor of Education Dr. Rob Schulze, a member of the eight-person Core Team, led the discussion while JSC Associate Professor of Writing and Literature, Associate Academic Dean and gen-ed team chair Sharon Twigg led LSC’s faculty meeting on what a final draft of the Core Curriculum would envision.

The original model, which was approved in October by JSC’s Faculty Assembly, had been to require a first-year seminar, a core capstone course and a climate change and sustainability-enriched course based on four specific learning goals and their outcomes: academic skills, intellectual curiosity and flexibility, individual and social responsibility, and intercultural and global awareness.

According to Twigg, LSC’s faculty “seemed generally supportive of the proposal,” but had questions regarding the assessment of the first-year seminar, which does not currently run at LSC.

Based on feedback from faculty, however, Schulze said faculty have agreed that first-year seminars are “not up for debate” on whether it would be removed from the core. Overall, he said that faculty felt three requirements were “too many” to move forward with.

Schulze also noted that the function of losing the capstone would be to focus on giving students more choice with their enriched courses and faculty time to work on developing such courses.

“Each of those would have different criteria and a student would have to choose one,” said Schulze. “They could take multiple of those, but they would be required to take one of those three. That’s what’s been out there in terms of making it broader and giving more faculty a chance to be part of that component of the gen-ed.”

JSC Professor of Psychology Dr. Gina Mireault endorsed the idea of providing more choice for students, pointing to the added flexibility it would create in their schedules. “I think… that that model allows faculty and students the most flexibility,” she said. “If students can choose one of those three and they don’t have to try to cram three of those into their gen-ed, that’s best I think for them.”

For JSC Professor of Fine Arts Ken Leslie, freeing up the enriched courses to occupy three different categories which students could choose from for a requirement avoids the cumbersome nature of previous gen-ed requirements.

“We’ve all experienced certain categories of gen-ed requirements like civic perspectives or something like that where there are just no choices put forward,” said Leslie. “We don’t want to walk down that path again where we create a requirement that can’t be fulfilled easily because there’s not enough of us to create courses that match.

“The more we make it possible to actually meet what we’re trying to do, the more likely it is to fly,” he said. “I think that was the big problem I had with the current rule was this was going to be another one of those things which doesn’t have any options for the students when we’re actually signing them up for classes.”

Twigg says LSC’s Faculty Assembly is scheduled to vote on December 12 to approve or deny the proposed Core, and, to propose any amendments to the current proposal.