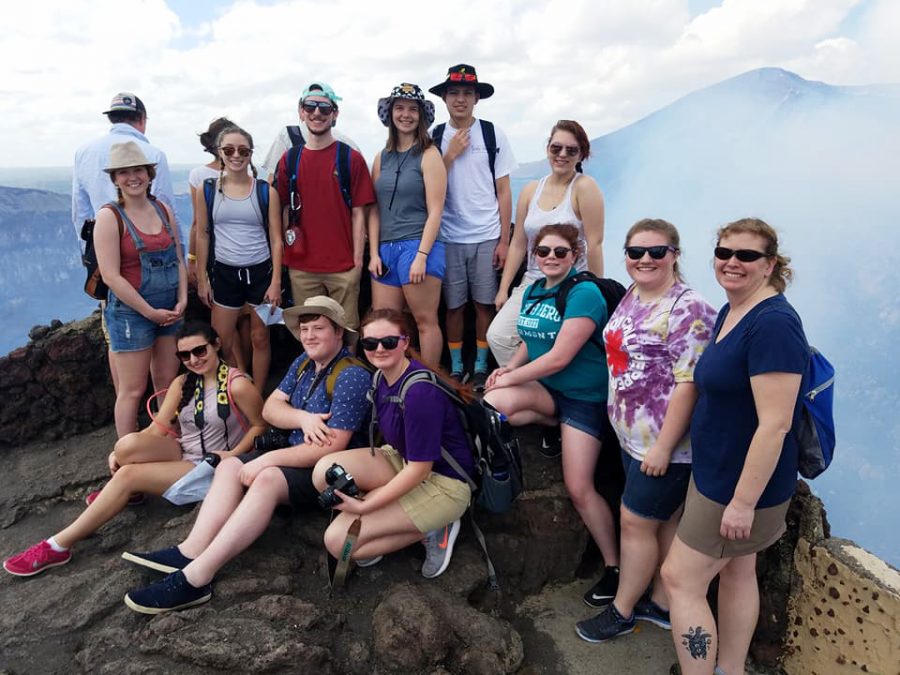 Over February break, a group of 12 volunteers from the Badger Alternative Breaks service experience program at Johnson State College traveled to Nicaragua to commit their time to sustainable service work in the small village of Managua. There, they worked alongside the local community to work directly with local school children at the Monte Tabor school.

The social issue focus for this BAB experience was education. Since last semester, JSC senior Rebecca Bingham and JSC junior Joseph Smith, student leaders for this BAB experience, organized, facilitated and led educational group meetings once a week. These meetings enabled participants to further delve into and progressively learn about topics and issues surrounding education throughout the world, particularly within Nicaragua and the community of Managua.

These topics included limited access to education, lack of sufficient school funding for educational programs and school supplies, the importance of sustainable education programs, and the issue of families who are unable to afford to send their children to school.

The BAB education group worked through an organization called Panorama Service Expeditions, which is a nonprofit organization focused on grassroots sustainable social and economic development projects. BAB is a program that is strongly focused on participating in sustainable service work so as to leave a lasting impact and meaningful connections with the communities each group works with.

“This is a huge concept that our group tried to comprehend. We realized that for many of these students, we were simply passersby. Panorama hosts many other alternative breaks and thus many of the connections students would make on these experiences wouldn’t be long lasting,” said Smith. “However, we have learned of many opportunities that students and alternative breakers can [use to] stay in communication. One way is through a pen-pal program and the other by providing a student with a scholarship to attend Monte Tabor, which covers full tuition for a year.”

Each morning on site in the village of Monte Tabor, the BAB group was split into three small groups and each assigned a different task. One group would work on deconstructing old buildings and building a new classroom for the school. Another group would work on beautification projects for the property, painting the walls, buildings and gates at the school. The third group assisted in teaching and working with the school children in an English classroom during school hours, as well as working in the after-school program once school hours concluded. Work would start at 8 a.m. and end at 12 p.m., with a break for a lunch of rice and beans from 12 p.m. to 1 p.m.

“Painting helped with aesthetic and overall pride in the school,” said Andie Flavel, a participant in the education experience group. “Working with the children on English in their programs gave them a hands-on experience with hearing native English speakers pronounce words the kids were reading and trying to learn in their classroom.”

“The after school program gave the kids an outlet,” said Flavel. “They were able to stay and play sports with their friends or color, and play other games with BAB participants instead of having to go home or to work, or whatever their regular routine would normally be.”

“This was also a time where the kids would come to engage in after school activities,” said Smith. “These kids loved football, baseball, basketball — anything that involves a ball that you can kick or hit.”

Monte Tabor is a small school, featuring two white-roofed, blue-sided buildings surrounded by a playground containing two soccer goals. In between the two schoolhouses is a school garden featuring a variety of local plants, trees, fruits and vegetables, including fruiting avocado trees and bamboo plants.

Being a tropical country close to the equator, the weather in Nicaragua is typically hot and humid. The village of Monte Tabor is comprised of a variety of homes along the steep hillsides, with most made up of walls made of stone or brick with tin roofs and dirt floors. Wild chickens and friendly stray dogs wander the dirt roads and pathways around the village.

Smith, an art and education major, recalls one of the most memorable experiences on the trip for him was when he and another participant, while working on a painting project outside one of the classrooms, noticed through the classroom window that there was no teacher present in a classroom full of rambunctious students.

“We were nervous at first, but we both were driven to the fact that it could potentially be a great opportunity,” said Smith, an art and education major. “It was, wholeheartedly, one of the best.”

Speaking with the children, they discovered that their teacher was out sick and could not teach them their geography lesson that day. With the help of their on-site translator, Smith and his fellow BAB participant ended up teaching an impromptu United States geography lesson for the class.

“I had been struggling to find the spark that drove me to education in the first place, and that moment really gave me that back,” said Smith. “Those were moments that I was hoping to gain on my journey in the field and I just so happened to find it 4,000 miles away.”

While the education group was only within the Managua community for a week, the BAB group’s efforts to leave a positive and sustainable impact with the children and people they worked with was an incredibly important goal of the experience for the group.

“We know that it was impactful to see progress and beauty uplift the students, but for the community to be labeled fully ‘sustainable,’ we needed to see the members themselves take on projects that would spark a change,” said Smith.