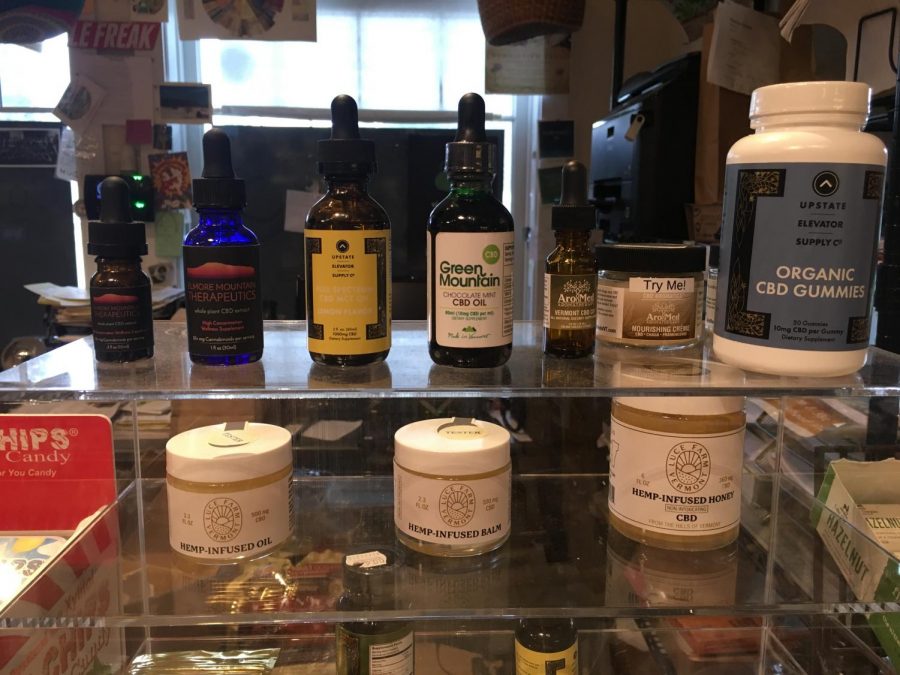 Story and photo by Phil O'Neil

While some Vermonters are gearing up for the legalization of recreational marijuana use that kicks into effect on July 1, others may have already noticed a sharp increase in the number of “green” products around the state.

Cannabidiol, or CBD, products have been legal in Vermont since 2013 when then-Gov. Peter Shumlin signed Senate bill S.157 into law. The bill legalized cultivation of industrial hemp and, by proxy, its extract: CBD.

Hemp differs from marijuana in one major way: the presence of THC (tetrahydrocannabinol). THC is the component of marijuana that’s psychoactive or, in laymen’s terms, the part that gets you high. Federal classification dictates that the plant must contain less than 0.3 percent THC to qualify as “hemp.”

Industrial hemp has a myriad of uses beyond consumption, as is evidenced in the “Findings” text of S.157.

Hemp and CBD were even made legal on a federal level in 2014 with the passing of the Agricultural Act, also known as the Farm Bill.

There are limited numbers of CBD-specific stores in Vermont, like Burlington-based Ceres Natural Remedies, but Vermont-made CBD products can be found in smaller grocery stores, coffee shops, restaurants and bars all over the state.

Waterbury’s Zenbarn is one such restaurant. Over the winter, owners Ari and Noah Fishman paired up with Vermont Cannabis Brands to host a weekly “CBD Night” where guests could sample and purchase products, speak with cannabis experts and try CBD infused drinks.

Zenbarn even hosted a “Hemp + Hops Dinner” in December, offering a five course prix fixe meal and beer pairing where every course was infused with CBD.

“The meal was a great way to showcase CBD in a more mainstream setting,” Zenbarn’s Head Chef Mike Giffune said in an interview with Seven Days following the dinner. “Even if everybody’s not going to go make a six-course dinner with CBD, it provides sort of a stage to let people know that it’s actually a thing. It definitely has real-world benefits.”

Neither the FDA nor the CDC have acknowledged the medicinal benefits of CBD and, as such, cultivators and vendors are barred from making such claims, although many will attest that they have personally seen the positive effects of using CBD.

“Selling these unapproved products with unsubstantiated claims is not only a violation of the Federal Food, Drug and Cosmetic Act, but also can put patients at risk as these products have not been proven to be safe or effective,” the FDA said in a released statement.

CBD is said to have a calming effect on the body and helps to alleviate pain, anxiety, inflammation and seizures. Both CBD and THC interact with the endocannabinoid system, which is a regulatory system in the human body that operates via enzymes and cell receptor sites.

According to research by the National Cancer Institute, when the body’s functions deviate from homeostasis, the endocannabinoid system responds by controlling the number of communicating cells that are sent, ultimately affecting the duration and intensity of certain physiological processes.

CBD and THC are the most common of approximately 100 cannabinoids found in the cannabis plant genus that interact with the endocannabinoid system affecting pain, appetite, mood, memory, immune response, sleep and cellular cycles of life and death.

The endocannabinoid system is also responsible for what’s known as the “runner’s high.” A study titled “Physical Activity and the Endocannabinoid System: An Overview” states that after 45 minutes of moderate physical activity, there are noticeably increased levels of the neurotransmitter anandamide present in brain plasma and membranes.

CBD has a similar structure to anandamide and both bind with and fit inside the brain’s receptors, creating the euphoric feeling humans feel after vigorous physical activity.

Director of the National Institute of Drug Abuse Dr. Nora Volkow testified before Congress in 2015 in an effort to increase research about CBD and its potential uses.

“There is significant preliminary research supporting the potential therapeutic value of CBD,” Volkow said. “While it is not yet sufficient to support drug approval, it highlights the need for rigorous clinical research in this area.”

The World Health Organization issued a statement in December saying that an initial review showed that CBD is unlikely to be abused or foster dependence on other cannabinoids like THC. The organization is undergoing a more thorough investigation of CBD this month.

Despite the FDA’s reservations about the use of CBD for medicinal reasons, the word is out in Vermont.

Alejandro Bergad is co-founder of Green Mountain CBD in Hardwick, which is one of the largest producer/suppliers in Vermont. According to Bergad, his company sells CBD products in 100 stores across Vermont and to all 50 states online.

Elmore Mountain Therapeutics is another locally based CBD company that’s on the rise. Ashley Reynolds started the company with her husband and quickly partnered with other woman-owned businesses Laughing Moon Chocolates, PK Coffee and Nutty Steph’s Vermont Granola to offer a wider range of products.

Reynolds’ products can be found in stores all over Vermont and New York such as Healthy Living, the RehabGYM, City Market, Hunger Mountain Co-op, Commodities Natural Market, the Elmore Store, the Morrisville Co-op, Sunflower Natural Foods and many more.

Since hemp cultivation was made legal in 2013, the number of registered cultivators has gone from just eight in the first year to 29 in 2016 and 87 in 2017. With permits only costing $25 annually, some dairy farms like the Quarry Road Farm in Middlebury are considering selling their herd to move to a more cost-efficient, manageable CBD operation.

“We’re looking for a future,” said Sam Berthiaume, a partner at the Quarry Hill Farm. “There’s no money in cows.”

Only time will tell if the CBD bubble in Vermont will pop or if it will continue to proliferate in the same manner. A wide range of CBD products continue to explode onto the market, like deodorant, lip balm, massage oil, salves, teas and beer.

CBD’s non-psychoactive profile makes it a viable, worry-free remedy for children and pets as well. It can relieve many of the same ailments for four-legged friends as for people, including joint pain, inflammation, skin problems, seizures and bowel issues.

For parents seeking more natural remedies to their children’s afflictions, CBD has been a blessing. Although the FDA hasn’t completely come around on CBD, it unanimously voted last month to approve a drug called Epidiolex. This is the first cannabidiol-based prescription drug to be approved and recommended by the FDA for its effective treatment of medicine-resistant epilepsy.

Until the FDA catches up, there are plenty of real-life testimonies about “CBD miracles” circulating the Internet.

One such story comes from Melissa Hilt of Albany, New York. She says that her 10-year-old daughter Haley was seizing more than 100 times a day. They tried surgery, alternative diets and 15 different medications over the course of time. The Hilts then tried giving Haley a dose of CBD oil once at breakfast and again at dinner every day. Hilt reported that the seizures virtually stopped and that she “finally got to meet her real daughter.”

Powerful testimonies like this are part of the reason CBD has been on the rise the way that it has, but here in Vermont it seems like more and more people have their own stories of how it helped them.

Starting in July, Vermont residents will be able to enjoy marijuana for whatever reasons they see fit, but until then they can enjoy the therapeutic benefits — perceived or real — of CBD.