No nudes is good nudes? 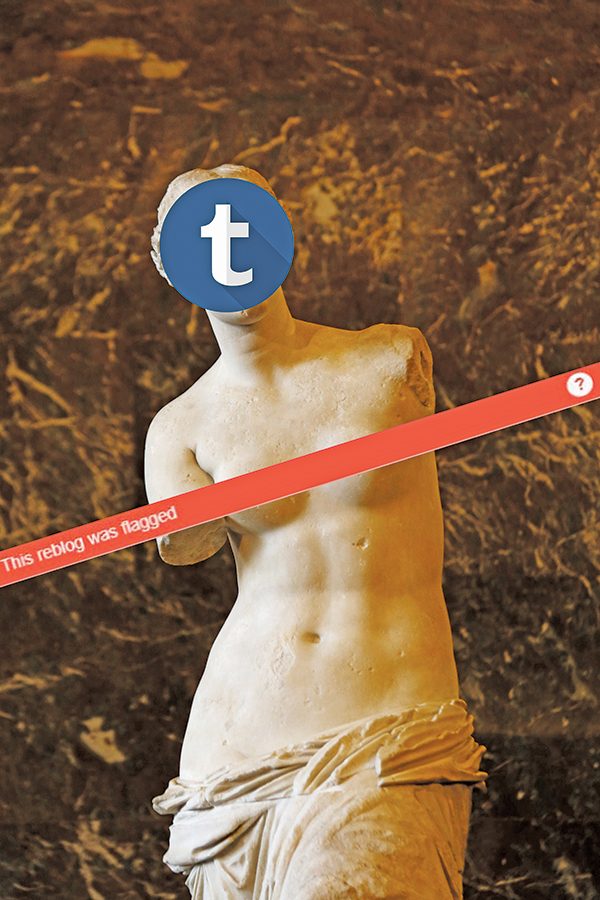 Social media site Tumblr caused immense controversy with its user base on Dec 3. by announcing a new no not-safe-for-work content policy after its mobile application got removed from the Apple App Store.

This change to the community guidelines is to go into effect Dec 17. This ban on adult content focuses on images of sex acts and genitalia, including “female-presenting nipples,” whatever that means. This ban is not supposed to apply towards artistic nudity, or written erotica.

“As Tumblr continues to grow and evolve, and our understanding of our impact on our world becomes clearer, we have a responsibility to consider that impact across different age groups, demographics, cultures, and mindsets,” wrote Jeff D’Onofrio, Tumblr’s CEO, in a message to the user base. “We spent considerable time weighing the pros and cons of expression in the community that includes adult content. In doing so, it became clear that without this content we have the opportunity to create a place where more people feel comfortable expressing themselves.”

The filtering system Tumblr implemented to sift out adult content with this announcement was flawed. Almost immediately, innocent images were flagged, meaning they wouldn’t show up on the original poster’s blog and wouldn’t show up in search results. These falsely flagged images included an image of a baby covered in peanut butter, a screenshot from a Mario game, classic paintings and sculptures such as The Statue of David, and photos of German shepherds.

Users quickly discovered that if an image had a pixel of skin-tone, it was going to get flagged as adult content. When it got unflagged, it would show up out of order on user’s blogs. There was a 24-hour period where certain terms couldn’t be searched for, even if they didn’t immediately relate to adult content. Ana Amari, a character in the game “Overwatch” disappeared from search results because ‘ana’ was used as shorthand for anorexia posts. Users who have chronic pain could no longer access resources other users with chronic pain uploaded because the word pain was filtered as sensitive.

As soon as the news spread on the site, users started making memes of the event, organizing protests, and started backing up their blogs with the native Tumblr tool. Even blogs that had never posted any adult content began worrying about their future on the site. Bloggers posted alternative social media sites to follow them at, leading to a mass migration to Twitter, Archiveofourown, Pixlr, and other smaller sites as users scrambled to follow the communities they’ve built.

Other issues with Tumblr arose after users noticed that while tags related to adult content had been entirely banned, tags with direct ties to nazism and white supremacy hadn’t been throttled. Tumblr staff has since wiped these tags and banned most users that published to them.

Rivals of Tumblr, such as start-up Pillowfort, were quick to notice the backlash of this decision and offered users sanctuary. Pillowfort’s servers were overloading with high amounts of traffic hours after coming back online from security maintenance on Dec. 4.

Still, while it seems like there is a mass exodus, many other users stay, reluctant to leave the site where they have spent hours finding new interests, laughing at memes, and sharing cat gifs.

“I was there when the triple fandom took over every post. I’m not leaving now. I have an eighty day long queue, I’m going to be there for at least another eighty days,” Marston said.