Leaks continue to plague WLLC after more than 23 years 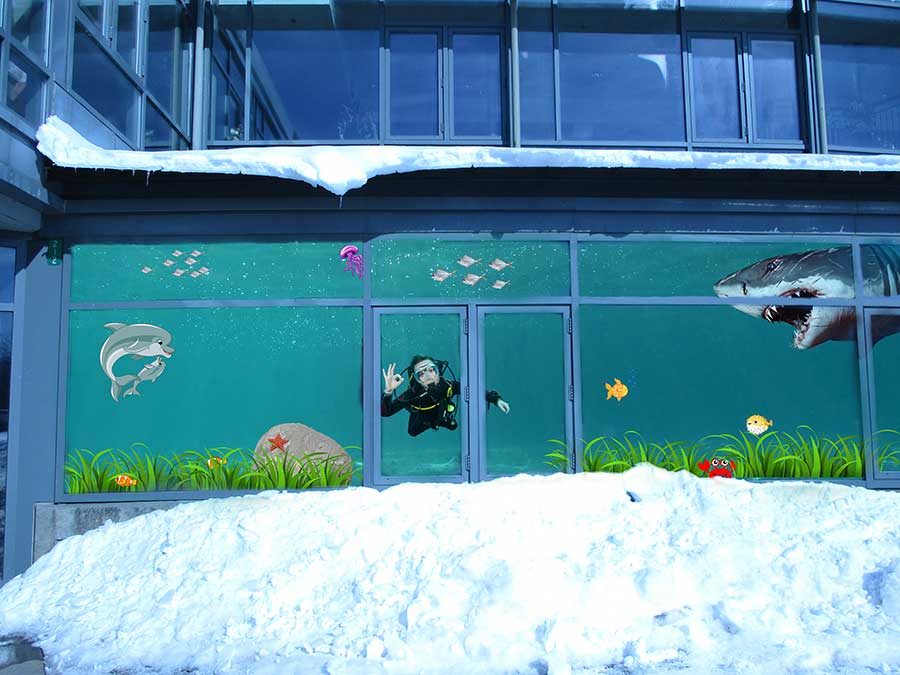 Still leaking after all these years

Another winter season brings another year of leaks to the Willey Library Learning Center. Buckets are placed down, signs are up and it’s hoped that no more wet spots appear on the carpets.
It can be a bit like whack-a-mole, and that was certainly the case during the first week of February when multiple leaks appeared throughout the WLLC.

“I’ve been here on campus about a year now. I am aware of leaks in the library,” said Director of Facilities Michael Stevens. “We’ve come through with Sam, the director of libraries for Northern Vermont University. He’s identified for us four leaks because not only am I new, but my assistant is new too. Over this last event we had though, we identified an additional leak even though some of the leaks that were previously identified weren’t leaking in this last event last week.”
“We do start to yell when water starts dripping on our books, or our patrons,” said Raymond Brior, technical services librarian at NVU-Johnson. “You’re talking about the potential of a slippery floor at the top of the staircase. It’s not ideal. We do try to be pretty quick about deploying what methods we have in terms of signage and things like that to notify people. I think we might’ve put signs on that staircase, just closing it off at one point last fall because we were worried there was the potential for a fall.”

Leaks are one of the more difficult problems to fix. They aren’t predictable and can be difficult to track. Once water is inside the building, it can trickle along the interior for multiple feet before it shows up again on the ceiling.

“The problem with the leaks is that they don’t occur every time that it rains and every leak doesn’t leak the same amount,” said Stevens. “So, the problem is directional. It’s wind-driven. I think it has a lot to do with Mother Nature how severe any specific leak is on any specific day. If they leaked every time that we had a quarter inch of rain or less, it’d be easier to identify where they were at.”

The biggest concern with water leaks will always be the damage caused. Water near paper objects like books or electronics like the computers is a cause for concern and can incur large costs of lost materials.

“There’s one potential leak here that didn’t leak last time that has occurred before over books, said Stevens. “The potential cost could be large if we’re leaking over some of our collection. Our collection is some of our most valued resource on campus. Another one is proximity to computers.”

According to Brior, the damage from leaks over the years appears to be minimal. “Thankfully, the one near the top of the stairs, there’s nothing there,” said Brior. “There’s nothing in the 24-hour room, bookwise, I don’t think it’s ever gotten on the computers in there. The third floor over the years, it did cost us maybe several dozen books. The thing has been that over the past years it only really comes down in two or three places. You can easily see them, but by putting the tarp on, it’s ugly and it inhibits the use of that area. It probably discourages use because it’s just unsightly and cumbersome. Because we know about it, in the dozen or so years I’ve been here, we have only lost three or four books because of it. Unfortunately that was maybe half of a set of a history of the United States written by Woodrow Wilson. They were early 20th century, I think they predated his presidency. They may not have been valuable, age doesn’t equate to value but those were the three or four that were ruined. That was fairly early on in my tenure here as a staff, might have been ‘08 or ‘09 but we haven’t lost anything since. In part because we just keep those tarps up there. We don’t want our materials to be damaged.”

With the difficulty of finding and fixing the source of leaks against the importance of making sure the library isn’t soaked, it is a team effort to dampen the effects of these water leaks between contractors, maintenance and those who work in the areas affected. The good news is two leaks are scheduled to be fixed in April.

“We do have a proposal from a contractor,” said Stevens. “He got up here and was able to review the work just before winter set in and we’ve got a couple of leaks that they are proposing to fix. One’s in the computer lab and the other’s not in the library specifically, more towards the [Writing and Literature department]wing. We’ll be tackling those two as soon as the weather warms up. We have to do further investigation to determine what the causes of some of these others are.”

Still, the randomness of leaks means it is difficult to be comfortable with any solution lasting long. If you assume it is fixed and then it isn’t, then you risk damaging books and computers that can be expensive to replace.
“They’re known problems,” said Brior. “They continually re-emerge. Some of them appear to be a design flaw in the building which took some time to appear. They simply weren’t recognizable. It would be great if there was a permanent solution but with the third floor one I don’t know that there is one. I don’t know that if while I’m here I’ll ever be so comfortable with it that I’ll feel entirely good about removing those tarps from the shelves.”

Professor of Writing and Literature Tyrone Shaw appears resigned to the continuing water woes, noting the recent leaks are nothing new. “This has been a fact of life since we all moved here,” he said, staring balefully at a filling waste basket. “At least it’s better than the initial disaster when we had water cascading into the main lobby. I’m afraid we have a design flaw that won’t go away. What kind of knuckleheads engineered the roof system on this building? They haven’t had to live with this.”