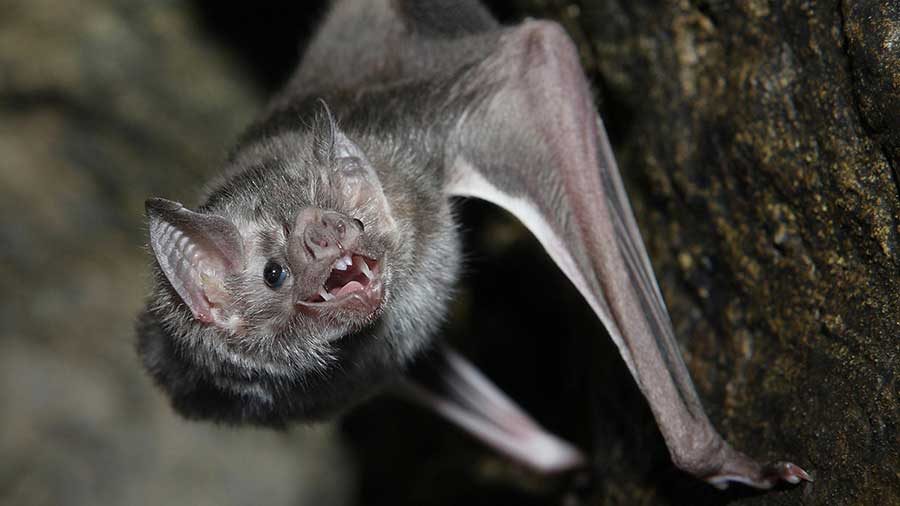 The White Nose syndrome has devastated Vermont’s bat populations since 2006, but the situation has stabilized somewhat according to Vermont wildlife officials. The situation, nevertheless, remains precarious for a number of bat species.

White Nose syndrome was first discovered in a cave in upstate New York in 2006, and quickly spread east into Vermont. The disease is named after the cold weather white fungus that infects the bat’s skin around the nose, ears and wings during the winter while they hibernate. This fungus exhausts the bats much-needed fat supplies that help it survive during the hibernation period. Bats afflicted with White Nose syndrome may act strange, and even leave their hibernation ground during the winter and exhausting crucial energy, which leads to death.

According to the USGS website it’s believed that the disease is transmitted from bat to bat, and it is not uncommon for an entire hibernation site to be wiped out by the syndrome.

Vermont has nine different species of bats. Since the onset of the white nose fungus, five of these species have been listed as threatened or endangered as their populations rapidly declined.

Barry Genzlinger who is a licensed bat rehabilitator and rescuer has monitored White Nose syndrome since its onset. “Some area caves that previously had 15,000 to 20,000 bats now have under 1,000,” said Genzlinger. “It spread extremely fast… It virtually exists in every cave east of the Mississippi now.”

According to Bennett the population of the Little Brown bat, which is Vermont’s most common species of bat, has declined by 90 percent. The Northern Long Eared bat has seen an even bigger impact from the White Nose Syndrome, with a decrease in population around 98 percent.

Although bat populations seem to have stabilized now, the bats aren’t free from threat. Currently there is no cure for White Nose syndrome.
Since 2009 the U.S. Fish and Wildlife agency has adopted a national plan to study and prevent the spread of White Nose syndrome. While Bennett is actively following the national plan, she has also adopted her own strategy as well.

“My focus is to now figure out a strategy to minimize threats to the bats, and help the bats we do have left,” said Bennett. “This strategy includes working on treatments and treatment testing with colleges and universities, as well as working on bio-control within bat habitats to slow down or stop the spread of the fungus.”

According to Bennett, a vaccine is also being explored but as of now there is no vaccine for White Nose syndrome, and treatment options are limited.

Genzlinger says there is no such thing as a perfect treatment option.
“We can use chemicals to kill the White Nose Fungus, but these chemicals kill all the fungi in the cave and change the ecosystem in the cave, which isn’t good,” he said.

One key component to protecting the bats that have survived the outbreak of the fungus is legislation to prevent humans from destroying critical bat habitats.“Vermont has an endangered species act to protect the bats. It’s pretty strong in Vermont,” Bennet said.

However, she noted the laws protecting the bats aren’t perfect and only protect the animal and not the critical hibernation habitat. New legislation that would prevent humans from destroying these hibernation grounds when the bats are not present during the summer months would go a long way to ensuring survival.

“There are a lot of little things people can do as well,” Bennett said.“The Little Brown bat usually lives in homes. Contacting us to remove the bat (safely) is very effective to helping.”

Genzlinger urges people to build bat houses to help provide the surviving bats with more habitat options. “It’s always a good thing for more habitats. There are many plans for bat houses online, including our website at vermontbatcenter.org,” Genzlinger said.

Bennett also mentions that bat reporting is important. If a person reports a bat they see through a form on the Vermont Fish and Wildlife website it helps those combating White Nose syndrome identify surviving colonies of bats. While it might seem trivial, community involvement is a big help. “The future of Vermont bats depends on us,” Bennett said.