Writer’s club: an informal workshop for one and all 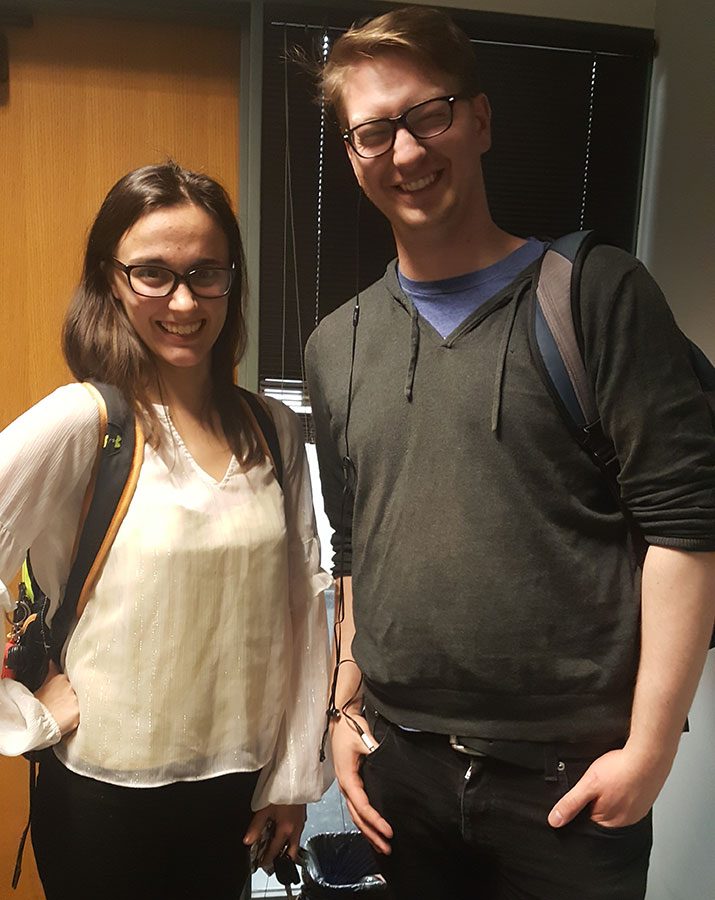 It is Wednesday at 7 p.m. and one by one, students shuffle into Wiley Library and Learning Center room 214. As more and more people enter, the mood lightens and soon jokes are flying. It is a slow day and they have nothing to read. Someone mentions a Reddit and it is pulled up on the projector to share examples of sexist writing in published books. There are laughs as they read turns of phrases such as “breasted breastily.” This is Writer’s Club, a club open to all writers on campus regardless of major to share their writings and talk about their craft.

The club was founded by Jody Kifner and Andrew Lotto in 2016.
“I wanted a space to talk about writing more outside of class and I wanted to hone my workshop skills because I think those make you a better writer.,” said Kifner. “I was never going to do it by myself, and then I talked to Andrew Lotto about it a little. We joked about it back and forth for a while, like yeah, we should do this thing and then you never do. Then two-and-a-half or three years ago, we were like, okay, we’re going to buckle down and do it this semester.”

The primary activity of Writer’s Club is the workshop. Writers can share pieces that they’re working on for their creative writing or workshop courses and get feedback without the same fears of grades.

“I think that’s the scary thing about class workshops is that you know you’re going to get graded,” said Emma Testerman, club president. “As someone who has been in those classes, sometimes I feel like I’ve been graded on the topic itself, like the story. This is a safe place for people to share what they think is a far-fetched story or a dark broody poem. It’s something they can embrace here.”

According to Kifner, the focus of workshop critique is on the elements of style, such as grammar and sentence structure.

“It’s the same goal that the program as a whole has, of just trying to help people develop their specific voice in writing and trying to encourage people to experiment techniques that they see other authors doing,” said Kifner. “Just trying to define for themselves what does and doesn’t work.”

Workshops involve the writer of a piece reading their piece aloud, or having someone else read it, then there will be conversation and critique.

“One of the goals of the club was to help get writers more in tune with the performative side of writing,” said Kifner. “Being able to start to read out loud, especially when it’s your own work, it can be terrifying. I think that’s an important skill that doesn’t really get touched on in the BFA because you don’t have do readings until you’re reading for thesis.”

Critique levels can vary, on request of the author whose piece is being reviewed, between gentler and harsher critiques.

“When I bring myself in, it’s usually after I’ve proofed it a whole bunch, so I want people’s raw commentary. I want to be roasted,” said Rebecca Flieder, the club’s treasurer. “I want my poetry to be absolutely slaughtered because that’s the way I get better, but for first-timers who don’t want to be criticized so hard, we’ll usually go light. We had an instance where someone said ‘Roast me! Roast me!’ and we roasted them, and they got a little bit mad at us. But after I talked to them, they were like, okay I get it and we had a productive workshop after that. It was tense for a bit, though.”

Most creative work can be submitted for workshop including creative non-fiction, however academic essays and fanfiction aren’t allowed. Fanfiction is a form of writing that involves writing that is in established media that isn’t made by the original creators. This poses some problems in critique, as the others in workshop may not know about the original work and it makes it difficult to comment on character or world-building if that isn’t original to the author.

“A lot of us want to get published,” said Testerman. “A lot of us are writing our own stuff and we like seeing our own individual stories that we come up with, along with helping them flesh it out. Building character and so on.”

One of the biggest challenges of workshops is the anxiety that comes with sharing one’s work. Depending on the person, it can take a lot to share creative works to a room full of people and then get feedback on the piece.

“It’s a good time to bring my poetry to a group of people who I really trust. You have to trust people to bring your stuff to them,” said Flieder. “Writing comes out of you as truth, that’s how I feel about it. The things that come out of you is your personal truth. When I wrote “Kaddish,” which was a poem about a family friend of mine passing away, I brought it to them first. They’re my literary family.”

The sense of closeness is echoed by other members of the club.

“It’s home,” said Testerman. “Being in middle and high school and being a writer, it felt lonely, because no one else was. Nobody liked it. Nobody liked those assignments. Now with people who do, it’s nice to know that I’m not the only one who thinks that maybe a certain style is weird or enjoys a certain topic.”

The club is welcome and open to all new members.

“We’re always open, we’re always looking for more people,” said Flieder. “Even if you’ve never been in a workshop before, even if your poetry has never seen the light of day, we want to see it. We want to help you out.”

Occasionally, the club will do other things than workshop, such as putting on videos of slam poems. Some meetings will be comprised entirely of discussion of poems that members had to read in other classes. It’s an informal club that allows its members to relax outside of the pressures of graded workshops.

Writer’s Club gives student writers the opportunity for feedback on any piece that they want to be critiqued. The club is open and welcoming to any students at NVU-Johnson, just please, leave your fanfiction at home.