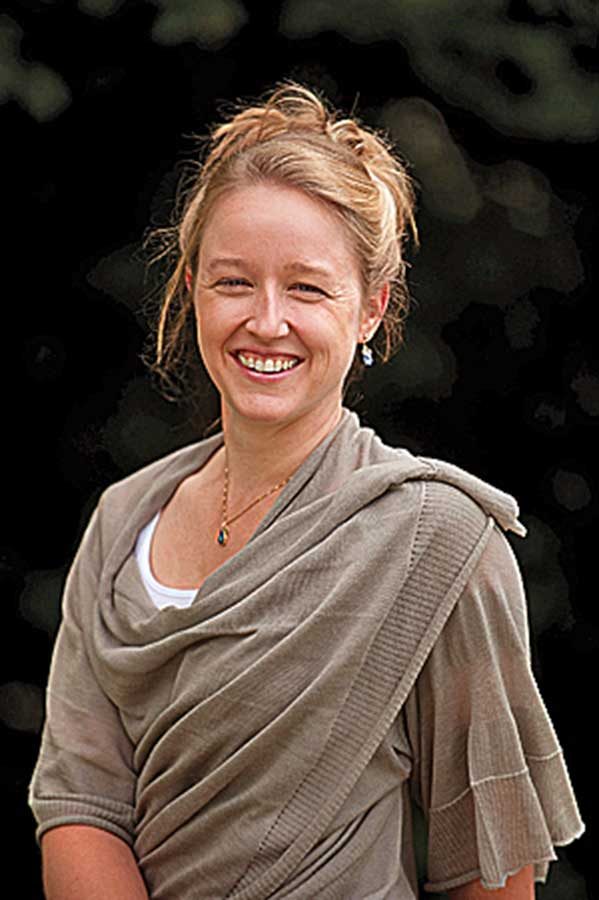 Dr. Carrie Black, Geospace Facilities program director at the National Science Foundation (NSF) visited the NVU-Johnson campus on Sept. 4 to talk about her career and some discoveries in science in the first of the fall’s science lecture series.

She was born and raised in North Wolcott, Vermont in a log cabin and went to Stowe High School. She wasn’t interested in subjects like math and science at the time, although she told the audience that she did really enjoy biology and thought physics was “all right.”

After she graduated from high school, she didn’t know what to do with her life. She thought that instead of forcing herself to go to college to major in a degree that she wasn’t going to like, she decided to take some time off and find out what she would like to do.

“This terrified my parents, absolutely terrified them,” Black said. “It looked like I had no direction, [and they thought], ‘Oh my god, what is happening to our child.’”

That turned out to be a very important four years of her life, during which she realized that she didn’t want to be waiting tables all her life, and instead wanted a career that could be sustainable. She started reading some popular science books and decided to explore a career in the sciences.

Black started at UVM in 2002 and graduated with a bachelor’s degree in physics. She then went to the University of New Hampshire to get her Ph.D. in plasma physics, which she didn’t think she would be studying. In fact, Black’s career through academia turned out to be full of unexpected detours and fortunate surprises.

“I had no idea what plasma physics was until my senior year of college, but that’s where the job opportunities were,” she said. “Also my favorite math professor in college was teaching a plasma physics course. They called me and said that they wanted me to take this class. I was honored. How amazing would it be if a professor called you and said they wanted you in their class? I took a plasma physics class and then I went looking for schools and opportunities where I could study plasma physics, and that’s how I met my advisor. I ended up working on something that was borderline related to fusion, which I thought was amazing, and thought this is something that I want to do.”

That didn’t end up happening as she found that studying the sun became more of an interesting topic.
She then displayed a video that she said completely mystified her when she first saw it, something that could equally be said for this reporter.

“I started watching movies like this,” Black said. “I had no clue what was going on but it’s so cool that I had to figure out what’s happening, and that’s what I did. I spent five years working on the fundamental psychics of magnetic reconnection. It’s basically about how big eruptions get started on the sun.”

Black’s research into space weather and the sun led her to meet with Bernie Sanders and Patrick Leahy in their offices in Washington D.C., which led to her to the NSF and NASA.

“A job opened up, I applied for it and they gave me this opportunity to go manage grant programs,” she said. “I don’t do science anymore, but what I do is read proposals of all the scientists that work in this field and run competitions to determine whose science is funky.”

She also works with radar facilities, one of which is the MIT Haystack Observatory in Massachusetts. Another is the Arecibo Observatory in Puerto Rico.

Before she ended her presentation, she encouraged aspiring scientists in the audience to keep working at what they want to accomplish.

“When you get to the state when you have a Ph.D., or if you want to offer some type of service to one of the agencies, definitely contact the agency,” she said.

“Right now, you are at the beginning of your career. You are an expert in what you want to do. You have some skills that need to be honed. You are going to be an expert in something, and so I tell early career scientists this all the time when I call them and ask them to review something. They go ‘I don’t know, I’m not an expert. I tell them, ‘You are a Ph.D, you are an expert, and I need your opinion.’ So, your perspective is valued, and this is an amazing way to learn how the entire bureaucracy [works]. You’ll get there if you [work to find those opportunities], and I am here to try and help you to find the opportunities that you want.”