If a tree falls… 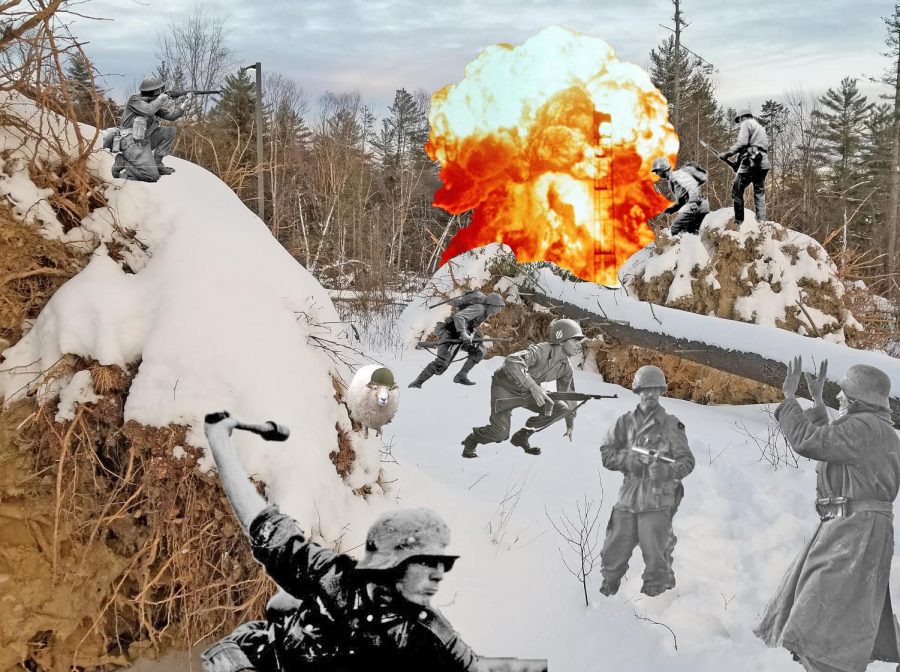 After October’s windstorm, the back side of Johnson’s campus was a sorry sight. A collection of downed trees could be seen just past the campus apartments. Almost a dozen of them, crowns and all, lay beside the road. In the wintery months, snow covered the trunks and frost hardened the dirt that was torn up with the roots.

An unsightly and desolate effect of the windstorms earlier this year, the problem was beginning to be resolved after months of inaction.

Michael Stevens, Director of Facilities, was in touch with several logging companies since the trees came down. After some negotiating and searching, an agreement was reached.

“We got the best price we possibly could,” Stevens said in an interview in late Jan., maintaining that cost was no concern. “It’s going to be cost neutral,” he says. “If not, we might make a little money off of it.”
Once the logging company takes the lumber, “it’s going to depend upon how much money they get paid at the mill,” he says, as to whether there will be profit. “It will be no cost to our budget at all to get them cleaned up.”

All this was unfortunately followed by a minor hindrance. The logging company had some unfortunate news for campus facilities.

“Their equipment broke down this week,” said Stevens. “They were hoping to be here next week, but they’re in the middle of equipment repairs right now.”

Given this difficulty, Stevens estimated that they would be here within a few weeks to clean up the wreckage on campus. Still a short time span, especially given the time of year.

Then, on Friday, Jan. 31, Stevens sent a campus-wide email, stating, “I just wanted everyone to be aware that our logger will be showing up on Monday to start the clean-up of the downed trees. They will also take a little time to evaluate and remove the more precarious tree in the general vicinity.”

Even after the loggers arrived, their job wouldn’t be easy. “That area that they’ve blown down in is actually a wetter area,” Stevens said. Even beneath the snow, the topography of the area is still visible. Creeks cause noticeable divots in the snow, while frozen reeds jut above the powder.

“We’ve tried to get down in that wet area… while it was warmer out, and what we think we want to have happen is we want to do it in the winter while it freezes up,” says Stevens. A snowy field, while colder, is easier to navigate for a lumber harvesting crew.

Of course, after the fallen trees have been cleared out, it’s a waiting game for when new ones will arrive. “Here we’re just going to let Mother Nature do what Mother Nature does,” says Stevens. “We don’t have any plans to invest in trees, because Mother Nature will replace them over time.”

It’s a slow process, but it’s one Stevens believes in. He says that, had a tree died somewhere more central to campus, it would be more likely that they would look for replacements.

“I’m maybe more attached to our aesthetic beauty of the natural Vermont than some,” he says in favor of letting the trees regrow naturally. “But I think that’s a lot of what draws people here.”

Stevens also debunked theories that logging caused the trees to come down. “The college had worked with a state forester and written a forest management plan,” he says, though this happened before he worked at Johnson’s campus. “That was followed, and they did harvest a certain amount of timber off those lands.”

However, “most of these trees have come down continually on the other side of the road.” The area of concern was never part of a logging plan.

“Some of the trees that came down by the disc golf course area may have been impacted by the trees that were removed due to forestry,” Stevens says. However, with no logging taking place in the area across from the campus apartments, Stevens has an alternative explanation.

“It just happens to be, I believe,” Stevens said, “the level of wind in a certain direction at a given point in time.” The area was hit with two rather heavy windstorms recently. Stevens says that there’s not any indication of anything other than strong winds contributing to the trees’ collapse.

As for the remaining trees, Stevens says that they’ll hopefully be left to stand, but it remains to be seen. “The logger will be evaluating some of the standing trees in the area and will be taking ones down that they determine are higher risk,” Stevens wrote in a post-interview email.

In the same email, Stevens addressed concerns for other trees that might come down. One of course, was the weakening of the communal root system that helps keep trees standing.

“I’m not exactly sure if this would [have] an actual impact” he wrote in followup. He agreed it was possible but reiterates that it’d be unlikely. “The last two [windstorms] resulted in the most severe areas of tree loss in areas that were not previously logged.”

In an email after the loggers arrived, Stevens wrote, “the loggers started yesterday and they have most of the trees cleaned up by the mailbox parking lot. The majority of those were downed trees but they did take a few that were leaning and/or damaged.”

The following day, the loggers planned to take down “a dozen or so” along the right side of the road. “It is a little wet in there,” he said, “which offers additional challenges, but we do have a little colder weather on the way. It will be far easier to get into the large blow down area if the wetness has a chance to freeze up.”