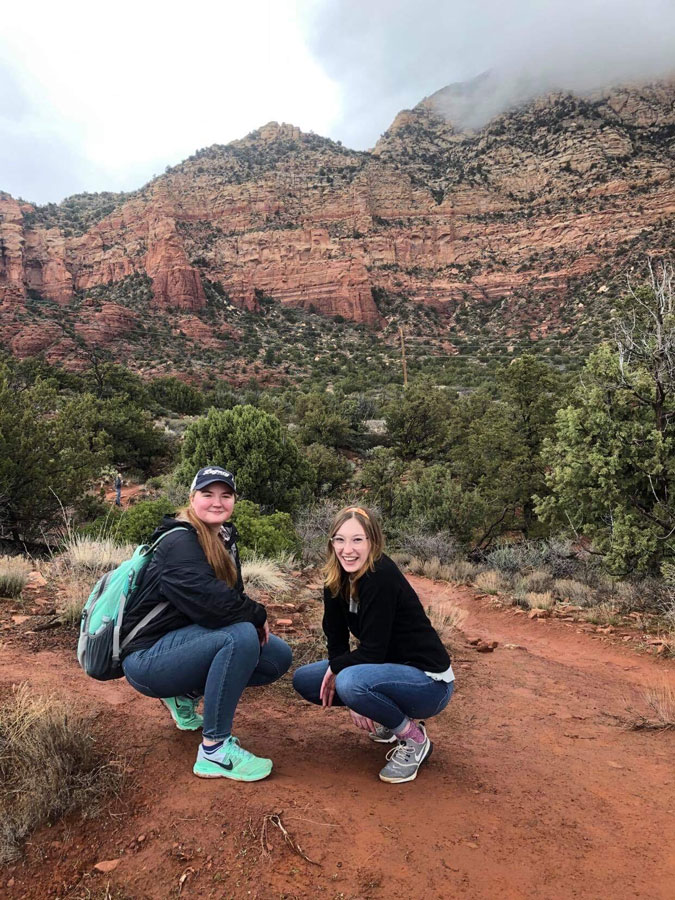 February break for NVU was the last week of the month and for most students, that meant going home and relaxing, trying not to think about the busy world they typically live in. However, some students spent their time giving back to their community.

Becca Palmer, a three-year member of BAB, went to Arizona to clean up micro-trash at Grand Canyon National Park and do a little sight seeing while they were at it. The group ended up picking up almost 350 gallons of trash in the time they were there, and although it was hard work, Palmer says it was very rewarding.

“It’s very easy to get into the ‘this is dumb and boring’ mindset because your whole day is spent picking up trash,” says Palmer, “So it’s hard to find the positives out of that.”

Palmer also said that it was satisfying to have some moments of instant gratification for her hard work. “We picked up a parking lot and then we took our lunch break,” recalls Palmer, “When we came back, there was a huge herd of female elk eating where we had just picked up. That visual definitely impacted a lot of people because that was the first moment of ‘wow, what we’re doing is pretty big in terms of its effects.’”

Another species that was greatly impacted by the group’s work were the endangered California condors, who will pick up anything shiny, thinking it is food. Litter remains one of their biggest threats because they are eating things with no nutritional value that is often times dangerous, like broken glass.
Of course, the trip also had aspects of fun, and being at the Grand Canyon made for some pretty remarkable experiences. “I still don’t think it’s a real place,” says Palmer, “I swear it’s holographic or fake. There’s no way it’s real.”

“No picture, I think does it justice,” says Robert Ferullo, another student volunteer. “You look at pictures and you think ‘oh yeah that’s pretty,’ but then you get there and it’s miles. You have to stand there and just stare at it for a little bit before you can admire it because it’s so unbelievable that it actually exists.”
Volunteers also learned about the culture and history of the area. “As we learned more about the Native American culture that lived in that area, what they used the land for, and the wildlife that lived there and how their ecosystem works it did become more impactful,” says Ferullo.

Back home, other volunteer members helped the local community for three full days of service combatting homelessness. A handful of members spent time helping at local organizations all over Vermont including Good Samaritan Haven, Jenna’s Promise, Lamoille Community House and the Committee on Temporary Shelter (COTS).

This was a much shorter series of trips but had more intensive volunteer hours.

Mostly they were just some extra hands to help during such a busy donation and event season. While helping COTS, volunteers got to visit one of the housing units and work with some of the kids and cook a dinner for the families.

The group did have some down time to grow as a community a little bit as well and working so closely together strengthened the bond.

Sky Vandervort, a student volunteer, said, “I definitely feel like I got a lot closer with the people in my group. It was a really cool experience.”

Volunteers also got to connect with organizations that are not as well known. For example, Jenna’s Promise in Johnson started up just last year. It helps families that are struggling with substance abuse-related issues and could use the help as a new organization.

“It was nice seeing some organizations that I wouldn’t have known existed,” says Vandervort.
Both groups were able to make a big impact in their designated communities and have even more plans for upcoming service trips.