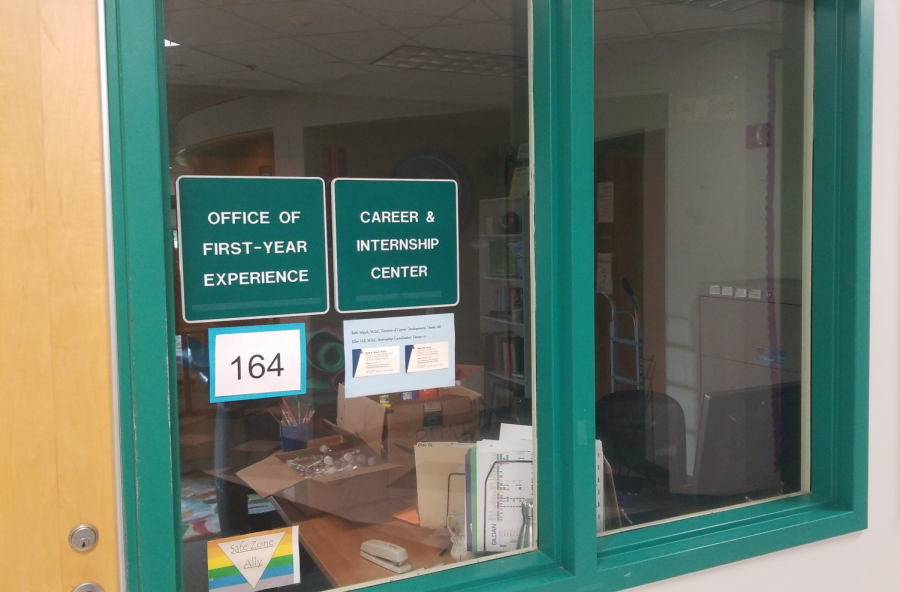 After being formed in 2006 under a Title III grant to increase first-year retention, the Office of First-Year Experience at NVU-J, which helped guide incoming students in their new home, has seen all of its staff leave the university for various reasons. Two left amidst the chaos of the COVID-19 pandemic.
The staff that formerly included members such as Margo Warden, Emily Neilson and Tammy Johnson oversaw numerous programs, including the Creative Audience, orientation weekends and first-year seminars. With no First-Year Experience Office to run them, how those programs will be administered remains unclear.
“Over the summer we’ve identified others on the campus who will now take on the work of making sure that they move forward,” Provost Nolan Atkins said. “All of the… programs that Margo and her staff moved forward are going to continue to move forward; it’s just that they’re going to live with other parts of the university.”

Michele Whitmore is the associate dean of students at NVU-Johnson, and she ran orientation for the incoming students this year. “When I first started at Johnson, I oversaw the orientation program with a colleague of mine, so it made sense to have someone who had some previous experience,” she said.
The orientation itself was significantly altered this year – largely due to COVID-19. “I think from an orientation leader’s perspective, especially those who were returning, it was challenging, because they compared it to years past,” Whitmore said.
She said that while some of the orientation groups were able to make meaningful connections over Zoom, many struggled. “I think part of that was just really not wanting to be behind a screen,” she said.
Over the summer, Whitmore put together a Canvas course to deliver orientation information to students, and it’s a method that she wants to keep. “Students really appreciated having all that information at their fingertips, at their convenience throughout the whole summer,” she said, referencing feedback from orientation leaders and new students.
The modules contained information about the services and programs on campus, such as IT, Public Safety, Student Account Services, Residential Life and more. While orientation was more successful than she anticipated in terms of learning, Whitmore said, “It was just really difficult to really provide a sense of community and excitement for our campus virtually, because you need to be here to really feel it.”
Within administration, there seemed to be confusion about how many people were working on orientation. “It’s not just Michele Whitmore. I want to be clear that she has other people working with her,” Atkins said.
However, Whitmore said that while many staff members offered to provide additional resources for the modules, when it came to running and administering orientation, it was just up to her and the student orientation leaders. For future orientations, she hopes to be able to form a committee to help her manage the responsibility. “It really can’t be done as well as it needs to be done with one person.”

For the Creative Audience, although the course itself has been cancelled, events will still be happening, according to Atkins. What those events would look like, especially in the context of COVID-19, is unclear at this point. As for the class, it has been canceled, at least for the fall 2020 semester. With no staff in the First Year Experience office, there is nobody to review or prepare the questionnaires that traditionally have determined students’ grades in the .5-credit class.
“We saw that Creative Audience was going to be a huge issue, and that didn’t seem to be on anybody’s radar,” said Russ Weis, an advising staff member. It took until the first week of classes for the Creative Audience course to be cancelled, only after the advising office brought it to the attention of administration.
He said it was obvious to everyone in advising that without a First-Year Experience office, the Creative Audience Course wasn’t going to work this fall. “Why that fell through the cracks was a little perplexing,” Weis said, adding that while sometimes these things happen, he thinks the transition could have been much smoother.
Looking forward, the administration still has to sort out some details before the spring semester class is offered. “We’ll probably identify a part-time faculty member to do that work, with some help from an administrative assistant, to actually run that course,” Atkins said.

For first-year seminars, the path forward has its beginnings, but the rest is not entirely clear. Atkins says that he’s “engaged with the faculty in terms of how best to support and move forward with the first-year seminars,” but so far no concrete plans have come to light.
The classes are being taught by faculty as usual, but they lack oversight. “I’m visiting with the first-year seminars, meeting with them either in person or over the phone or over Zoom,” Weis said, but only as an advisor to the students, not to help coordinate the classes.
Atkins said that at this point “it’s just a matter of identifying somebody, or a group of people to oversee” how the classes are running, whether to bring in guest speakers, and other such details.

Also caught in the storm was the advising office. “There used to be six of us last year. There’s now only three of us,” said Weis. With the drop-in members, the first-year advising program has seen some significant changes to its function and methods this year.
Weis now operates as the secondary advisor to all first-year students, who are also assigned a faculty advisor from their major. “I know that the faculty are busy… so we hope that Russ can supplement that,” Sara Kinerson said. Kinerson is the director of advising and has been strenuously working with her team to meet the needs of students.
In past years, the advising office had several advisors dedicated to first-year students. According to both Weis and Kinerson, these advisors would aim to meet proactively with their advisees around four times per semester.
“I’m keeping about half to two-thirds of my function,” Weis said. “It’s going back to more of a reactive model.”
He said that the work has been difficult but the reward of helping students is worth it. Weis mentioned summer orientation, the first weekend on campus, and the add/drop period as being particularly busy. “There’s a job to do, we have to do it and we’re doing it as best we can,” he said.

The Empty Office and Concierge Desk

The First-Year Experience crew’s dissolution has left behind a physical office – one that used to be quite busy. “There was a big room, there were snacks and couches. It was a welcoming environment,” Kinerson said. “It was much more of an interpersonal workspace than a program.”
“The Office of First-year Experience was really one of the main places that students would go when… they just needed a good person to talk to,” Kinerson said. Now, however, the office is empty, and the desks are covered in boxes.
According to Atkins, the office will likely have new occupants soon. “There are others in the building who need more space, and they’re looking at that space,” he said. He said that academic support is in need of additional rooms to offer tutoring and testing for students, and that the old First-Year Experience office was under consideration.
As far as having a place to go to get questions answered, a concierge position has been created for student workers. The concierge can be found in Dewey, and acts as a reference point for new students, and can help them schedule appointments with advisors and other faculty or staff members.

Atkins stressed that the programs previously offered by the First-Year Experience Office are important and will be continuing to provide engagement for new students. “For a couple of them, we’re stilling trying to sort out how they’ll move forward and be overseen, but rest assured that that will happen,” he said.
As far as resources for students, Kinerson said that the offices in Dewey will be doing their best to meet student needs. “Whatever it takes, our office is there,” she said. “I hope nobody feels like they’re wandering without the Office of First-Year Experience.”