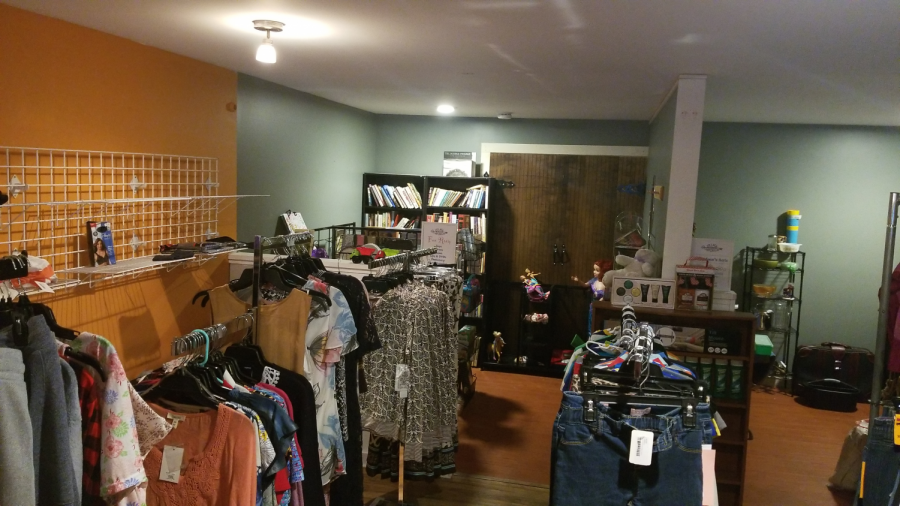 A new store front on Main Street Johnson has opened, and it’s selling just about everything it can get into the building. “Anything from clothing to accessories… housewares new and used, toys, books, you name it,” said Lisa Rowell, who owns and operates the store with her son, Jordan.
“It’s something that we’ve always wanted to do,” Rowell said. She and her son acquired the property on July 1, and “everything just clicked into place like it was meant to be.” Rowell said that despite the pandemic, the opening was surprisingly smooth, something she is grateful for.
“We were like, ‘Hey, let’s open a store during a pandemic!’” she said. She said that it’s been a very strange experience, but the support she’s received from the community, and the surprise success of the business, has made it much more manageable.
Rowell said that for the month of July, they made all the preparations and were able to open the Emporium to customers in early August. Much of the store’s initial stock came from Ebay purchases, bulk lots, store closings and donations. Rowell said getting stock for the store was one of her biggest worries, but it’s now not a concern.
The store is packed. Racks of new and used clothing take up a great deal of the floor space – a sea of fabric and colors for sale. There are cardigans, jeans, t-shirts and coats of all sorts. Clothes are sorted by style and color and take up most of the space in the Emporium.
The store can range from office supplies to cardigans to dishes. Handmade items, such as jewelry or stuffed animals, are also for sale, crafted by local artists and Rowell herself.
In the back of the store are two rooms. One is labeled “The Fun Room,” which hosts books, toys, and games. The books are all sold for 50 cents each, except for specially marked ones. The other is “Grandma’s Attic,” which has a variety of vintage kitchenware, such as coffee grinders, cookware, and drinking glasses.
The store has a welcoming atmosphere, if a bit overwhelming, when you first step in. The sheer number of clothing racks and display tables are a lot to take in when the store is first entered. Rowell says she’s trying to find a way to organize the store more effectively, but that a lot of her customers seem to enjoy the cluttered environment.
Rowell said that the clothing, accessories and books are some of the best-selling items in the Emporium. “Any kind of interesting, unique furniture piece that comes in, we sell it pretty quickly,” she added. The vintage objects in the back of the store also draw a lot of attention.
“We don’t pay ourselves yet, because we want the store to succeed,” Rowell said. “Post-pandemic, the ideal would be [that] we do this full time and just make it a thriving staple in the community.”

“If I could make this my living, my post-retirement, it would be just wonderful.” Until then, she and her son keep the store open when they have time while they each continue to work full-time jobs. “This is kind of a part time venture for us, just to see how the community receives it,” she said.
Rowell and her son have different theories on what the store’s future will look like. “My son would love to see multiple locations,” Rowell said. She described his vision as “A pop-up [store] in every little town.” Rowell believes her own plans are humbler. “I’m happy to be right here in my little space.”
“We have several regular customers,” Rowell said, describing the positive reaction from the Johnson community so far. “We have formed some really beautiful relationships with our community members, so it’s become more about our interactions with them, and finding things that they would like to have than it has even a business venture.”
To maintain that energy, Rowell said “each month we want to make a donation to a local entity in the community,” taken from the store’s proceeds. For the month of August, Rowell said that donation is going to North Country Animal League.
“We really appreciate how the community has supported us. It has really floored us, the number of people who come in,” Rowell said. Rowell and her son have lived in Johnson for six years, so the town’s small community resonates with them. “It’s that kind of connection that I think is really important for us,” she said.
The Village Emporium is open 5:30-7 p.m. on Tuesdays through Fridays, 10 a.m. to 7 p.m. on Saturdays, and 12 to 5 p.m. on Sundays.