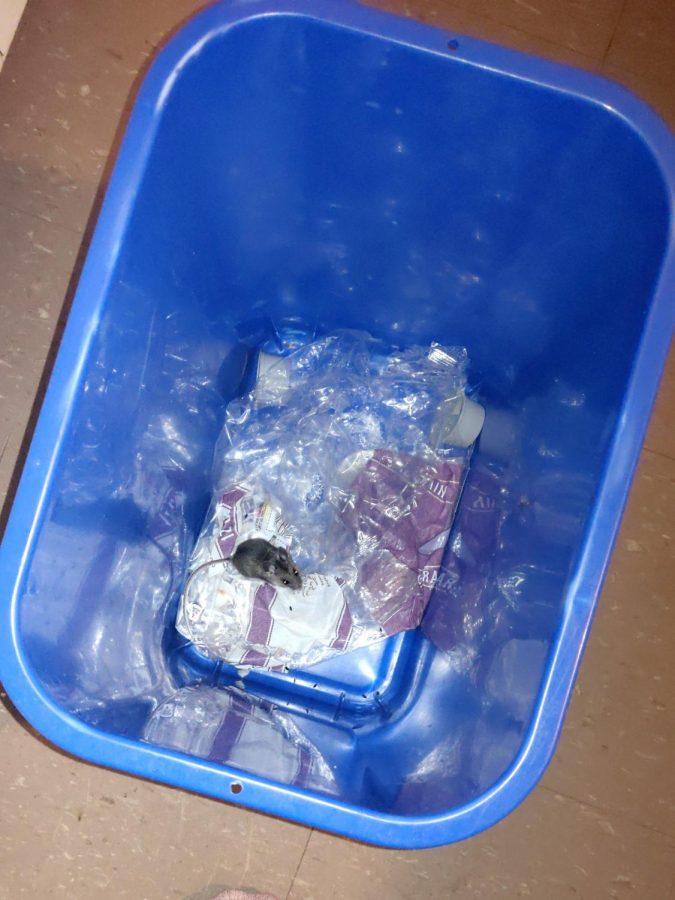 The rodents that have been plaguing NVU-Johnson’s campus apartments will hopefully see a decline with the introduction of traps to the outsides of the most affected buildings.
“The first time I knew we had a rodent problem was late September,” said Isaiah Perry, NVU-Johnson student and campus apartment resident. “My roommate/partner and I started hearing scurrying and munching in our walls and ceilings. This quickly became an issue every night, making it hard to sleep because it was so loud.”
Perry is far from the only resident to have issues with the rodents. A petition signed by over 20 students was sent to Director of Residence Life Jeff Bickford, NVU President Elaine Collins, Dean of Students Jonathan Davis and Dean of Administration Toby Stewart.
“We are kept up late at night by the sounds of chewing and scratching, disturbed by the presence of rodent feces, and horrified by the complete apathy of the Residence Life department to fix the problem,” reads the petition, which was sent on Oct. 13.
“The Residence Life department seems to have initially tried to shrug off the concern,” Perry said. “Then [Bickford] did something of a 180 and hired rodent control people to investigate some of the apartments.”
The company hired was LeBlanc’s Pest Control, a company based out of North Troy. “They are dealing with a typical situation that happens in the fall,” said Michael Stevens, director of facilities.
As the weather gets colder, mice often burrow into homes for shelter, warmth and the possibility of food. “We admit that the presence of mice in buildings is not an uncommon problem during the winter months of the year,” reads the petition.
However, the letter continues to add “that the sheer volume of complaints from across the Apartments paints a larger picture of a true infestation, rather than one or two mice camping for the winter.”
To combat the presence of the rodents, representatives from LeBlanc’s are placing traps outside of the apartments.
“To control the rodent population… you want to do your work on the outside of the buildings,” Stevens said of the pest control’s methodology. The traps that LeBlanc’s uses are outfitted with bait that lures rodents into a space that they can’t escape.
A representative from LeBlanc’s will be coming to campus regularly to check on the traps. “I don’t know exactly what happens when that professional service checks on those traps,” Stevens said. “I don’t know that I want to ask.”
Of course, keeping rodents out won’t help residents who are already seeing evidence of mice within their apartments, such as scratching in the walls, feces in cabinets, and sight of the unwanted visitors themselves.
In this case, residents were encouraged by Bickford to put out traps in their apartments. In his emailed response to the petition, he tells students, “if getting traps is a hardship, please let me know.”
However, as the petition points out, “Many students are complaining only of the mice in the walls scratching and clawing and have not seen them emerge—traps would not help this phenomenon.”
The other preferred option for many students would be to invite a new animal guest into their apartment, namely a cat, to help alleviate and exterminate the rodent infestation. Unfortunately, this is not an option for a number of reasons.
Pets, aside from emotional support and service animals, are not allowed in campus residence halls due to potential messes and a variety of other factors.
Bickford also pointed out in his initial response to the petition that “If you happen to get a cat that is terrible at [mousing]… you have the problems of cat ownership without the benefit of reducing the rodent problem.” He cites leftover pet food being an attractor for mice, as well as pet hygiene being a problem of its own.
“In general, I think it’s fair to say that the person occupying a space has a duty to report issues that arise, and cooperate with efforts to correct the issue,” Bickford continued. “The property owner has an obligation to do whatever we reasonably can to correct the issue.”
Perry said that he and his partner have not put traps out in their apartment yet, as “there has been no evidence of rodents breaking all the way through our walls yet.” However, he anticipates the need may arise soon.
Both Perry and the petition point out that as mice chew through the walls and insulation, there is a risk of them biting into electrical components and starting a fire.
Perry also cited the thermal integrity of the apartments being compromised as a concern. “This directly affects us as it gets colder out, because it makes heat insulation worse.”
As the temperature continues to drop, hopefully so will the rodent populations currently overwhelming the campus apartments. “If there isn’t change, we’ll definitely be going back to our pest manager and asking for their counsel,” Stevens said.
However, he is doubtful that such action would be necessary, and adds that “We have no reason to believe that this accredited, licensed professional isn’t more knowledgeable on the topic than us.”