Caporale to leave in May: implications for OELT program unclear 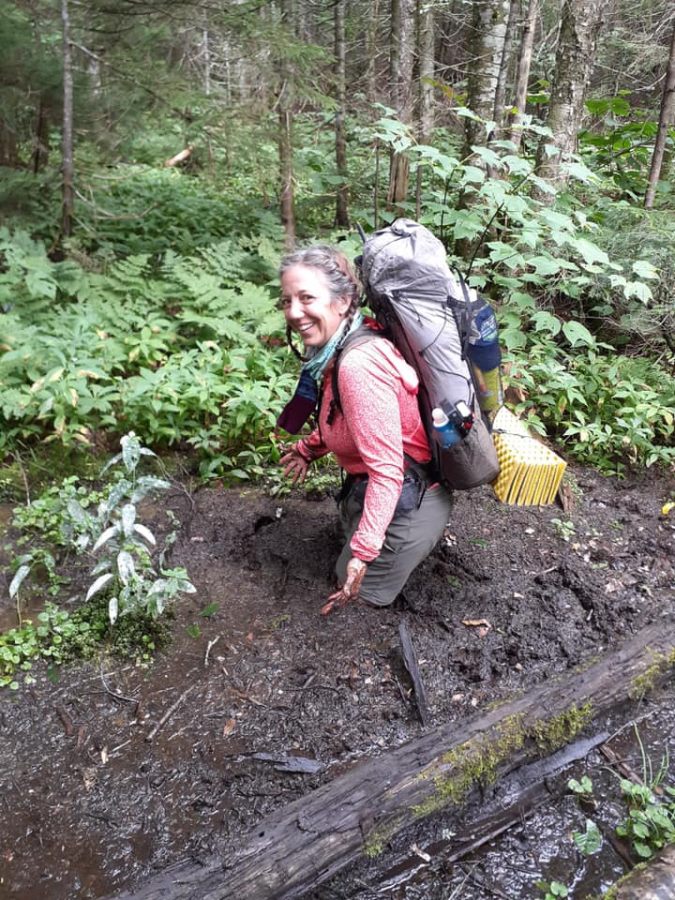 This spring will be Visiting Assistant Professor of Outdoor Education Clemencia Caporale’s last semester at NVU-Johnson after serving on the faculty for two years
Caporale’s pending departure in May leaves the Outdoor Education, Leadership and Tourism program on the NVU-Johnson campus with only one full-time faculty member.
This is problematic according to Professor of Environmental and Health Sciences Brad Moskowitz, who also heads the OELT program on the Johnson campus.
“It is going to be a challenge to just deliver the program on this campus by myself,” Moskowitz said. However, he plans to work extensively with professors of the OELT program on Lyndon’s campus.
Moskowitz has collaborated across campuses before. He and the Lyndon faculty worked to align their programs into a single major with the birth of NVU. “Those folks will help,” he said. “It’s just a matter of scheduling and coordinating.”
NVU Provost Nolan Atkins is also in favor of Lyndon faculty lending support. “Between other full-time faculty colleagues at Lyndon and part-time faculty, we’ll be able to offer the courses that that they need,” he said.
Maintaining the part-time faculty will be absolutely essential moving forward, Moskowitz said: “I think we need to hang on to the part time faculty that are so critical to helping us deliver the program.”
Regarding the decision not to renew Caporale’s temporary appointment, Atkins said determining which programs need support depends on a number of factors, primarily enrollment to faculty ratio.
Atkins said that in the past four years, OELT enrollment has declined from 11 in the senior class to four new incoming students this year. “So definitely, these are hard decisions to make,” he said.
As for the future of the OELT program on the Johnson campus, Atkins noted that a number of factors are in play. “There’s a larger analysis of academic programs that’s happening at the system level,” he said.
“Part of the reason that I don’t know what’s going to happen with OELT is because that conversation… may or may not inform what happens with OELT on our two campuses.”
Caporale says her time at NVU has been rewarding, especially working so closely with her students. “I worked really hard my first year to build that camaraderie and community because I knew it was important to the students in the school,” she said.
“The first semester I knew Clemencia eventually got to be very stressful for me,” Abby Burgess said. “Clemencia noticed and offered me one of her free coffee cards so we could go sit and chat about everything that was going on.”
Burgess, a junior in the program, said the decision came as a shock to her. “Having Clemencia for the past two years has been invaluable to the OELT community and programs,” she said.
Mia Blackwell, an OELT senior, agreed with Burgess. “The outdoor community at NVU has been lucky to have Clemencia as a professor, and it will be hard to fill her shoes once she moves on,” she said.
Blackwell added that Caporale was the type of professor, “to reach out if she can see someone is struggling, because she wants to help her students succeed.”
“When I announced I was leaving, [it was] heartbreaking for these students,” Caporale said. “This is their family. This is their outdoor world.”
Burgess also noted that Caporale was valuable for the diversity of the program. “I’ve had amazing class experiences with Brad Moskowitz and Ben Mirkin, two of our awesome male instructors,” Burgess said, “but I can say that… having Clemencia be a part of this program has been immensely important.”
“Last year, they ran a statistic that 60% of our program, or a significant portion of our program, is female students,” Caparole said, adding that it’s important “to be able to have someone that the women in our program can identify with.”
Blackwell raised concerns over the declining number of students in the program. “My senior class has around fifteen students who were in my intro class that will be graduating with me,” she said, but is concerned that the program will suffer more because of Clemencia’s departure.
“I fear what losing Clemencia signifies for the future of the OELT major,” Burgess agreed. “Vermont is such an incredible place for outdoor recreation, plus it is what drives a huge majority of the economy here. We should really be supporting and building this program especially.”
Caporale said that several students have already expressed concerns over the future of the program. “We are doing everything we can this spring to set [students] up for success,” she said.
“But some of that is out of faculty’s control… If upper management is not supporting the outdoor program, then it is going to suffer, our students are going to suffer, and our community is going to suffer.”