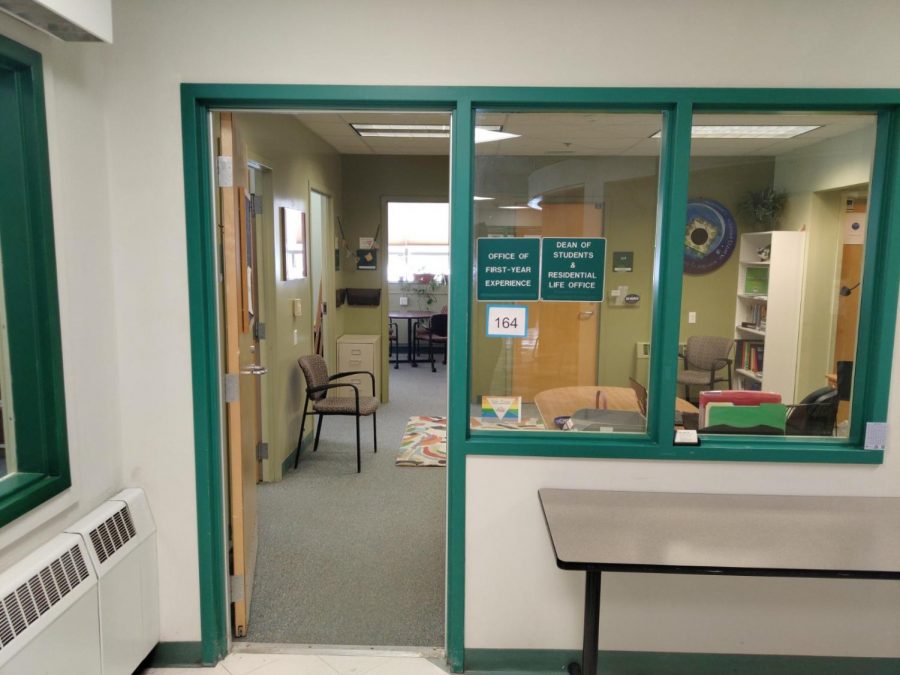 The front entrance to the new dean of students office, located in the old first year experience space

Dewey hall experienced a thorough shake up during the 2020-2021 winter break, and students may find familiar faces in unfamiliar spaces.
The previous Office of First-Year Experience is now home to the Dean of Students and Residential Life offices. Admissions has occupied the 1867 room to provide an isolated space for prospective students who wish to visit the NVU-Johnson campus, and Academic Support Services will be filling in the space vacated by the dean of students office.
In the final weeks of the fall semester, Dean of Students Jonathan Davis and Associate Dean of Students Michele Whitmore proposed the move. The initial plan was to reinhabit the space that the first-year had vacated and bring back a space for students to visit and find support.
In addition to Davis and Whitmore, Residence Life Director Jeff Bickford relocated to the new space. The newest member of the team, Sarah Thornton, also has space in the office. Over the past few weeks, the team has been working to get the new space up and running to be open to students in the early weeks of March.
Academic Support Services is expanding their office as a result. The former dean of students’ office will be used for additional tutoring spaces, thereby enabling that office to accommodate a larger student load.
The final weeks during the winter break were filled with packing boxes and moving furniture. Offices were turned upside down as their contents were reassigned to new spaces. Finding closets enough to suit the change in layout proved to be a challenge.
The largest room in the new dean’s office, affectionately nicknamed “the fishbowl” by students and staff alike, was the center of attention for Whitmore, who is hoping to be able to officially bring the room online for students to come relax and get a cup of tea, while also offering workspace for student workers and resident assistants.
Given the state and university restrictions centered around COVID, it may be a while before groups of students can utilize the reconfigured room, but it is hoped that the office can be a space to foster school community once the restrictions are lifted.
The Dewey concierge position, which was previously stationed outside both the Academic Support Services office and the dean’s office has been moved to the fishbowl. It was decided that there was not enough student foot traffic to merit the position, and instead the student helpers will be directly involved with the dean’s office, though they may work in other spaces as needed.
The dean’s office has also started searching for a full-time staff member to station the front desk, though the position had not been filled as of press time. Whitmore said her goal was to make the office as inclusive and friendly as possible, hoping to revive a sense of community spirit in the new space.