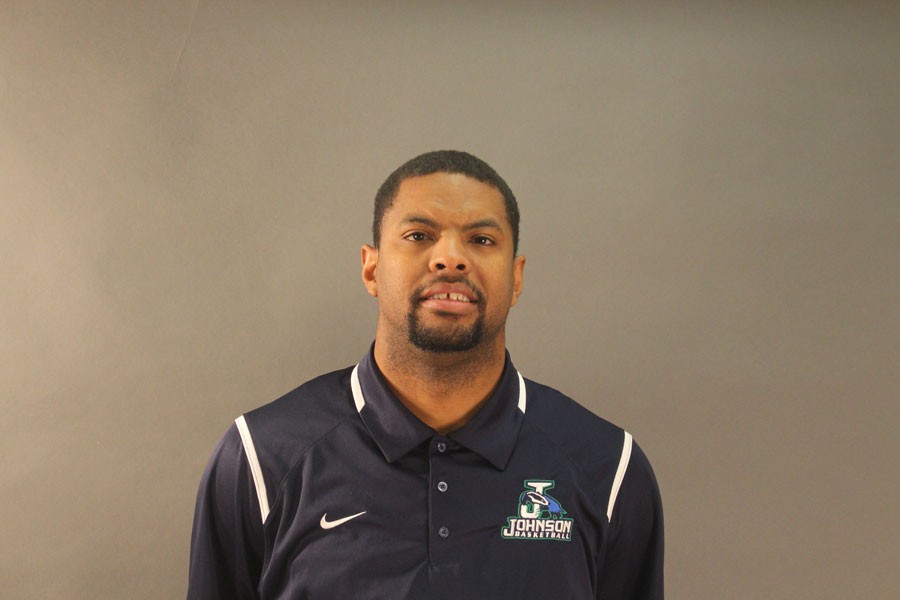 Assistant Athletics Director and Head Coach of Men’s Basketball Miles Smith is leaving NVU at the end of May, having served in those positions for the past six years.
Smith graduated from Johnson State College with a BA in Anthropology in 2009 and was an inspirational captain of the basketball team and president of the Student-Athlete Advisory Committee in his senior year.
He then worked in admissions for several years before spending three seasons coaching at Mercer County Community College. Other positions included assistant basketball coach at The College of New Jersey and the first head men’s basketball coach at the newly co-ed Wilson College in Pennsylvania.
Smith returned to Johnson in 2015 as head coach of men’s basketball and assistant athletics director and the following year won the NAC Coach of the Year award for his transformational work redefining team culture at Johnson State.
In a 2015 interview with Basement Medicine shortly after his return to Johnson State College Smith noted, “A lot of people give you the ‘head coaching’ title. I don’t consider myself a coach. Yes, I’m definitely that, but I’m more of a teacher. Everything I do is teaching. My practices are teaching. My games are teaching. Any way that I can implement life lessons into basketball, that’s what I do. And that not only came from the people that I’ve connected to through coaching, but most of all the people that I connected with at Johnson State.”
From the onset of his coaching career here, students have been drawn to his unique coaching style. Rahim Bunch, who followed Smith from Wilson College to play for him, noted in a 2016 Basement Medicine article, “We have a bond and a trust for one another that I never got to experience with any other coach. He’s a fun, down-to-earth guy who loves his basketball team, and most importantly, wants to see them succeed in life. I hope others are as fortunate as I was when it comes to being coached by Miles Smith.”
Smith’s influence has been felt far beyond the basketball court as he has been a steady advocate for social justice, anti-racism, and inclusion both on campus and in the wider community. He served as faculty advisor for COMSA (Coalition for Minority Student-Athletes), which was created in fall 2020 to provide a safe place and support system for all minority students.
“For the last 6 graduation ceremonies that I’ve attended at NVU-Johnson, our minority students are graduating without ever having a professor that looks like them,” Smith said last October about the importance of COMSA. I can only imagine what that looks like for students in the Lamoille County BIPOC community ages K-12. There is a strong need for the Lamoille County BIPOC students to freely discuss their respective experiences. COMSA will look to give them that opportunity. COMSA means more to us than just another group that is [on] our campus. This is the beginning of a remarkable family that will continue to cultivate self-confident leaders and educators.”
Associate Professor of Education and chair of the education department Hannah Miller has worked closely with Smith in their work on VSC Social Justice, which is an unofficial group that meets monthly to “build capacity across the institutions with equity and diversity inclusion initiatives,” according to Miller.
“Miles has an uncanny ability to bring people together to work for transformation for equity and justice,” she said. “He has a strong vision for justice and he pushes for that vision, even in the face of barriers, and when it feels like no one is listening. He brings this passion for justice and equity into everything that he does. Miles has a fierce commitment to equity, justice, and inclusion. He is one of the voices on campus that pushes us to think critically about who we are as a community.”
That dedication, according to Miller, has been felt in the classroom as well as on the court, noting that Smith has proven to be a popular and effective instructor as well. “He is a person students trust and go to when they need advice. He’s also an amazing educator,” she said. “He is teaching a course in the education department this semester and I hear from his students every week about what an amazing instructor he is and how much they are learning. It is impossible to describe all of the ways he has contributed to transforming our campus and community, but I will say that he is a natural leader and teacher, and I have learned a lot from working with him in the past few years.”
Smith will be going to the College of New Jersey, where he will work in their athletics department as the assistant athletics director for student development and compliance.