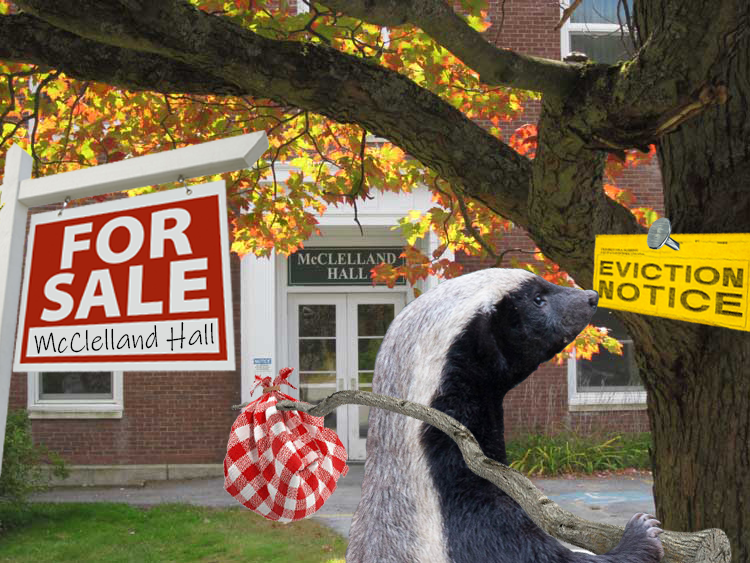 The great McClelland migration has come to an end.
This semester, the faculty and staff that previously resided in McClelland Hall have made the move from their offices down the hill to a central location on campus: the third floor of the Willey Library and Learning Center.
The education and behavioral sciences departments have moved to the front offices, taking up residence in the offices recently held for part time faculty.
Chair of Behavioral Sciences department Gina Mireault, Chair of Education department Hannah Miller, and Professor of Anthropology and Sociology Janet Bennion were among those who moved up from McClelland, and the consensus was one of satisfaction.
“Overall, the move was awesome, because I love being up the hill,” Miller said. From Miller’s perspective, one of the important factors in the move’s success was that the departments had the whole summer to make the move, which Miller explained made life easier for those involved.
There were some things that she and the others had to give up, including the frequented social space that the McClelland lounge provided, as well as other niceties such as the student research rooms, readily available conference spaces for meeting with students and familiar classroom spaces.
Miller and the others also had to leave behind a sense of identity when they arrived in their new home.
“We felt like a little family down there,” Miller said. “We had our own culture and our own space. We felt like we were our own entity.”
However, all of that was worth parting with in the end, said Miller. After explaining that she would make the move again, difficulties and all, Miller noted that the transition has mostly been smooth.
“It’s so nice to have spontaneous interactions with humans on campus. It feels much more lively and social, and people stop by my office,” Miller said. “I love it, and that puts me in a great mood.”
Despite that feeling of success, Miller still feels like an invader at times, having moved into an already established community. Change brings difficulty, Miller said, an adjustment that everyone involved with the move has had to make.
Another challenge that the incoming faculty have had is the size of their new spaces. Janet Bennion was struck by the difference in office size while she was moving her collection of artifacts, though she has managed to find space for some of the displays just outside of her office.
“For me, the process has been pretty straightforward. Physical Plant did all of the heavy lifting, literally – moving furniture up the hill and out of many of the offices in the WLLC. All I had to do was arrange it,” said Mireault of her experience during the move.
One of the recurring themes pivotal to the overall satisfaction of those involved with the move was that of being able to be a real part of campus life in a way that was often absent from down the hill. Working in conjunction with colleagues has become easier, and the sense of belonging to a new, broader community has begun to flourish.

“I was talking with Hannah and Gina and Tyrone about this,” Bennion said. “Jensen can just pop over from down the hall to discuss curriculum. I can go over and bug Tyrone about faculty chair duties.”
Of those who were already located on the third floor of the WLLC, there have not been any hard feelings about the new neighbors. Stephanie Cravedi, a part-time faculty member in the Department of Writing and Literature, was enthusiastic about the change up, saying that she looked forward to having more faculty in one place. Others, including Tyrone Shaw, have said that they are excited about the possibilities that the move has provided.
“It was getting to be a sad, creepy dead zone over there,” Shaw said, pointing toward what had been the humanities wing. “The empty offices were a constant reminder of how many faculty we have lost through retirements and resignations. Now, that area is vibrant and alive again. I think it’s great!”
A new office space wasn’t the only thing that the McClelland faculty had to contend with when they arrived in their new location. New classrooms were also a part of the list of changes. Miller said she has been enjoying the process of working in new class spaces as well as getting a feel for which ones she prefers.
One thing that nobody will miss this year is the commute up and down the hill for classes this winter. As large as the divide was for faculty and staff, it was also a major hurdle for students. Both Bennion and Miller made note of how winter driving conditions made the parking lot and hill the center of numerous accidents.
In Bennion’s case, she is thankful that she doesn’t have to spend the first five to ten minutes of every class in a mandatory complaining session about the hill and its perils. Worse was the walk in the middle of January for those who didn’t drive, as the sidewalk was often slippery and occasionally unplowed.
In addition to the education and behavioral sciences faculty, the entire administrative infrastructure of McClelland has made the move as well. Even some of McClelland’s lounge furniture came up the hill with the faculty and staff.