Just a hobby… or sew it seams 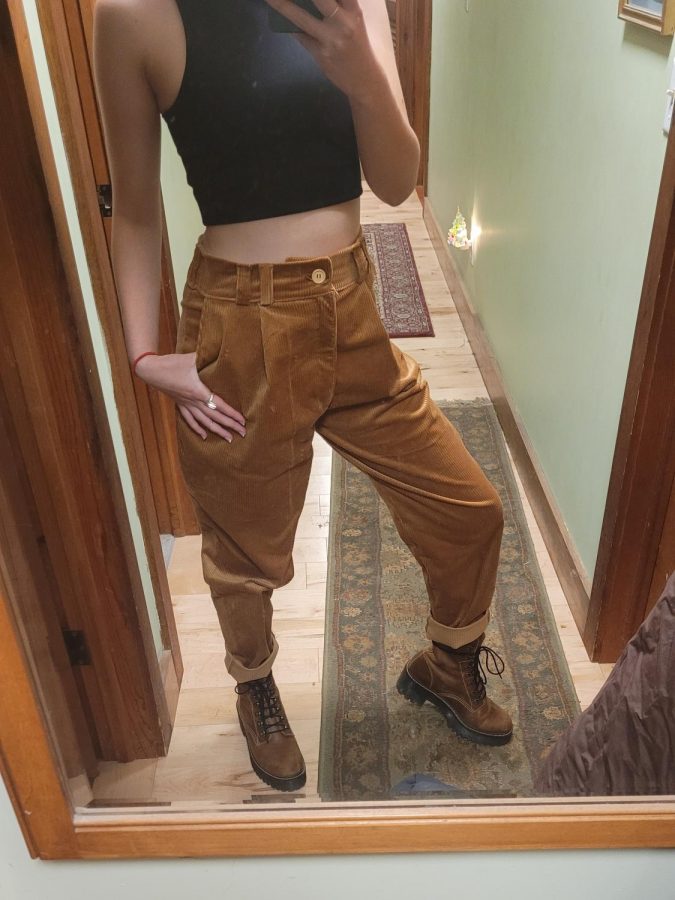 The pants in question

From the basement of my house came a soft whirring sound. My grandmother was sewing, carefully guiding fabric through her old Kenmore sewing machine as a kindergarten aged Delilah watched. Over the next few years, I would learn to sew, under her guidance.
We began with bags and pillow cases, so little me could master a straight stitch and get in the habit of sewing seams with the fabric right sides together (also known as “pretty-pretty”). These bags were far from perfect, only sometimes hemmed, and rarely had straps. Occasionally I would attach a button, but without a button hole to match it. While my creations were barely usable, I was learning skills that would stick with me ten years later.
As I grew up, I started sewing more independently, only needing the occasional help from my grandmother with threading the bobbin (a small spool of thread that goes inside of the machine) or changing out the needle. My sewing projects switched over to altering clothes; I had a new obsession with thrifting, and often needed to take in the waist on pants, or remove the sleeves from a shirt.
Rather than looking up tutorials, my learning was based on estimating and experimenting. This was in part inspired by Micarah Tewers, who makes amazingly chaotic Youtube sewing tutorials. This meant my results were wildly inconsistent, but I was gaining more knowledge of why things work the way they do, and was having more fun than I would have if I had followed a tutorial.
Recently, I’ve been sewing clothes from scratch. I buy sewing patterns from a variety of sources, but primarily from Etsy so I can purchase from a small business or young designer. I buy fabric from Joann Fabric, which unfortunately seems to contain more fleece and cotton than any useful apparel fabric. For pants or shorts, I go with linen, corduroy or jean, and for a top I typically choose a stretchy knit fabric. You should always use the fabric recommended in the pattern you’ve bought, although I break that rule occasionally.
At the start of a project, I can be found sitting on the floor of my living room with fabric and pattern pieces stretched out around me, cutting out pieces until usually 10:00 or 11:00 at night, usually with an episode of Critical Role in the background. My fabric scissors are still the same ones my grandmother and I had used ten years prior.
Once all my pattern pieces are cut out, I move on to pinning and sewing. My grandmother’s old Kenmore machine still works beautifully despite being more than 50 years-old, and by now I’m well acquainted with its quirks and features. I begin a project by changing out my needle to one suited for the fabric, and then begin sewing. Since most of my sewing is done in the evenings, I’ve stolen one of my father’s shop lights to give me better lighting, and can be found hunched over in the bright corner of my living room that is my sewing area. I don’t have a serger, but I find that an overlock stitch works quite well for most of my needs.

For items with zippers, pockets, or more complex steps, I’ll follow the instructions, but for simple shirts or seams, I feel confident in my ability to alter a pattern and sew without instructions. I own just one shirt pattern (Kiana Bonollo’s “Cap Sleeve Mock Neck Top” from Etsy) but I am comfortable changing the length, neck style, and sleeve style as needed, so I can get tank tops and turtlenecks out of the t-shirt pattern. Patterns can be tricky at first, and understanding how flat pieces will end up looking when assembled and put on a body is even more of a challenge. After so many years of sewing, I’ve gotten much better at it, but still mess up on occasion, and end up with a collar that is too tight, or a shirt that is too cropped.
I’ve learned to use additional features of my sewing machine as I’ve needed them. Recently I bought a twin needle, so my hems can look more professional. I’ve also learned how to use the buttonhole foot, to get cleaner button holes. Despite owning the sewing machine for far longer than I have, my grandmother had never learned to use that feature and was impressed with the results I was able to produce.
The clothes I make certainly aren’t perfect. A pair of shorts I made have the pockets on backwards, and one of my shirts has a hole in the collar. They may not be good enough to sell, but they’re good enough for me to wear. I like being able to make things fit me perfectly, and I also am glad I’m not contributing to the fast fashion industry. When I make my own clothes, the only person being paid less than minimum wage is me!
I’m not entirely sure what my future in sewing may look like. Designing clothes and making patterns certainly appeals to me, although I don’t have the training or experience to do it professionally. I don’t currently feel confident enough to sell my creations, especially without owning the original design, but I think in the future, that may be something I would like to pursue.
All of this is to say, if you’re unsure of what to get me for Christmas, a gift card to Joann Fabric would be much appreciated.