It’s all uphill from here 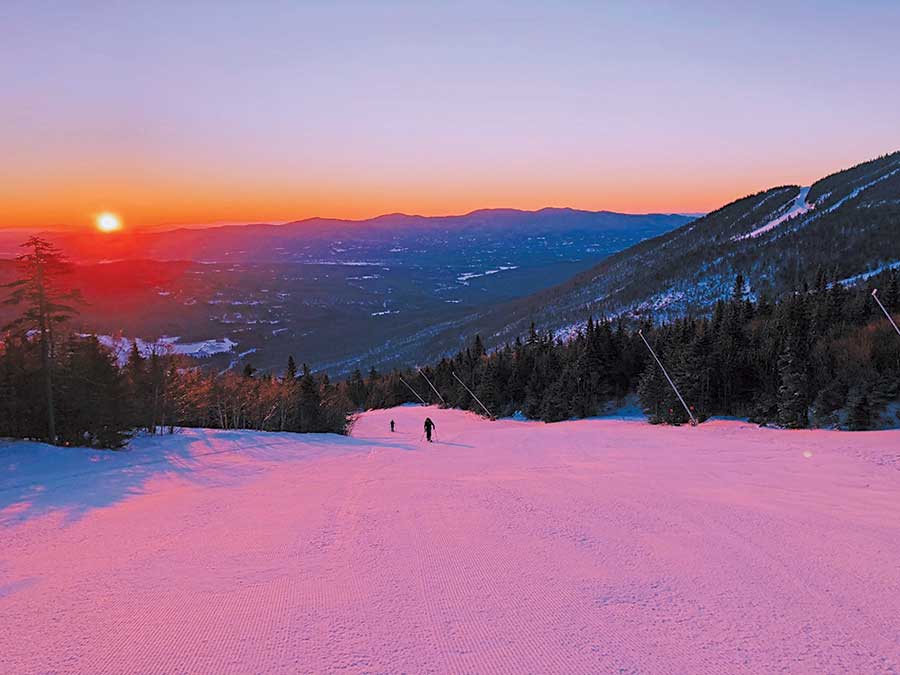 Sun reflects off my constantly dusty windows, blinding me as I pull off one of the many dirt roads in Johnson. Once again, the Vermont winter has emptied my supply of wiper fluid. I hop out of the car.

The early February day feels more like spring than the depth of winter, and the pull off is riddled with puddles. My dog frisks around me as I slide into ski boots, then clip into my skis. Backpack slung over my shoulders, we begin the trek into the woods.

Only a few tracks snake through the snowy forest, which is evidence that most people are slashing turns up at the resort. It also means that the lift lines are probably spilling past the ropes, since the day is absolutely gorgeous.

When you think of skiing, you probably imagine gliding upward on the chairlift and then carving turns back down fresh corduroy. Or maybe you imagine spraying powder and launching off cliffs. It’s safe to say, though, that most people don’t imagine skiing uphill.

However, for as long as people have been skiing downhill, uphill travel has, of course, been around. Since the invention of skilifts most people take the easy way up. While there has always been a contingent of people who like to “earn their turns” by skiing uphill, there has been a recent flood of skiers to the touring world.

So how does this even work? Essentially, climbing skins made typically made from synthetic hair are attached to the bottom of your skis. With your toe still held in place, and your heel left free, you just stride right up the mountain on your skis. While it might seem miserable, there’s something to be said for the feeling of getting up the hill by your own devices. While skinning certainly isn’t for everyone, many people love the experience and the blend of exercise along with the thrill of skiing downhill.

“I’m always more happy when I climb up than when I ride up. My body appreciates it more and I just feel more healthy,” says Andrew Lafrenz, a longtime skier. “I think it’s an amazing sport.”

This change in emphasis really sets up another aspect of the sport. Now, instead of focusing on the downhill portion, a huge percentage of your time is actually spent traveling up the mountain.

“It seemed like a fun challenge,” said Jensen Beach, a relative newcomer to the sport. “I like the variation of being able to ski at a resort and also to get some alone time. I’m not all that experienced with backcountry skiing, at least not compared to a lot of folks here in Vermont, but I enjoy being outside and I like the exercise.”

Other people echo the sentiment that ski resorts can just feel too crowded.

“I think getting into backcountry skiing was a combination of getting into a skiing accident and just becoming averse to crowds of skiers,” says Erin Carr, another new backcountry skier. Since her ski accident, which involved a serious concussion and broken arm, she says she has barely skied at resorts at all, deciding to stick mostly to touring.

Some people are even blunter when it comes to spending time at the ever-crowded ski resorts in Vermont. “There’s a lot of people in the world.” says Andrew Bunting, a splitboarder. “I don’t like them, and I don’t want to see them when I’m snowboarding,” he says. “So I started splitboarding so I don’t have to see people.”

Splitboarding, which is essentially backcountry snowboarding, is similar to skiing, but your board breaks into two pieces for the climb up and then slides back together for the ride down.

A lot of people who backcountry ski or snowboard do it in pleasant conditions. Beautiful, warm, sunny spring days are ideal. Even cold, snowy days are fun if you know that there’s a powder stash that you’re climbing to. However, a rare few love the sport for the pain that uphill skiing entails.

Climbing time changes from slope to slope, but Sterling Mountain, a common place to skin at Smugglers’ Notch, takes about an hour to climb. In addition, these climbs are usually made in the dark, either in the early morning or late evening, when the mountain is closed. In addition, there is the ever-present wind chill and blowing snow to combat on your way up the mountain.

“Waking up early on a sub-zero morning and touring to the summit of the mountain for the sunrise is one of the best ways I can think of to start a day,” says Jesse Schloff, an avid uphill traveler. “It fills the soul.”

No matter why people have gotten into it, the recent popularity has thrown flocks of ascending skiers onto the slopes of ski resorts, especially early season, when the snow cover in true backcountry is too sparse to allow for safe skiing.

But the sport began gaining popularity well before that. “As close as we can nail it down, Smuggs first came out with an uphill policy in the 2014/15 season,” he says. “The groomers have complained about it for many years now, but in terms of the numbers that we have seen recently, I would say it’s been really the last three years.”

This influx of skiers has led, unfortunately, to numerous issues.

“In terms of abiding by our policies, 90 or 95% of people will do that. But then there’s that 5 or 10% of people that show up that are clueless,” Delaney says.

Black Mountain Resort in New Hampshire has long been receptive to uphill travel and even encourages it. However, this comes with a basic understanding.

“It is your responsibility as a mountain guest to educate yourself,” the resort said in a recent letter to all uphill travelers. “It is a simple request that you find the policy, read the policy, and adhere to the policy. The policy is not up for debate, it is not up for interpretation, and applies to you- yes, even if you consider yourself a local.”

Policies differ by mountain. Many, including Suicide Six, Bolton, and Sugarbush, have trails through the woods for uphill skiers. Others, like Stowe and Smuggs, allow uphill travel up specific, on-trail routes before and after regular operating hours.

No matter what, following the policies is extremely important from a safety standpoint. Steep ski trails are groomed by a 10,000 pound snow cat, which is dragged uphill by a winch cable; the cable is under a massive amount of tension. In the dark, this cable is basically impossible to see, but it’s potentially deadly.

Recently, Sugarbush resort had a particularly concerning incident. “Two skiers hit the winch cat cable, ejected from their skis, and then skied off before our cat operator could turn around to get up to them,” their blog reports.

Luckily, there were no serious injuries, but it could have been much worse. If the cable is damaged, a massive piece of machinery could be sliding down the mountain – with the driver stuck inside.
Resorts often have flashing signs and strobe lights marking trails where winching is in progress, but some skiers and snowboarders choose to ignore them, causing extremely dangerous situations.

Another issue resorts have seen is the presence of dogs. Not only is it dangerous if a skier is cut off by a dog, but it’s also hazardous for the dog itself. Many skiers have stories about a friend of a friend accidentally slicing their dog open as they skied.

To help prevent this risk, most ski resorts have explicit rules stating that dogs are not allowed. Instead, skiers have to find places in the backcountry if they want to bring their furry friends.

Finding that backcountry route can be difficult, considering many people want to keep their spots from becoming overridden by skiers.

Since so many people are getting out into the backcountry to avoid the crush of people at resorts, it’s tough to reconcile more people in the woods.

“I found the community to be super welcoming,” says Katie, who has been backcountry skiing her whole life. “But I wouldn’t post online ‘Where should I go’ and expect people to give their spots up. Because I would never give my spots up like that.”

This is a common sentiment, especially since people put a lot of time and effort into maintaining their own backcountry trails.

“I think there’s a lot of people that would be happy to support you as your friend,” Lafrenz says. If you don’t have friends to take you, though, he thinks it would be hard to find people willing to bring you along with them.

This safeguarding of spots is a common theme in many outdoor activities.
For example, many swimming holes that used to be locals-only have come into the limelight through blogs and books detailing their beauty.

Similarly, there used to be a stretch of woods next to Sugarbush that many locals used for backcountry skiing.

When Sugarbush acquired the land for their resort, they started guiding newcomers to the site.
From a safety standpoint, this is a sensible decision; it lowers the number of uphill travelers on groomed trails, which makes grooming and snowmaking easier and safer.

However, those who had been accessing the slope for years were disappointed by the increased number of skiers.

Others are disdainful of this secrecy. “There’s lots of talk about keeping secret spots secret, etc., which I generally think is stupid,” Beach says. “The outdoors belongs to us all.”

When all is said and done though, there is unquestionably something really special about having the first tracks through glades blanketed in snow.

It’s a completely different experience when 30 people have come before you and scraped the majority of powder off.

If you put in the effort to make it up the mountain, you want the return to be worth it.

However, this gatekeeping of the sport seems to be born of an old boys’ club mentality, which is common in many sports. This makes it hard for anyone outside the usual demographic to break into the sport.

However, this is unintentional in most cases, and if you love it, the majority of people will respect you.
“It’s hard work, but the feeling lasts for the rest of the day, and that’s a great return for the effort,” Schloff says. “I can’t possibly knock anyone that gets joy from that!”