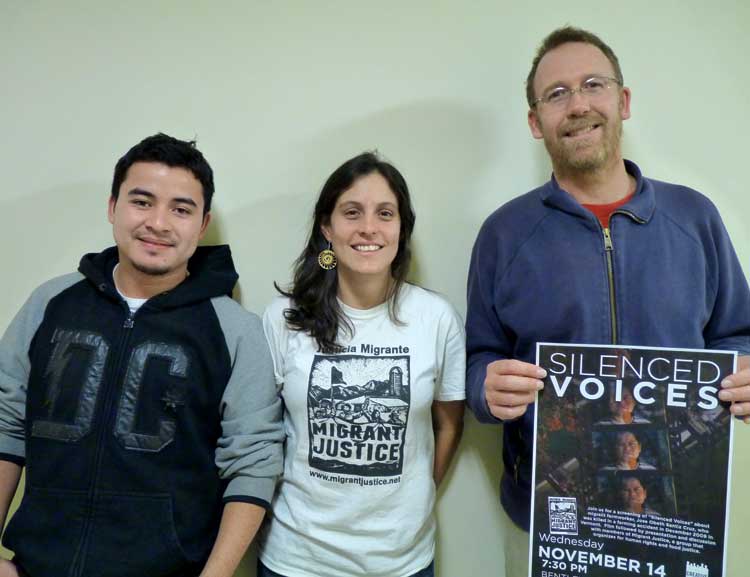 For generations, America has been extolled as the land of opportunity. But such a statement ignores the reality faced by the migrant community. When a young man newly employed in a job to provide for his family has his life abruptly torn away, the reality of the hidden struggles and exploitation is exposed. Too often isolation and fear enable human rights violations. Migrant Justice works to provide an avenue for migrant workers to protect their human rights, regardless of documentation status.

On Nov. 14, representatives of the non-profit organization came to JSC for a Creative Audience event to educate students about the realities of the hidden struggles of the estimated 1200 to 1500 migrant workers who sustain Vermont’s dairy farms. These workers endure dangerous conditions and 70 to 80-hour workweeks. Many are undocumented, and remain isolated to the farms where they live and work for fear of discovery and deportation.

Students and faculty watched “Silenced Voices,” a documentary about undocumented worker José Obeth Santiz Cruz’s death and repatriation back to his family in the state of Chiapas in Mexico. Cruz had only recently arrived in Vermont when he died in a farming accident in 2009. Migrant Justice estimates that about 30 percent of Vermont’s migrant dairy workers are from Chiapas. The film connected Cruz’s story with the benefits and hardships his community and Vermont dairy farms share, as both depend on the labor of migrant workers.

Cruz’s death and the production of the film served as the catalyst for the formation of Migrant Justice as a farmworker solidarity network that called attention to human and workers’ rights violations on Vermont’s farms.

Three founding members of Migrant Justice—Brendan O’Neill, Natalia Fajardo and Danilo Lopez—presented the documentary and held a discussion among the viewers after the screening. They stressed the point that they were showing farms where human rights abuses were taking place, and that many other farms were, by contrast, much better off.

During the discussion following the film, one student made the point that though the conditions migrants experience are often harsh, in many cases they are in the United States illegally. Fajardo replied: “Yes, folks are working here undocumented, but people have rights wherever they are. People don’t want to be undocumented at all; there is just no other option.” This is unfortunately true for many migrant dairy workers in Vermont because the work visa program addresses seasonal work, and dairy farms operate year-round.

O’Neill echoed Farjardo: “There is no line to get in, to get papers. It doesn’t exist. There is no program that exists to get documented status as a dairy worker in the United States.” In a separate interview, Fajardo explained that while Migrant Justice is supportive of immigration reform, the political process is so slow that the organization focuses its attention on multiple, smaller goals to make the lives of the workers more bearable.

Because of the fear of arrest and deportation, many undocumented migrants are afraid to leave the isolation of the small farms where they live and work. Some are even afraid to go outside at all because of border patrol helicopters passing overhead in their endless search for the so-called ‘illegal aliens.’ In the group discussion, Lopez, who is a migrant worker and coordinating committee member of Migrant Justice, noted that while the isolation remains, some progress has been made. “We have been able to make many improvements to the lives of migrant workers,” he said. “One of our big victories was changing the policy of state police. If police saw a person of color, they would assume and ask of immigration documentation and if [that person] couldn’t produce documentation then they would call border patrol and act as immigration agents.”

Migrant Justice is now working on getting the Vermont Legislature to pass a bill that will allow migrant workers to get drivers’ licenses. Because Vermont asks people to have a social security number to get a license, migrant workers are unable to drive, and by extension get their own food, or go to a doctor or hospital if they are ill or there is an emergency. “If there is someone in Vermont, whatever their status, whatever their nationality, whatever their situation, who is going hungry because they cannot get to the store that’s five miles away when they need to—that’s a human rights crisis,” said Fajardo. “Vermont did not require a social security number to obtain a driver’s license until 2004. There is no reason, there is no federal preemption, there is no law, there is nothing that prevents Vermont from giving drivers’ licenses to migrant workers.”

Associate Professor of Writing and Literature Tyrone Shaw stood up in support of Migrant Justice and the initiative for access to drivers’ licenses. “It’s a shame that a network of people is needed to provide transportation to doctors because these folks cannot get around in safety because they cannot even possess a driver’s license,” he said. “I just ask you all, put yourself in their place and imagine what a day in your life would be like. You’re working 70 or 80 hours a week, doing work that Vermonters won’t do, keeping the farms going. You have no transportation. You have no safety.  Just being here takes a degree of courage that none of us can imagine.”

During the event, O’Neill, Fajardo and Lopez passed around a petition to support the driver’s license bill, which is currently being considered in a study committee in the legislature. Fajardo encouraged students to support the proposed driver’s license bill in the next meeting of the committee on Dec. 13. After the committee produces a report, the bill will come up for voting in January.
O’Neill encouraged students to get involved in supporting the human and workers’ rights of migrant workers. “There are already three student groups formed to support farmworkers that are called ‘JUNTOS’,” he said in a separate interview. “The first was formed several years ago at Middlebury College. The second and third got off the ground last year at UVM and St. Mike’s.” O’Neill added that students could connect with Migrant Justice to get such a group going at Johnson. “It’s important that all people recognize where their food comes from and learn more about the issues that all workers face who put the milk and cheese on the table,” he said. “Young people across the country, and students in particular, have played important roles in supporting farmworkers’ rights and we hope that students at Johnson will join them.”

During the discussion, Shaw reiterated the importance of getting involved. “There’s a lot we can do in a state, in Vermont,” he said. “We can mobilize. We can sign this petition, but we can also reach out on a one to one level and offer help wherever it’s necessary.”