For Jeff Ketcham, Backwards Thursday is a step forward 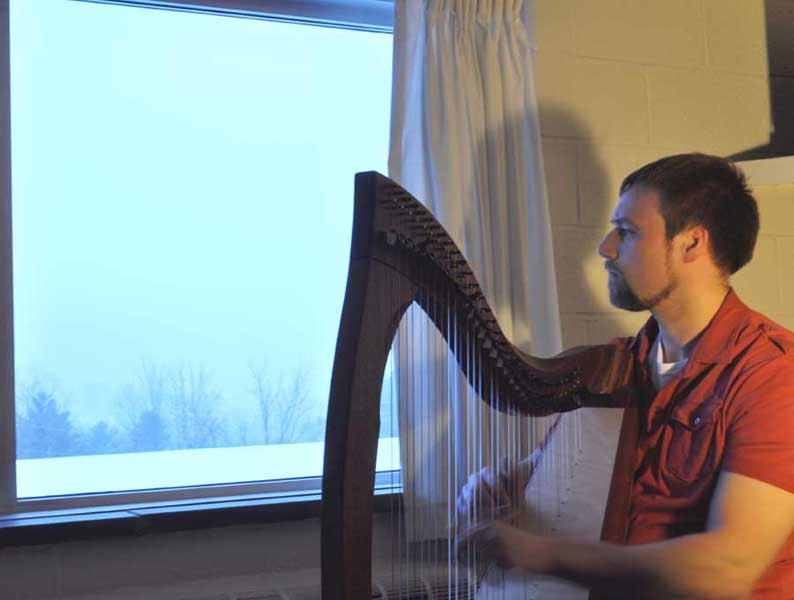 Jeff Ketcham relaxes with his harp

Nearly every Thursday, Jeff can be found walking backwards though the quad – to class, in the lunch line and around the dorms. This weekly ritual has been christened “Backwards Thursday.”

Students can frequently be heard cheering for Ketcham upon spotting him in motion, with his front side where his backside should be.

Originally my friend… he suggested I walk backwards for 24 hours, and I did, and I really liked it, and it was really fun. It was April 18, and it was right before Bicycle Day. And everyone was asking me what I was doing, and I’m just like, “I’m getting ready for Bicycle Day!”

Then the next day, April 19, there was a big tour with, like, a bunch of people on campus, like a big open house. So I decided to do it then, too, because a lot of people would be on campus.

Then the following Saturday, I could hardly use my calves. They really hurt, and I figured it worked a lot of different muscles out in my calves. And then I decided to do it once a week.

Does Backwards Thursday have any connection to your comedy career?

Kind of. I mean, I’m definitely sure that plays a factor in it. It mostly started with it just being really good for the calves.

I’m really into neuroscience, and there is research that shows if you’re in a moment where you have to think a lot, or like a stressful moment or something, taking a step back will actually help you process information better. So that’s a factor.

Do you mean a physical step backwards?

Yeah. So if you’re in a moment of anxiety or something, if you take a step backwards, your brain will actually process the information a little better. There is a lot of other cognitive research about it. Walking forwards is very automated, like we just don’t think about it, so walking backwards makes you think more, pay attention more, and also makes you more aware.

It also switches up the thinking of everybody around you, who are not used to seeing that. I mean around here they kinda are. It’s good for balance, mental function, cognition, awareness and perception.

Have you noticed any of these benefits?

Yeah, I have definitely noticed more. I feel more tuned every week when I walk backwards.

Have you ever punched a person in the face?

I don’t think so – why is that a question?

What’s the worst thing anyone has ever said to you?

I think probably that I was pathetic and going nowhere.

That’s harsh. What’s the worst thing you have ever said to someone else?

“Why don’t you get the fuck out of here, and have another beer before you leave!” And she almost crashed.

I think that’s the worst… no, I’ve definitely said worse.

How would you want to die if you could choose?

I would have thought you would say walking backwards into a bus or something.

Yes! Into a bus? No, into a snow bus or something.

Do you have a fitness routine beyond Backwards Thursday?

I go to the gym. I started doing Capoetta and Froumajou. Just what I can [do].

If you had to walk forward on Thursday to save your mother, would you?

Yeah, I’ve never thought about that.

So if someone were in danger, you would have to walk forward.

What is the Jeff philosophy?

Have you found anyone else who walks backwards?

I was told that there is a shaman in Hawaii who runs backwards. And there is a tribe out of Canada. Lewis E. Mehl-Madrona, he’s an author and also teaches classes here: I went to one of his workshops and his wife told me about some shamans in a tribe in Canada who also walk backwards, and I believe it’s also to raise awareness.

Do you think it’s for physical fitness?

I think that that’s probably a part of it. I know there is a whole kind of cultural aspect where people train for competitions and stuff.

Do you ever walk backwards barefoot to help with environmental awareness?

Is walking backwards a good way to meet women?

No, but it is a good way to meet people and start conversations.

I heard a story about a girlfriend in a swing…

Yeah, that was from a comedy routine. So I was with this girl, and she got me, got us, this sex swing for Christmas. And she broke up with me a few months later, and I kept the swing. So I just kept the swing because I got it.

So now I just wake up every morning and go for a swing. Get some perpetual motion going for the day.

How much weight can you calf-raise?

I haven’t maxed out my calves yet, I don’t think, but I would think I would max out around 170.

You play the harp. Where did your interest in the harp arise from?

Well, I’m not really sure. I don’t like to do things that everyone else is doing. I definitely like to do my own thing, be my own entity, kind of, and the harp, not a lot of people play it anymore. It’s just a big instrument, and it’s very magical. I really love it.

I do remember someone asking me what instrument I would like to play and I just said “the harp,” randomly, and I’m like, “I actually want to get into it,” so I looked into it. I mentioned it to Sally Mac – she also teaches here; she’s a homeopathy teacher. She mentioned it to a woman in Burlington who also plays the harp, and she got me in touch with her, and I started taking lessons in October of 2012. I got a harp over Christmas break 2013.

What kind of music do you listen to?

Lately I’ve been listening to a lot of classical piano music. I really listen to everything. I really like Pink Floyd, Nine Inch Nails, Jimmy Hendrix. It goes back and forth.

If you could have dinner with any five people, dead or alive, who would they be?

One would definitely be Frank Sinatra, because he was the Man and played beautiful music, and sang beautiful songs. I heard he was a crazy drunk and alcoholic, and I would really, really like to have a conversation with him.

Aldous Huxley, he wrote “Brave New World,” “Doors of Perception” – he would be an interesting person [to] get to talk about his views.

Albert Hoffman, I would really like to sit down with him and figure out what was really going on when he discovered the use of the ergot mushroom for LSD, and what he was actually trying to discover. I mean, I’ve read it was supposed to be because they were looking for a blood stimulant, because it was used to dilate the cervix during childbirth. Not LSD, ergot.

And the fifth, I’m not sure. Prometheus, if that counts.

Do you enjoy modeling naked or is it more about the money?

I mean, it’s just a job, but it is a very meditative job and experience.

Probably for the class.

For the class, not for you?

Not really for me. I mean, I can’t really sound too unprofessional about that. It is a profession.

What would you like to be doing in 10 years?

Some research that really advances mankind and the field of neuroscience. Perhaps help break through and understand what causes consciousness and perceived thought, because now all that is understood is really the different chemicals and different fluctuations and interactions of receptors and neuron transmitters in the brain.

But how we actually perceive thoughts and reality, and even this table, or being recorded, or how we have a conscious awareness in the dependant dynamic universe, that is not really understood. I really want to break through that and understand that, because I feel that there is a great potential in humankind itself.

I really believe in the human potential, and if we can unlock how consciousness works, I believe we can evolve even further and gain great – I don’t want to say powers, but for lack of a better word, yeah, powers. Like healing to telekinesis, parallel kinesis and flying.