Is Jeff’s El Dorado the golden one? 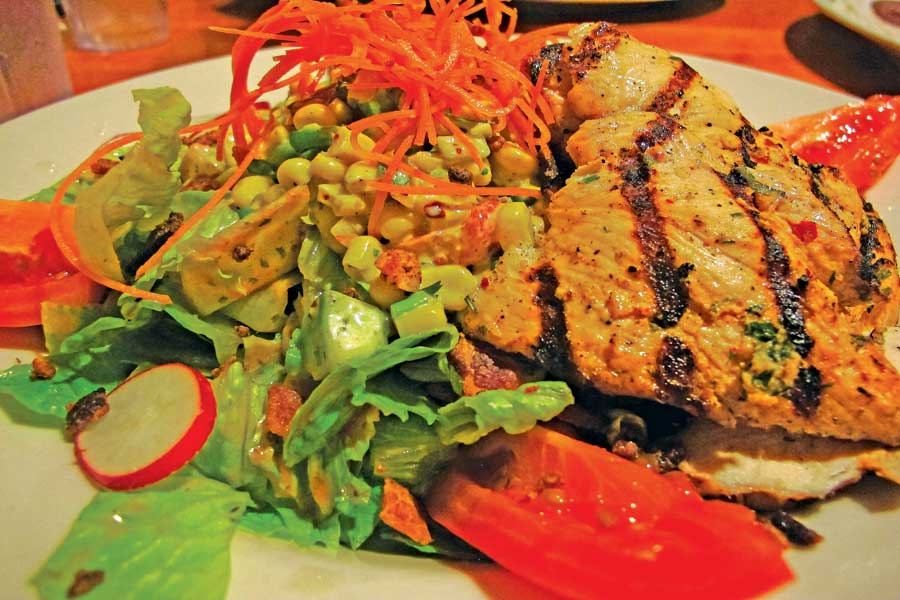 I had heard of a new Mexican joint in Jeffersonville, El Dorado, and decided to check it out to see if it could satisfy my ongoing desire for a chimichanga. I understood that the restaurant had changed ownership recently and hoped that the change was for the better. My girlfriend and I got into my car during the first snowfall of the year and made the drive to Jeffersonville.

Upon entering the restaurant I took notice of the large selection of tequila at the bar and the traditional Mexican artwork on the walls. The room was brightly lit, nearly too bright, and the seating area stretched a fair distance to the back. The restaurant is set in a large renovated barn and shares the barn with an antique store in the back that is open during the day.

After a friendly hostess seated us, a waitress promptly arrived at our table with a basket of tortilla chips and salsa. We ordered two seven-dollar Suave Gold margaritas off of the page-long margarita menu ranging in price from seven to seventeen dollar drinks.

The chips were made in house and had sugar and salt on them, which actually worked surprisingly well coupled with the salsa.
When the waitress returned with our drinks we decided to order an appetizer entitled Tres Amigos. This dish, priced at $8, came with three fried corn cakes roughly the size of a drink coaster, and each corn cake had a different topping.

One had a helping of smoked pulled pork that was slightly spicy and not flavored with traditional barbeque sauce but instead a kind of Mexican seasoning.

The next had spicy grilled chicken that was cooked to perfection, topped with seasoned corn and sour cream.

The last cake on the platter had a few pieces of smoky-tasting grilled shrimp, with cilantro and a kind of hot sauce.

The margaritas were strong and well-mixed with traditional tangy salt around the brim of the mason jar in which they were served. All the drinks at the restaurant were not frozen themselves, but rather served on ice.

Almost immediately after we had finished our appetizer, literally scraping the plate clean with our utensils, our waitress arrived with entrées. My dinner date, Dove, ordered the Pollo Esquittes, a Mexican-style grilled chicken salad. I ordered, as you may have guessed, the house chimichanga.

Both of our meals were reasonably priced: ten dollars for the Pollo Esquittes and thirteen for the Chimichanga. There were more expensive items on the menu like the tuna fish tacos for seventeen dollars or the fish tacos for fifteen dollars but I had come to this restaurant with one dish in mind and I would not allow tuna tacos to sway my desire.

Dove’s chicken salad came in a wide shallow bowl that was completely filled. She commented that the grilled chicken was possibly spiced similarly to the chicken in our appetizer and that it too was cooked to perfection. The chicken had picturesque grill lines and was laid atop an assortment of crispy greens and accompanied by mild corn salsa, bacon pieces, and a light avocado sauce.

I can attest personally to the deliciousness of this dish because, knowing that I would be writing this review, Dove allowed me to sneak my fair share of bites from across the table.

With the choice of steak, pork, or chicken, I ordered my chimichanga with pork after checking with the waitress that the pork would be similar to what we received on our appetizer. The size of the chimichanga was staggering, roughly the size of my forearm, and it was served with a traditional side of refried beans and rice. The tortilla was crispy enough to crack as I cut through it with my fork.

On the inside I found juicy pulled pork seasoned with an array of spices that kept the dish savory while maintaining spice.
I could hardly finish my meal but I was determined. Dove couldn’t eat all of her salad so we put it in a to-go container to enjoy the following day. Our bill was reasonable considering we ordered drinks. The service was good and our food was excellent. I hope that El Dorado is here to stay.