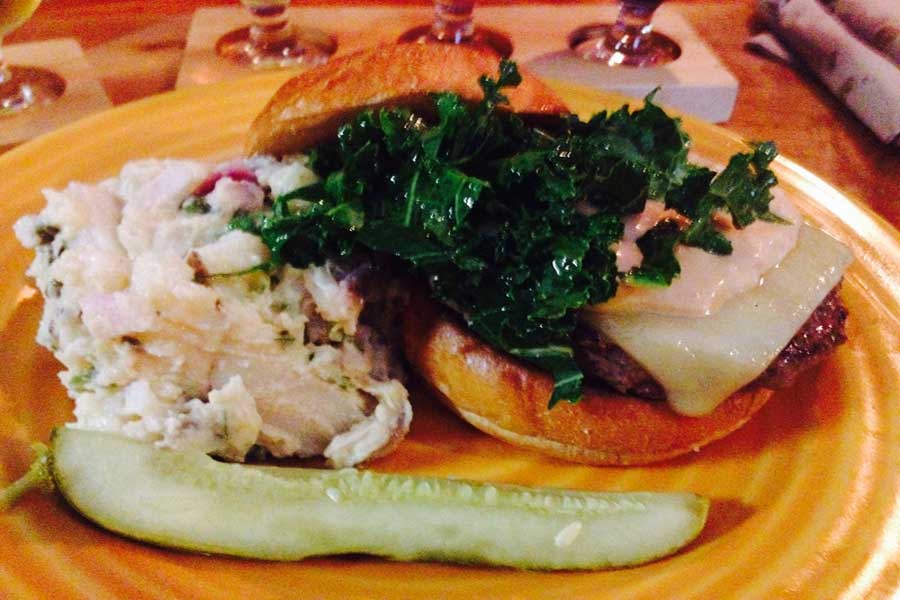 Big, gooey, juicy, salty, and savory; it’s the best damn burger you will ever eat.

It’s easy to drive right past this brew pub without even knowing it exists, but you would be missing an experience to be savored. Yes, eating this burger is not merely “enjoying a meal”; it is a magical, food-orgasm inducing, good ‘ole American experience.

After all, what is more American than a burger and a brew?

I will come out right away and admit Lost Nation Brewing has become my favorite restaurant in a 50-mile radius of Johnson, Vt. It’s located in the rear of a factory on the new Stowe-Morrisville by-pass and doesn’t look like much of a restaurant, from the outside.

Upon entrance, though, you feel immediately at home in the rustic and cozy barn-turned-tavern with its low lighting, wooden floors, and exposed wooden beams. The bar, which sits a cozy 10 people, expands along one side of the dining area, with several eight and four-person tables along the other side. They even have a windowed door through which you can see the huge and gleaming metal holding tanks of the brewery.

The bar currently features six taps which are brewed on-site by Lost Nation in addition to several guest beers including locals like Boyden Hard Cider, and the non-alcoholic options of KIS Kombucha and Rookie’s Root Beer.

Prior to my last visit, I had crowned the Saison Lamoille, a fruity, spicy, lighter brew, my favorite. But this time, I went for the sampler, which includes a 3 oz. sample of each Lost Nation beer, and the Gose stole the Favorite Crown. Comparable to watered down apple cider, yet still having a tart citrus-y flavor, this beer is dangerously enjoyable to drink and perfect for those of us who prefer a lighter tasting brew.

Dark beer lovers needn’t feel left out though because the Pitch Black Ale will most likely be their ‘pint of beer.’ Tolerable even for me, this beer has a smooth, rich, chocolate-y coffee flavor with a little bit of hop.

The Lost Nation food menu and specials board change daily, but it seems that one thing you can always count on being included is the Lost Nation Burger, and thank God for that. Served on an Elmore Mountain Challah roll with marinated greens, a remoulade sauce, and cheddar cheese, this burger, served bloody or burnt, is surely not going to disappoint.

The meat, which is sourced from cooperative farms in New York, Vermont, and New Hampshire, is juicy and has the best flavor I have ever experienced in a burger. Generally, when I go out to a restaurant, ordering a burger is the farthest thing from my mind, but at Lost Nation I can’t bring myself to order anything but.

Upon your first bite there will be juice rolling down your hands all the way to your elbows, but the waitresses, who are very familiar with the burger experience, always make sure to leave a stack of napkins. And for those of us who opt for the bloody burger, these napkins are a necessity.

In addition to the best burger of your life, you have the option of a rotating list of sides. I have found that both the German potato salad and the Dijon potato salad never disappoint.

After stuffing myself with beer, a burger, and potato salad, I somehow had room for desert. But how couldn’t I after seeing what they had to offer: a deep fried Deb’s apple cider donut with cheddar cheese, apple butter, and homemade whipped cream.

It was the perfect savory desert to complement a savory meal. The fried donut mixed with the sweetness of the apple butter, and the creamy saltiness of the cheese, topped off with the cold whipped cream really brought the whole meal together.

I dare you to find a better meal, atmosphere, beer, and service all in one place, for $23, within 50 miles.