Go figure: Badintegers try to work it out 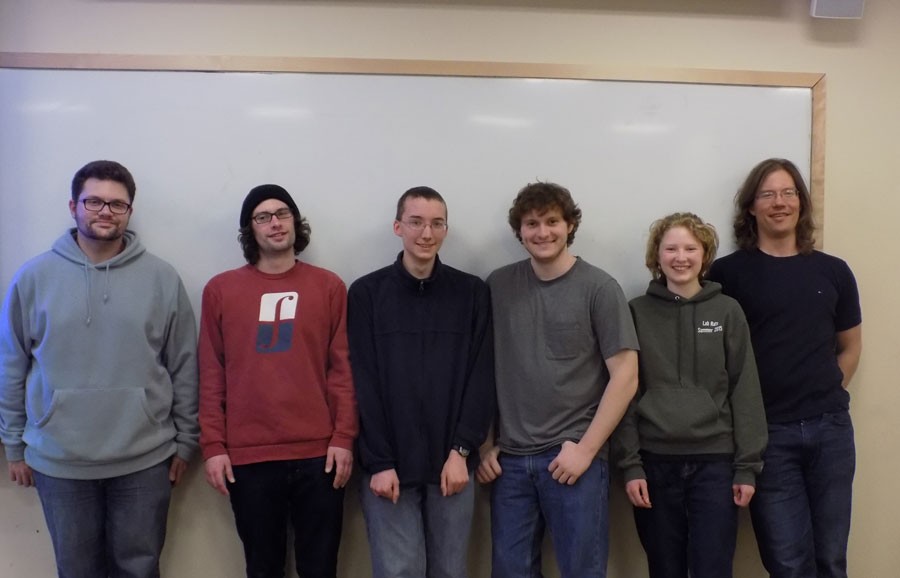 The Badintegers, Johnson’s new math club, may have only started last semester, but they are already preparing research for an upcoming math conference, designing tools for computer software, and, most importantly, having a good time.

The revival of Johnson’s math club was started by current Club President Shayna Bennett, who led initial conversations with Professor of Mathematics Greg Petrics during the fall 2015 semester about constructing a new math club.

“It was something that we worked on last semester. There had been a math club before, but it kind of fizzled out before my time,” says Bennett. “I was talking with Greg [Petrics] one day and mentioned the idea of starting a math club because the science club was starting, and I thought that we should have one. He was teaching a first-year seminar in mathematics . . . I stopped by one day and talked to that group, and actually quite a few of our members came from that.”

Typical club meetings, which are open to the public, consist of math homework, quirky puzzles, focused games of digital chess, and planning for fundraising events.

“We were working on a chess puzzle the other day, trying to figure out if white could get checkmate,” says Petrics. “They’re just these weird puzzles that don’t come up in any math classes, but they’re kind of fun and tricky, and maybe we figure them out, maybe we don’t.”

Although he is the club’s advisor, Petrics is content with blending in during meetings like any other student.

“From a nuts and bolts perspective, I just have to go a certain number of times and make sure I support the club’s endeavors,” says Petrics. “But how it works out is I try and just go and be another club member.”

Having just concluded a fundraiser which resulted in a $10 roll of quarters given to a randomly drawn student, the club is now preparing for the Hudson River Undergraduate Mathematics Conference at Saint Michael’s University in Colchester, Vermont on April 2.

Held annually at various colleges through New York and New England, the conference is an opportunity for students of mathematics to present their research and review the research of other students and faculty.

Bennett will be presenting a tool that she and her peers constructed in the mathematics and science software, GeoGebra, to simplify complex differential equations and provide quick solutions for users.

“The Hudson River presentation is on a tool we built in GeoGebra that allows the user to quickly look at the solutions to a differential equation,” says Bennett. “Differential equations are important for modeling in the sciences, but most scientists don’t have the skills to estimate solutions, or solve for solutions as the case may be. This tool removes that problem.”

Although Badintegers is an academic club based around a subject that is daunting to some, Bennett insists that the jovial atmosphere is enough to quell any anxieties students may have about mathematics.

“Right now we have a group of people [with] a lot of energy. There’s a lot of excitement,” Bennett says. “And I know [math] may seem a little intimidating in some ways, but during our meetings we have time to work on math puzzles. They can range from being, not ever easy, but kind of intuitive to mind-blowing.”

“We figured since it’s math, we can help people. And it’s a good way to interact with people and [help them] get their homework done,” says club member Will Dudley.

Both Bennett and Petrics stress that their meetings are all-inclusive and informal.

“A couple of people that have been coming are not math majors, they’re just enthusiasts, and I think that’s exactly what the club needs to fill the gap for,” Petrics says. “Maybe there’s people on campus who are interested in math, and they liked it, but for whatever reason they don’t feel like being a major, or taking more courses, but they know they wanna work on math puzzles and fun stuff. Anything like that.”

For Bennett, a chance to help students with math creates harmony between the club and her duties as an academic coach.

“Anyone who’s interested in math can come, and I also am hoping people who are not comfortable in math can come and we can help them,” says Bennett. “I’m an academic coach in mathematics, and I’d really love to see the positive things that I’ve seen there expand in the club.”