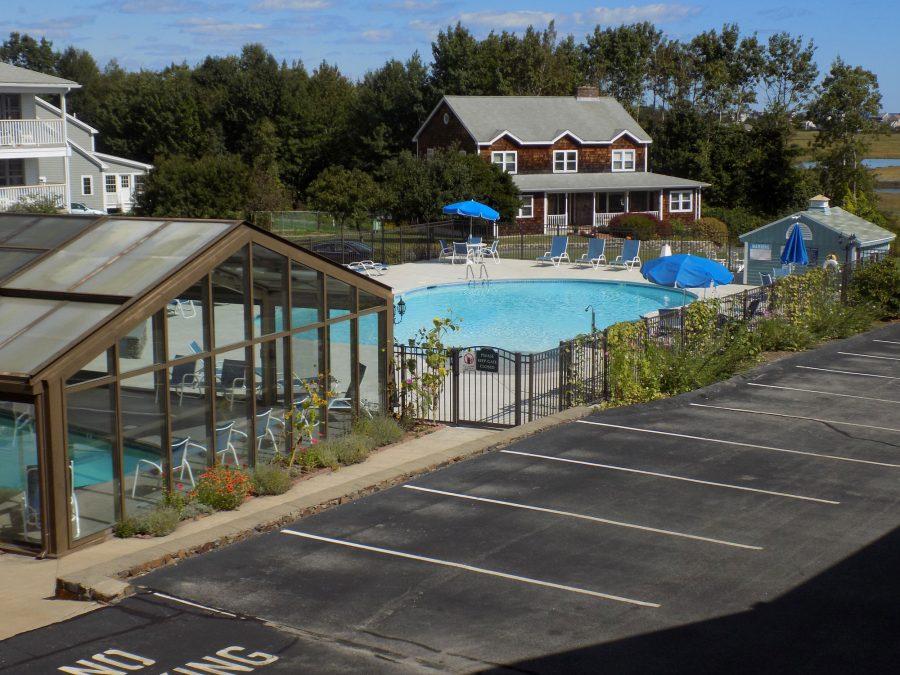 View of pool from motel balcony

Excited to get away for the weekend, I anxiously packed nearly every article of clothing into my already overstuffed duffle bag on Sep. 23. Along with my JSC cross country teammates, I departed east for a relaxing trip to Ogunquit, Maine, which included a five-mile memorial race called the Lobster Dash at Ogunquit Beach.

Before arriving at the Mariner Resort Motel in Ogunquit, the team needed some dinner. My five-man group agreed to eat at a Five Guys somewhere in a southern New Hampshire strip mall. I soon realized that Five Guys makes no attempt to mask that they are a fast food restaurant (ahem, Panera Bread).

And instead of five guys behind the counter, there were about 27 guys doing the same job. I ate a rendition of a veggie sandwich, which was really two hamburger buns and a crap load of rubbery vegetables. It was totally worth the three dollars I paid for it.

Saturday morning harbored a curious anticipation for the festivities of the 16th annual Ogunquit Beach Lobster Dash on Sep. 24. The race commemorates the life of Greg Gumbinner, a beloved local who frequented the beach as a runner. All proceeds collected benefitted the Gumbinner Memorial Scholarship Fund, along with other Ogunquit charities.

Most, if not all, of us on the cross country team had never raced on hard-packed beach sand before. Thus, the question of “How will my legs feel later?” sprang up several times before the race. The Lobster Dash began on Ogunquit Beach and led us to Moody Beach in Wells, Maine, before tracking back to the same location for a literal photo finish.

Racing on a beach is a unique experience. We are used to the tight and rugged trail systems common to many cross country races. This beach was wide open with tourists and locals alike clapping and pacing about on either side. The leader of the race could have stood aside for a smoke break and an episode of “Friends,” and would have still had time to beat everyone by a few minutes.

Overall, myself, Jason Harris, and Duffy finished 11th, 12th and 13th, respectively. Junior Brynn Cairns won the women’s race entirely, with freshman Emily McCarthy winning her division merely 23 seconds behind Cairns. The most important factor to this race, though, was seeing everybody smiling and laughing as we crossed the finish line in the radiant Maine sunlight.

After the race, I cautiously avoided the aroma of the lobster rolls being handed out. Being allergic to shellfish seems a cruel joke once you have completed a five-mile race to receive a t-shirt and a glass with a lobster printed on them.

For lunch that would not require an EpiPen, my group joined JSC alumni John Dabrowski and Steven Lamonde for lunch at Pizza Napoli in downtown Ogunquit. I chomped furiously at my savory eggplant parmesan to satisfy my growing post-race hunger. We sat on the shaded outdoor patio overlooking a busy Main Street, which was choked with tourists like us. I left Pizza Napoli with new date ideas and a warm first impression of the restaurant.

A leisurely walk downtown brought us to the rustic Harbor Candy Shop in downtown Ogunquit, where everyone was reduced to their inner 10-year-old. I left Harbor Candy gnawing on the most expensive piece of almond butter toffee I will ever have at $29 per pound.

Per our coach’s suggestion, we settled in for dinner at the Bull and Claw restaurant (a fancier way of saying “surf and turf”) back in Wells, off of Post Road. My glistening crispy chicken oriental was overpriced and drowned in ginger sesame dressing, but the subtle tang of the chicken and tender crunch of the leafy greens satisfied me enough to warrant multiple bites.

Our trip concluded with the only thing that could awaken a tired group of runners on a dew-glistened Sunday morning: a 7 a.m. track practice, followed shortly by a dip in the chilly Atlantic Ocean and some bizarre exercises to amuse the local beachgoers.

This is a team trip that I will remember for the sun-kissed fun of the Lobster Dash, the overpriced food and the close bonds we formed while awkwardly making conversation with a random Canadian tourist in a hot tub. See you soon, Ogunquit.